From Infogalactic: the planetary knowledge core
Jump to: navigation, search
For other ships with the same name, see Tsesarevich (ship).

Tsesarevich (Russian: Цесаревич) was a pre-dreadnought battleship of the Imperial Russian Navy, built in France at the end of the 19th century. The ship's design formed the basis of the Russian-built Borodino-class battleships. She was based at Port Arthur, Manchuria after entering service and fought in the Russo-Japanese War of 1904–05. Tsesarevich was the flagship of Admiral Wilgelm Vitgeft in the Battle of the Yellow Sea and was interned in Tsingtau after the battle.

After the end of the war, the ship was transferred to the Baltic Fleet and helped to suppress the Sveaborg Rebellion in mid-1906. While on a Mediterranean cruise, she helped survivors of the 1908 Messina earthquake. Tsesarevich was not very active during the early part of World War I and her bored sailors joined the general mutiny of the Baltic Fleet in early 1917. Now named Grazhdanin, the ship participated in the Battle of Moon Sound in 1917, during which she was lightly damaged. The ship seized by the Bolsheviks during the Russian Revolution in late 1917 and decommissioned the following year. Grazhdanin was scrapped in 1924–1925.

The ship was ordered as part of the "Programme for the Needs of the Far East", authorised by Tsar Nicholas II in 1898 to defend Russia's newly acquired ice-free port of Port Arthur in Manchuria. Russian shipyards were already at full capacity so the Naval Ministry decided to order ships from abroad. Specifications were issued on 14 June 1898 and a few days later the chief designer of the French shipyard Forges et Chantiers de la Méditerranée proposed a design based on that of the French battleship Jauréguiberry. The Naval Technical Committee approved the design with a few changes to which the French readily agreed. The General Admiral, Grand Duke Alexei Alexandrovich selected the French design over a competing proposal from the Baltic Works. A contract was signed on 20 July 1898 at a cost of 30.28 million francs (11.355 million rubles) for delivery in 42 months.[1]

Tsesarevich's most obvious design feature was her tumblehome hull. This had several advantages because it allowed greater freeboard since the narrow upper decks reduced the structural weight of the vessel's hull, it increased the field of fire of guns mounted on the sides, and it reduced the ship's roll in heavy seas. Its great disadvantage was that it reduced buoyancy and stability which contributed to excessive heel during turns. During the Battle of the Yellow Sea in August 1904, Imperial Japanese Navy observers thought the Tsesarevich was going to capsize when she suddenly turned out of the battleline.[2]

Tsesarevich's main armament consisted of two pairs of 40-calibre 12-inch guns mounted in center-pivot, electrically powered, twin-gun turrets fore and aft. The guns and their mountings were Russian-built, but the turrets themselves were made in France. The guns could be loaded at all angles of elevation and the turrets could traverse 270°. Trials revealed that the ammunition hoists tended to jam when the ship was rolling; the shipyard shipped new hoists to Port Arthur because the Russians wanted the ship in the Far East as soon as possible and they were installed in January 1904. 70 rounds per gun were carried.[2] The guns fired one shell every 90–132 seconds.[5] They fired a 731.3-pound (331.7 kg) shell at a muzzle velocity of 2,598 ft/s (792 m/s)[6] to a range of 16,010 yards (14,640 m) at an elevation of 15°.[7]

The ship carried four 381-millimetre (15.0 in) torpedo tubes; two of these were mounted above water in the bow and stern, and the two broadside underwater tubes were located near the forward 12-inch magazine. Tsesarevich carried a total of 14 torpedoes. The ship also carried 45 mines to be laid to protect her anchorage in remote areas.[2]

The ship was fitted with two Barr and Stroud coincidence rangefinders that used two images that had to be superimposed to derive the range. The gunnery officer then calculated the proper elevation and deflection required to hit the target and transmitted his commands via a Geisler electro-mechanical fire-control transmission system to each turret.[2][12]

Tsesarevich used the latest Krupp armor in a version of the French cellular armor scheme. This consisted of a full-length waterline armoured belt with armored decks above and below. Behind the belt were well-subdivided compartments mostly used to store coal. This was intended to keep the ship afloat regardless of the damage inflicted above the upper armoured deck. The waterline armor belt was 2 metres (6 ft 7 in) high, with 1.5 metres (4 ft 11 in) below the waterline at normal load. It had a maximum thickness of 250 millimetres (9.8 in) for a length of 60 metres (196 ft 10 in) amidships which gradually reduced to a thickness of 180 millimetres (7.1 in) at the bow and 170 millimetres (6.7 in) at the stern. The belt tapered to a thickness of 170 millimetres at its bottom edge amidships and presumably tapered proportionally along its length. Above the waterline belt was an upper strake of armour that was 1.67 metres (5 ft 6 in) high and had a maximum thickness of 200 millimetres (7.9 in). It was slightly shorter than the waterline belt and similarly reduced in thickness towards the ends of the ship. Forward it consisted of 120-millimetre (4.7 in) armour plates and 130 millimetres (5.1 in) aft.[13]

Above the upper armour belt there was a deck that ran the full length of the ship that consisted of a 50-millimetre (2.0 in) armour plate laid on 10-millimetre (0.39 in) deck plating. At the top of the waterline belt was two layers of 20-millimetre (0.79 in) armour. It also extended the full length of the ship, but not the full width; it curved downward behind the belt and was connected to the lower edge of the belt by a 20-millimetre plate. It continued downward to the ship's inner bottom plates and formed a sort of torpedo bulkhead. This bulkhead was 2 metres (6 ft 7 in) from the side of the ship and extended for a length of 84 metres (275 ft 7 in). It was backed with coal bunkers.[14] 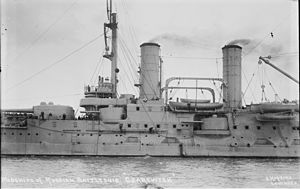 Construction began on Tsesarevich, named after the title of the heir to the Russian throne,[15] on 18 May 1899 at the Forges et Chantiers de la Méditerranée shipyard in La Seyne-sur-Mer, France. The ship was laid down on 8 July 1899 and launched on 23 February 1901. Construction was supervised by Captain Ivan Grigorovich, who became the ship's first captain. Tsesarevich entered service in August 1903 and was assigned to the Far East. She arrived in Port Arthur on 2 December 1903.[16] Upon completion, the Tsesarevich was the Russian Navy's best battleship at the beginning of the Russo-Japanese War.[17]

She was one of three ships to be struck by Japanese torpedoes during the surprise attack on Port Arthur during the night of 8/9 February 1904. Tsesarevich was hit abaft the portside torpedo bulkhead and the ship took on an 18° list that was partially corrected by counterflooding compartments on the starboard side. She got underway, but ran aground at the narrow harbor entrance. She was refloated and moved into the harbour for repairs that lasted until 7 June. Some of the ship's guns were removed during the summer to reinforce the defenses of the port. Tsesarevich lost a total of four 75-millimeter, two 47-millimeter and two 37-millimeter guns.[18] The ship was hit twice on 7 August by Japanese 4.7-inch (120 mm) shells fired at long range; a fragment from one of them lightly wounded Vitgeft.[19]

On the morning of 10 August 1904, the First Pacific Squadron sortied from Port Arthur in an attempt to break through the Japanese fleet blockading the port and reach Vladivostok. The Russian squadron consisted of six battleships, Tsesarevich, Retvizan, Pobeda, Peresvet, Sevastopol and Poltava, along with four protected cruisers and eight destroyers. The Japanese fleet, commanded by Admiral Togo, was comprised four battleships, Mikasa, Asahi, Fuji, Shikishima, two armoured cruisers Nishin and Kasuga, as well as seven protected cruisers.[20]

Tsesarevich and Pobeda both suffered mechanical problems within an hour of departure that forced the fleet to slow down to a speed of 13 knots (24 km/h; 15 mph). Togo failed in his attempt to cross the Russian's T after spotting them around 12:25 and a general engagement began around 13:25 with the Japanese ships concentrating their fire on Tsesarevich and Retvizan, but the effective Russian fire forced Togo to disengage around 15:20. He closed with the Russians about two hours later and opened fire at 17:35. Neither side was able to mortally damage any ships while the Russians were still in the lead with about a half-hour of daylight left when two 12-inch shells fired by Asahi struck near Tsesarevich's conning tower at 18:40. Shell fragments bounced off the conning tower's overhanging roof into the conning tower, killing Vitgeft, two staff officers and the helmsman. The ship turned to port with the steering wheel jammed and was followed by several other battleships. Tsesarevich became the focus of attention from every Japanese ship so the captain of Retvizan decided to charge the Japanese battleline to buy time for Tsesarevich to fix her steering problem. He succeeded in doing so and the squadron's second-in-command, Rear Admiral Prince Pavel Ukhtomsky gradually asserted command over the scattered Russian ships and ordered them back to Port Arthur in the darkness.[21] Tsesarevich attempted to head north to Vladivostok in the dark, but her damaged funnels greatly increased her coal consumption and reduced her speed to only 6 knots (11 km/h; 6.9 mph) so that she was forced to head for the German treaty port of Tsingtau instead with three destroyers for escort. Upon arrival the following day, Tsesarevich and her companions were interned and disarmed. The ship had been hit by thirteen 12-inch and two 8-inch (200 mm) shells[22] that killed 12 and wounded 47 members of her crew.[23]

At the end of the Russo-Japanese war, the ship was transferred to the Baltic in early 1906 and helped to suppress the Sveaborg Rebellion later that year. Around 1906, her fighting top was removed and her superstructure was cut down. The 75 mm guns in the superstructure were apparently removed as well. Tsesarevich made regular winter cruises to the Mediterranean before World War I and aided survivors of the Messina earthquake in December 1908. In 1909–10 the ship's machinery was overhauled and her amidships casemated 75 mm guns were removed and plated over four years later. Tsesarevich was not very active during the early part of World War I and she reportedly received two 37 mm anti-aircraft guns during the war. Because of her inactivity her bored sailors joined the general mutiny of the Baltic Fleet in early 1917. She was renamed Grazhdanin (Russian: Гражданин (meaning Citizen)) on 13 April 1917 after the February Revolution.[24] The ship took part in the Battle of Moon Sound in October 1917. During the climatic part of the battle, Grazhdanin engaged the German minesweepers on 17 October with little effect while Slava engaged the German dreadnoughts König and Kronprinz. The latter fired at Grazhdanin and hit her twice, killing one and wounding four crewmen, although neither hit caused significant damage. The German dreadnoughts outranged Grazhdanin, and she was forced to retreat and abandon Moon Sound in the face of German pressure.[25]

By December the ship was in Kronstadt, where she came under the control of the Bolsheviks, and she was hulked there in May 1918. Grazhdanin was scrapped beginning in 1924, although she was not officially stricken from the Navy List until 21 November 1925.[26]