In spite of great influence of Byzantine legislation on the contemporary world, and in spite of great cultural and commercial ties between Byzantium and Rus', the Russkaya Pravda bore no similarity whatever to that of the Byzantine Empire. The laws of Rus' were more humane than the legislation of contemporary East European states. The absence of capital and corporal punishment rather reflects the Norse way of thought.[9][10] 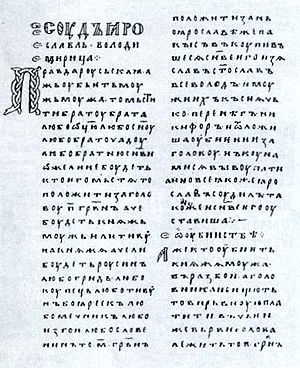 Three recensions of Russkaya Pravda are known: the Short Edition (Kratkaya), the Extensive Edition (Prostrannaya), and the Abridged Edition (Sokrashchyonnaya). Over 110 extant copies dating from the 13th to the 18th centuries are preserved, included in various manuscripts: chronicles and compilations. Of these, over 100 copies, including the oldest preserved, are of the Extensive Edition.

This code was discovered by the historian Vasily Tatischev in the text of one of the Novgorod chronicles and brought to the attention of the Russian Academy of Sciences in 1738. The first commented edition of the text was published by August Ludwig von Schlözer in 1767.

The spelling debate focuses on the interpretation of the word. While 'Russkaia' with two "S"s is easily understood and translated as 'Russian', the modern Ukrainian viewpoint implies that modern Russia and Rus' were different identities.[citation needed] This view is challenged by some linguists on the basis of the language used in the document who claim that spelling the word "Ruskiy" (Russian) with one S was commonplace[citation needed] at the time; in fact it is the prevalent for centuries after Russkaya Pravda was written, and can be found in a large amount of instances, both in Kiev and Moscow.[peacock term] An often quoted example is Ivan the Terrible's correspondence from the 16th century. Other linguists claim that the spelling with two s's only became more common in the 17th century, and only became standard after Lomonosov's Grammar was published in 1755.[peacock term] 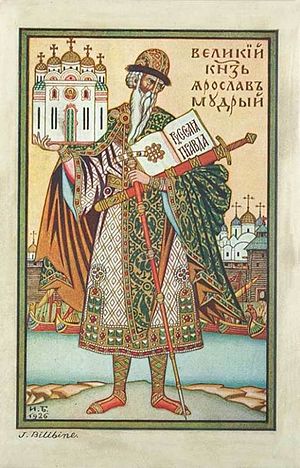 The term is translated as "Justice of the Rus'", as in the Latin "ius russicum". One may also encounter the translation "Russian Truth", based on the modern meaning of the word "правда".

Pravda Rus'skaya’s legal regulations reflected the evolution of the social relations in the Rus' of the 11th-13th centuries. Common law, Knyaz legislation, and legal proceedings represented the basis of “RP”.

The Yaroslav’s Law comprised legal regulations of feudal law along with the archaic regulations that could be traced back to the primitive communal system. According to a popular theory, it was promulgated in order to settle a conflict between Konstantin Dobrynich, a posadnik of Novgorod, and the Varangian population of the city.

Subsequent development and improvement of the Pravda Rus'skaya took place in times of Yaroslav’s sons and his grandson Vladimir Monomakh. New provisions are believed to have been added to Pravda Rus'skaya after the revolts in Kiev, Novgorod, and Rostov-Suzdal province in 1068–1071.

In the arising Russian state, the Pravda Rus'skaya was replaced in 1497 by the Sudebnik, the Code of Law. Several centuries earlier, new legal codes were promulgated in Pskov and Novgorod.

“Pravda Yaroslavichey” increased responsibility of a given community for killing knyaz’es soldiers, tiuns (“tiun”, a privileged servant of knyazs or boyars), starostas (“starosta”, a representative from the low-ranking administration of a knyaz), otroks (“otrok”, a low-ranking soldier in the army of a knyaz) and other servants on their own territory. “Pravda Yaroslavichey” provided severe punishment for arson, deliberate cattle mutilation, and collective encroachment on rich people’s property. After the 1113 Riot in Kiev, an exorbitant interest law was introduced that limited financial operations of moneylenders. 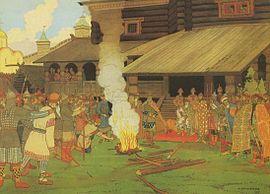 “RP” stabilized the system of feudal relations and social inequality. During 11th-13th centuries “RP” served the strengthening of feudal dependency of smerds (“smerd” – a feudal-dependent peasant), zakups (“zakup” - a feudal-dependent peasant, who could become free after paying off his “zakup”, a feudal loan), kholops (“kholop” – a feudal-dependent peasant, who could be killed or sold like a slave) etc. The Vast Edition of “RP” contains special regulations with regards to the status of zakups and kholops. “RP” also reflects the role of the court of knyaz’, a trend towards increasing differentiation of punishments and penalties, larger fines for the benefit of knyaz’ or his administration with correspondingly decreasing compensation to the victims.

In an attempt to abolish blood feud (that was quite common at that time), “RP” narrowed its “usage” and limited the number of avengers to the closest relatives of the dead. If there were no avengers on the victim’s side, the killer had to pay a fine (called “vira”) in favour of the knyaz’ and partial compensation to the relatives of the victim (the killer’s community had to help him pay his fine). If a woman were killed, one would have to pay half of the regular fine (called “poluvir’ye”, half of “vira”).

“RP” also defended the health and honour of the free members of the feudal society and had provisions about financial compensations for mutilation or an insult by word or deed. “RP” had a detailed system of punishments and penalties for larceny in a city or countryside, deliberate damage to forests, hunting grounds or lands, trespassing etc. It also regulated debt relations between individuals and contained articles of liability and hereditary law. Under “RP”, legal proceedings included witnesses, use of oaths or “ordaliy” (lat. ordalium, or “ordeal” in English, a kind of a last-resort test used to prove defendant’s innocence or guilt). The search for culprits included listening to witnesses, collecting evidence, or hot pursuit. Investigators had to check for false accusations, as well. These were the first steps towards forensic science.

From the Extensive Edition

1. If a man kills a man: then a brother avenges a brother, or a son avenges a father, or a cousin, or a nephew; if no one will take revenge, then 80 grivnas for the murdered; if he be a knyaz’s man or knyaz’s official; but if he be a rusin, or a grid' (a lower-ranking druzhinnik), or a merchant, or a boyar’s official, or a mechnik (swordsman), or an exile, or a slovenin (Novgorodian), then 40 grivnas for the murdered.

2. After Yaroslav’s death there was another meeting between his sons Izyaslav, Svyatoslav and Vsevolod, and their men Kosnyachko, Pereneg, Nikofor, and they changed the blood revenge for a fine; and the rest of his sons asserted as Yaroslav judged.

3. If anyone murders a man in a rampage, and the villain is not being sought, then the community where the victim's head lies pays a vera (fee to the knyaz) of 80 grivnas; or be he a commoner, then 40 grivnas (note: this was a fortune; a horse cost two grivnas, and a serf 1/2 grivna).

4. Whichever community pays the common vera (i.e. the fee for the murderer they're hiding or cannot find), several years they shall have to pay that, as the members are paying without the murderer. But if the murderer is known to the community, they shall help him with the payments; but only pay up to 40 grivnas, and the murderer pays the rest, and also contributes to his community’s 40 grivnas. Or if he murdered by accident, or at a feast, he shall pay thus.

Thus shall be on the guilt of rampage.

5. If there be a murder and robbery with no reason, then people shall not pay for the murderer, but give him up with his wife and children, and his property will be plundered.

6. If a person does not contribute to the vera, then the people shall not help him (in the future); he shall pay for himself.

11. But for a village supervisor, or the field work supervisor, 12 grivnas. And for a serf, 5 grivnas. Same for boyar’s.

17. And if one is accused of murder, but there are no acceptable witnesses, there shall be trial by iron. Thus shall be done for all grievances or thievery, if the accuser cannot provide proof, and the grievance is for less than half of gold grivna, then give him a trial by iron in captivity; if the grievance is for less than that, but more than two silver grivnas, then trial by water; if it is even less, then he must make an oath.

The Law of Vladimir I of Kiev

48. Volodimer Vsevolodich, upon Svyatopolk’s death, gathered his druzhina at Berestov: Ratibor of Kiev the general; Prokopiy of Belgorod the general; Stanislav of Pereyaslavl the general; Nazhir; Miroslav; Ivanok son of Chudin boyar of Oleg; and they set thus: to collect interest only until the third payment, if the lender takes the payments “in threes” (three payments of one half the debt each); if one takes from the debtor two shares, he can ask for the full debt then; but if he collected three shares, then will not ask for the full sum.

If a debtor escapes

52. If a debtor escapes from master, then a serf; but if he goes to search for money with his master’s permission, or goes to the knyaz with a complaint against his master, then won’t be made a serf, but be given a trial.

59. A serf may not be a witness; but if there are no free witnesses, then a serf caretaker may bear witness, but any others may not. And for minor cases a debtor may be a witness.

69. And if he steels bees, then 3 grivnas to the knyaz; and for the honey, if the beehive was full, 10 marten pelts to the victim; but if an empty hive then 5 marten pelts.

71. If a serf tortures a serf without orders from the knyaz, then pays 3 grivnas to the knyaz, and 1 marten pelt to the victim for his suffering.

72. But if he tortures a knyaz’s man, then 12 grivnas to the knyaz, and 1 marten pelt to the victim for his suffering.

79. If a barn is burned, then the victim’s house and property is plundered, after the damage is repaid, and for the rest he’ll be a serf to the knyaz; same for burning of houses.

80. And if one intentionally cuts a horse or other cattle, then he’ll pay 12 grivnas to the knyaz, and also repay the victim for the damages.

If a serf dies

85. If a serf dies, then his property goes to the knyaz; if he has unmarried daughters then some of the property will be given to them for dowry; if all his daughters are married they don’t get it.

On deaths of boyars or druzhina

86. If a boyar or a druzhina member dies, then his property does not go to the knyaz; and if he had no sons, then the inheritance goes to his daughters.

102. There are three types of serfdom: one buys a serf for up to half a grivna before witnesses, and gives a nogata to the judge before the serf.

103. A second serfdom: if one marries a serf woman without her master’s agreement; if he marries with agreement, then whatever they decide with the master, thus he shall be.

104. And this is the third serfdom: if one acts as someone’s official or servant without the master’s knowledge; if there is an agreement, then whatever they decide, thus he shall be. If he takes the master’s tasks, he’s his servant.

105. But for a debt of grain, one will not become a serf; but if he does not work it off in time, then he must repay it at once; but if he repays in full before the due date, he’s free.