The Russo-Turkish War of 1768–1774 was an armed conflict that brought Kabardia, the part of the Yedisan between the rivers Bug and Dnieper, and Crimea into the Russian sphere of influence. Though the victories accrued by the Russian Empire were substantial, they gained far less territory than otherwise would be expected. The reason for this was the complex struggle within the European diplomatic system for a balance of power that was acceptable to other European leading states, rather than Russian hegemony. Russia was able to take advantage of the weakened Ottoman Empire, the end of the Seven Years' War, and the withdrawal of France as the continent's primary military power (due to financial burden and isolationism).[4] This left the Russian Empire in a strengthened position to expand its territory but also lose temporary hegemony over the decentralized Poland. The greater Turkish losses were diplomatic in nature seeing its full decline as a threat to Christian Europe, and the beginning of the Eastern Question that would plague the continent until the end of the Ottoman Empire in the early 20th century. 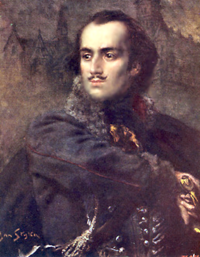 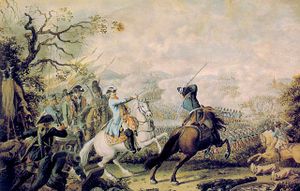 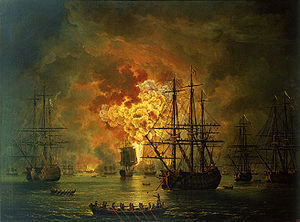 The destruction of the Turkish fleet in the Battle of Chesma, 1771
See also: Bar Confederation

The war followed the external tensions within Poland. The true power behind the Polish throne was the Russian ambassador Nicholas Repnin and the Russian army, with King Stanislaus Augustus Poniatowski being a former favourite of the Russian Empress Catherine II. Nikolay Repnin had forcefully passed the Perpetual Treaty of 1768 between Poland and Russia. This treaty was highly contradictory to the well being of Poland and led to massive revolts by nobility, church, and peasants.[5] In one fortified town called Bar near the Ottoman border an armed confederation was created on the 29 February 1768, led by a landed Polish noble named Casmir Pulaski.[6] The Russian army which heavily outnumbered the confederates defeated them in the Podolia of Ukraine. On the 20th of June 1768 Russia captured the fortress of Bar and the majority of the surviving confederates fled over the Turkish border.[7] It was easy for Repnin to suppress the revolts but he could barely keep up as they spread across the country, and Polish revolts would dog Russia throughout the war and make it impossible for Catherine II to keep control of Poland intact.[5] 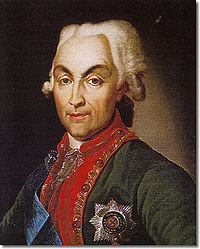 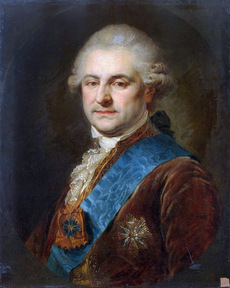 In the Ottoman Empire, revolts were widespread. Many noble factions had risen against the sultan’s power and would proceed to break away from the Ottoman Empire. In addition to this decentralization of the Empire the Ottomans were also faced with the revival of a unified Persia which rose to oppose the Turks in Iraq.[8]

Not content to see the enemy flee over the border Russian Cossacks followed into Turkey. At the Porte Mustafa III received reports that the town of Balta had been massacred by Russian paid Cossacks.[9] Russia denied the accusations. However the Cossacks certainly razed Balta and killed whomever they found.[10] With both the confederates of Poland, and the French embassy pushing the sultan along, with many pro-war advisors, the sultan on Oct 6 imprisoned Aleksei Mikhailovich Obreskov, and the entire Russian embassy's staff, marking the Ottoman’s declaration of war on Russia.[11] 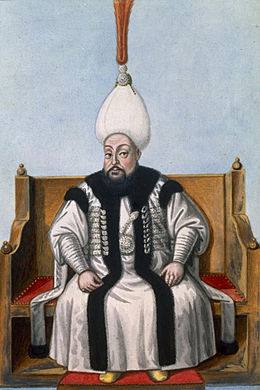 Mustafa III in his royal robes.

Upon the outbreak of the war the Ottomans seemed to have the upper hand in the face of Russia's lethargy and the threat of financial ruin as a consequence of Russia's involvement in the Seven Years' War.[12] The Turkish Navy capitalized on Russia's naval inferiority,[13] despite employing British officer to resolve this weakness, to dominate the Black Sea, giving it the advantage of shorter supply lines. The Ottomans were also able to levy troops from their vassal state, the Crimean Khanate, to fight the Russians[14] but their effectiveness was undermined by constant Russian destabilization of the area. In the years preceding the war the Ottoman Empire had enjoyed the longest period of peace with Europe in its history (1747-1768). Despite peace with Europe during this period the Ottoman Empire faced internal division, rebellion and corruption compounded by the re-emergence of a unified Persian leadership, under Nader Shah.[15] One clear advantage for the Ottomans was its superior numbers as the Ottoman army was three times the size of its Russian counterpart,[16] however, the new Grand Vizier Mehmed Emin Pasha would prove himself to be incompetent militarily.[17] For a long time the Ottoman military was considered to be more technologically advanced than Europe, however, the period of peace that preceded the war meant that the Ottomans fell behind in this regard.[17] Russia massed their army along the borders with Poland and the Ottoman Empire,[15] which made it difficult for Ottomans troops to make inroads into Russian territory. 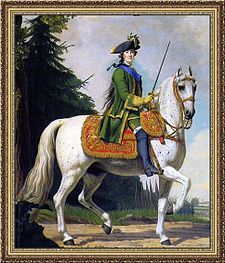 Equestrian portrait of Catherine in the Preobrazhensky Regiment's uniform

After her victories in the Russo-Turkish War 1768-1774, Catherine II was depicted in portraits dressed in the military uniforms of Great Britain which was at first a willing ally to Russia because of the trade between the two countries. Great Britain needed bar iron to fuel its ongoing Industrial Revolution as well as other products, such as sailcloth, hemp, and timber, for the construction and maintenance of its Navy, all of which Russia could provide.[18] When the tide of the conflict turned in Russia's favour, Britain saw fit to limit its support, seeing Russia as a rising competitor in far eastern trade rather than merely a counterbalance to France’s Navy in the Mediterranean. The withdrawal of British support left Russia in a superior position in the Black Sea but unable to do anything more than cut down its own supply lines and disrupt Turkish trade in the area.[15]

On September 17, 1769 the Russians began their initial campaign over the Dneister into Moldavia. The elite Ottoman Janissaries took heavy casualties from the Russians at Khotyn but managed to hold on, while the remainder of the Ottoman army panicked and abandoned the field and the Russians claimed the fortress. With the Ottomans in disarray the Russians took the capital of Moldavia (Jassy) on October 7. They continued the advance south into Wallachia, occupying its capital Bucharest on Nov 17.[17] From the capital of Bucharest the Russians fanned out through the principality, only later being challenged by Grand Vizier Mehmed Emin Pasha at Kagul on Aug 1, 1770. The Russian routed the Grand Vizier's forces and allegedly one third of the Ottoman troops drowned in the Danube trying to escape.[15] Just outside the city of Chesme on June 24, 1770, twelve Russian ships engaged twenty-two Turkish vessels and destroyed them with the use of fire ships. The defeat at Chesme demoralized the Ottomans, and bolstered Russian morale.[16] Catherine II used this and other victories over the Turks to consolidate her reign over Russia domestically by commissioning medals in honour of the battle. Despite their naval successes, the Russians were unable to capture Constantinople due to Ottoman fortifications, and because of European concerns that victory would destroy the balance of power.

Prussia, Austria and Great Britain offered to mediate the dispute between Russia and the Ottomans to halt Russia's expansion.[19] Austria managed to turn the situation to its advantage by gaining physical land concessions from the Ottomans with a treaty on July 6, 1771. The Austrians would maintain the increased military presence on their border to Moldavia and Wallachia, and increase a subsidy to the cash starved Ottomans (who had been dabbling in tax farming[20]), while also offering unsubstantiated support to the Ottomans against Russia. Catherine II, wary of the proximity of the Austrian army to her own forces and fearing an all-out European war accepted the loss of Poland and agreed to Frederick II’s partition of the country, and “secretly” agreed to return the captured principalities back to the Ottomans, thereby removing Austria’s fear of a powerful Russian Balkan neighbour. On April 8, 1772, Kaunitz, the Austrian equivalent of Minister of Foreign affairs, informed the Porte that Austria no longer considered the treaty of 1771 binding.[17] A ceasefire between Russia and the Ottoman Empire commenced on May 30, 1772, but real negotiations did not begin until August 8. The peace talks broke down almost immediately over the Crimea, but the truce was extended until March 20, 1773. Both parties had reasons to expand the negotiations, primarily to do with both sides wanting to keep fighting on a single front. The Ottomans were now quelling rebellions from Egypt and Syria, while also facing incursions from Persia. The Russians were facing a revival of a centralized Sweden, which had undergone a coup from King Gustavus III. On June 20, 1774 The Russian army under the command of Alexander Suvorov managed to rout the Ottoman Army near Kozludzha. Russia used this victory to force Turkey to acquiesce to Russia’s preferences in the treaty.[21] 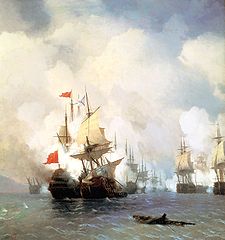 Minor fighting in the east

By this time Russia had a few troops spread out north of the Caucasus. In 1769 as a diversion they sent Gottlieb Heinrich Totleben south into Georgia. He besieged Poti on the Black Sea coast, the affair was mismanaged and Russian troops were withdrawn in the spring of 1772. This was the first time Russian troops had crossed the Caucasus. On the steppes north of the mountains the later-famous Matvei Platov and 2000 men fought 25000 Turks and Crimeans. The Cossack village of Naur was defended against 8000 Turks and tribesmen.[22]

File:Treaty of Küçük Kaynarca.svg
The Ottoman Empire ceded some land to Russia directly (red-green stripe) and indirectly via the independence of the Crimean Khanate (yellow-green stripe) which the Russians would annex in 1783.

On July 21, 1774, the Ottoman Empire had to sign perforce the Treaty of Küçük Kaynarca. The treaty did not overtly take away vast territories from the Ottomans - Poland had already paid the price of alienated territory. According to the treaty:

As a consequence of the treaty, the Ottomans ceded the northwestern part of Moldavia (later known as Bukovina) to the Habsburg Empire.[23]

Russia quickly exploited Küçük Kaynarca for an easy excuse to go to war and take more territory from the Ottoman Empire.[24]

This war comprised but a small part of the continuous process of expansion of the Russian Empire southwards and eastwards during the 18th and 19th centuries.