Rutgers University–Camden is one of three regional campuses of Rutgers University, New Jersey's public research university. It is located in Camden, New Jersey, United States. Founded in the 1920s, Rutgers–Camden began as an amalgam of the South Jersey Law School and the College of South Jersey. It is the southernmost of the three regional campuses of Rutgers—the others being located in New Brunswick and Newark.[3] The city of Camden is located on the Delaware River east of Philadelphia.

Rutgers–Camden began as the South Jersey Law School and the College of South Jersey. The schools were founded by a group of citizens led by Collingswood mayor and businessman Arthur E. Armitage.[4] In 1950, the two schools became the Camden campus when they merged with Rutgers, The State University of New Jersey. After decades of providing students with a comprehensive liberal arts curriculum, in 1981 Rutgers–Camden began to offer its first master's degree programs, in biology, English, and business administration. In 1989, the growing demand for business offerings led to the founding of the School of Business–Camden, the first business school in southern New Jersey to earn prestigious accreditation from the AACSB International. Rutgers–Camden achieved another academic first in 2007: launching the first doctoral program on its campus—and the very first of its kind in the nation—with the PhD degree in childhood studies. Today, Rutgers–Camden boasts two additional PhD degrees in integrative biology and public affairs. The business school offers a four-year undergraduate business curriculum along with MBA, professional master’s, and executive programs. The law school, ranked highly and nationally, boasts a new and impressive facility complete with a state-of-the-art moot courtroom. In 2011, the School of Nursing became the newest academic unit at Rutgers–Camden, providing health care institutions throughout the region with high-caliber nursing professionals.

College of Arts and Sciences

The College of Arts and Sciences is the largest academic unit at Rutgers–Camden. Students enjoy the advantages of a personalized liberal arts education as well as the benefits of studying at a campus of a research university, particularly the opportunity to work closely with distinguished faculty. Students have a broad choice of majors and programs in the humanities, the arts, the social sciences, and the natural and physical sciences, including those in traditional liberal arts fields as well as more professionally oriented courses of study. The College of Arts and Sciences also has a highly selective Honors College, which offers a challenging academic program that includes seminars, junior and senior year projects, and extracurricular activities. 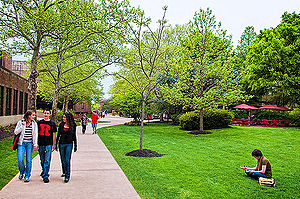 The Rutgers–Camden Center for the Arts provides performances, exhibitions, education programs, and community projects that inspire a full appreciation and enjoyment of the arts, create meaningful opportunities to participate in the arts, advance the central role of the arts in education, and increase awareness of the arts as essential to cultural, economic, and community vitality. The Fine Arts Building on the Rutgers–Camden campus houses the Walter K. Gordon Theater, Black Box Theater, and the Stedman Gallery, each hosting a variety of campus and community programs and serving as focal points for the visual and performing arts in the region from international touring artists and companies to local theater and student-derived works.

The Rutgers School of Business–Camden

The Rutgers Law School is a center of legal education. Its faculty is internationally recognized in a number of fields including constitutional, criminal, health, and corporate law. Its alumni are leading members of the bar in public and private practice settings throughout the nation. The school is well represented among the state and federal judiciary. The law school is a member of the Association of American Law Schools and is on the list of approved schools of the American Bar Association. It offers a three-year course of study for full-time students and a four-year, part-time program leading to the awarding of the Juris Doctor degree." [6]

The Rutgers School of Nursing–Camden

Paul Robeson Library Located in the heart of the Rutgers–Camden Campus, the Paul Robeson Library develops and maintains access to materials that support undergraduate and graduate coursework and research. A designated Federal Depository for the First U.S. Congressional District, the library serves as a public resource for the citizens of New Jersey. Library faculty deliver comprehensive support for reference and research questions. Through the Paul Robeson Library, the Rutgers–Camden community may access the global resources of the Rutgers University Library System and a host of online services. Recent renovations to the library include an upgraded student computing center and a new lounge area for study.

Law Library One of New Jersey’s largest law libraries serves as a research facility for law students, legal practitioners, and the general public. The Law Library houses a collection of over 440,000 books and other materials, and the collection is comprehensive in its holdings of American, English, Canadian, and foreign legal periodicals. The Law Library is located on three floors of the Law School Building. A selective federal depository, the Rutgers–Camden Law Library hosts numerous online collections of public documents related to federal and New Jersey courts.[7] 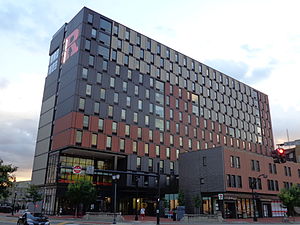 Undergraduate and graduate dorms are located at Third and Cooper Streets, and a graduate residence hall is located at 330 Cooper Street.[8] The twelve-story residence hall is the tallest building on campus. Many students live off campus in Camden's Cooper Grant neighborhood, in Philadelphia, or in surrounding suburbs such as Collingswood and Haddonfield, which are accessible through the PATCO Speedline.

Rail access to the university is provided by the PATCO's City Hall station, located two blocks from center campus, and the RiverLINE's Cooper Street - Rutgers University station. The Walter Rand Transportation Center is located a few blocks from campus, which provides access to several NJTransit bus lines. Additionally, the seasonally operated RiverLink Ferry running between Camden and Philadelphia has a stop at the nearby Adventure Aquarium.

As a service to students of the university, the Rutgers–Camden Police Department provides "a walking security escort for individuals to their vehicles; campus housing; the PATCO Hi-Speed Line station at Fifth and Market St.; and the Walter Rand Transportation Center on Broadway".[9]

Known as the Scarlet Raptors, Rutgers–Camden's athletic teams are a member of the National Collegiate Athletic Association (NCAA) and compete in Division III in the following sports:

In 2012 and 2013, Rutgers–Camden student-athlete Tim VanLiew won back-to-back NCAA Division III Outdoor Track and Field National Championships in the javelin. He won his first title on May 26, 2012, with a throw of 67.19 meters (220-05) at Claremont-Mudd-Scripps in Claremont, California. Nearly a year to the day of his first title, he not only defended his national javelin title, but he did so in record-breaking fashion. VanLiew’s throw of 75.55 meters (247-10) set the all-time NCAA Division III record for the new javelin, while shattering the NCAA Championship record, the University of Wisconsin-La Crosse stadium mark, and VanLiew’s old Rutgers–Camden program record in the process.

Rutgers–Camden's men's soccer team went a school-record 37 consecutive games without a loss, a record that spanned the 2012 and 2013 seasons. The team compiled a 32-0-5 record during that time, the eighth-longest streak in NCAA Division III men's soccer history. The team earned a trip to the NCAA Division III National Championship for the first time in program history by defeating Loras College, 3-2, in overtime on Dec. 6, 2013, in San Antonio, Texas. The unbeaten streak came to an end on Dec. 7, 2013, in a 2-1 double overtime loss to Messiah College in the NCAA Division III National Championship. The men's soccer team won three consecutive New Jersey Athletic Conference titles and in 2013 finished ranked No. 3 in the D3soccer.com Top 25 and No. 4 in the NSCAA national poll.

Approximately 6,600 undergraduate and graduate students attend Rutgers–Camden. Nearly 600 students live on campus. Renowned for its commitment for diversity, the student body is made up of students from 29 states and 33 countries. There are many clubs that represent various ethnic and racial groups, various religious denominations, political beliefs, and an LGBTQ club. There have been over 43,000 graduates as of 2016 [10] 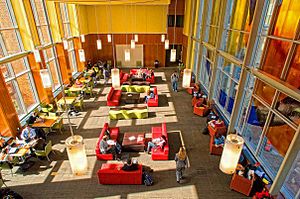 Clubs and other organizations 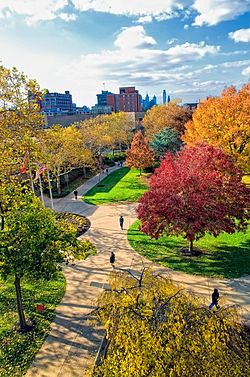 View of Rutgers Campus with Philadelphia skyline in background

There are over 40 clubs and organizations [17] on campus including: