Asawa was born in 1926 in Norwalk, California, one of seven children. Her father operated a truck farm until the Japanese American internment during World War II. The family lived in the assembly center at the Santa Anita racetrack for much of 1942, then at Rohwer War Relocation Center in Arkansas.[5]

Following her graduation from the internment center's high school, she attended Milwaukee State Teachers College, intending to become an art teacher. Unable to get hired for the requisite practice teaching to complete her degree, she left Wisconsin without a degree. (The degree was finally awarded to her in 1998.)[6]

From 1946 to 1949, she studied at Black Mountain College with Josef Albers.[7] Asawa learned to use commonplace materials from Albers, and she began experimenting with wire using a variety of techniques.[8]

In the 1950s, Asawa experimented with crocheted wire sculptures of abstract forms that appear as three-dimensional line drawings. She learned the basic technique while in Toluca, Mexico, where villagers used a similar technique to make baskets from galvanized wire.

“I was interested in it because of the economy of a line, making something in space, enclosing it without blocking it out. It’s still transparent. I realized that if I was going to make these forms, which interlock and interweave, it can only be done with a line because a line can go anywhere.”

Asawa's wire sculptures brought her prominence in the 1950s, when her work appeared several times in the annual exhibitions at the Whitney Museum of American Art and in the 1955 São Paulo Art Biennial.[9]

In 1962, Asawa began experimenting with tied wire sculptures of images rooted in nature, geometry, and abstraction.[10] "Ruth was ahead of her time in understanding how sculptures could function to define and interpret space,” said Daniell Cornell, curator of the de Young Museum in San Francisco. “This aspect of her work anticipates much of the installation work that has come to dominate contemporary art.”[11]

In 1968, Asawa created her first representational work, a mermaid fountain in Ghirardelli Square on San Francisco’s waterfront, in which she mobilized 200 schoolchildren to mold hundreds of images of the city of San Francisco in dough, which were then cast in iron.[12] Over the years, she went on to design other public fountains and became known in San Francisco as the “fountain lady.”[13]

Asawa had a passionate commitment to and was an ardent advocate for art education as a transformative and empowering experience, especially for children.[14] In 1968, she was appointed to be a member of the San Francisco Arts Commission [15] and began lobbying politicians and charitable foundations to support arts programs that would benefit young children and average San Franciscans.[16] Asawa helped co-found the Alvarado Arts Workshop for school children in 1968.[16] In the early 1970s, this became the model for the Art Commission's CETA/Neighborhood Arts Program using money from the federal funding program, the Comprehensive Employment and Training Act (CETA), which became a nationally replicated program employing artists of all disciplines to do public service work for the city. This was followed up in 1982 by building a public arts high school. The school was renamed the Ruth Asawa San Francisco School of the Arts in her honor in 2010.[17] Asawa would go on to serve on the California Arts Council, the National Endowment for the Arts in 1976,[15] and from 1989-1997 she served as a trustee of the Fine Arts Museums of San Francisco.[15] 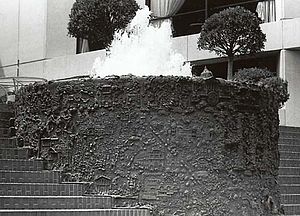