The names Ruthenian and Ruthene were historically applied to peoples speaking the eastern Slavic languages in Rus' (Русь), especially in the medieval kingdom of Kievan Rus', in the Grand Duchy of Lithuania and in Poland after Union of Lublin in 1569.

In its narrower senses, the exonym Ruthenian can identify ethnic Rusyns and/or inhabitants of a cross-border region around the northern Carpathian Mountains, including western Ukraine (especially Zakarpattia Oblast; part of historic Carpathian Ruthenia), eastern Slovakia and southern Poland. This area coincides, to a large degree, with a region sometimes known in English as Galicia (Ukrainian: Галичина, Halychyna; Polish: Galicja and; Slovak: Halič). The name Ruthenian is also used by the Pannonian Rusyn minority in Serbia and Croatia, as well as by Rusin émigrés outside Europe (especially members of the Ruthenian Catholic Church). In contrast, the Rusyns of Romania are more likely to identify as "Ukrainian".

During the early modern era, the term primarily referred to members of East Slavic minorities in the Austro-Hungarian Empire, namely Ukrainians and Rusyns, who today live in Ukraine, Poland, Slovakia, Romania, Serbia, Croatia, Hungary and the Czech lands. 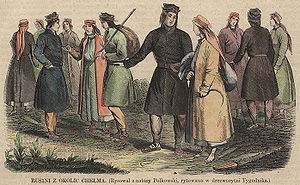 With the emergence of Ukrainian nationalism during the mid-19th century the term Ruthenian as an endonym declined among Ukrainians, and it fell out of use in eastern and central Ukraine. Most people in the western region of Ukraine followed suit later in the 19th century. After the expansion of Soviet Ukraine after World War II, groups who previously had not considered themselves Ukrainians were merged in to the Ukrainian identity.

In the Interbellum period of the 20th century, the term Ruthenian was also applied to people from the Kresy Wschodnie (the eastern borderlands) in the Second Polish Republic, and included Ukrainians, Rusins, and Lemkos, or alternatively, members of the Uniate or Greek Catholic Church churches. In Galicia, the Polish government actively replaced all references to "Ukrainians" with the old word "Ruthenians", an action that caused many Ukrainians to view their original self-designation with distaste.[1]

The Polish census of 1921 counted speakers of Belarusian, and Russian separately, but combined Ukrainians and Ruthenians as one category.[2] However the Polish census of 1931 counted Belarusian, Ukrainian, Russian, and Ruthenian as separate language categories, and the census results were substantially different from before.[3] According to Rusyn-American historian Paul Robert Magocsi, the Polish government's policy in the 1930s pursued a strategy of tribalization, regarding various ethnographic groups, i.e., Lemkos, Boikos, and Hutsuls, as well Old Ruthenians and Russophiles, as being different from other Ukrainians (although no such category existed in the Polish census apart from the first-language speakers of Russian.[3]), and offered instructions in Lemko vernacular in state schools set up in the westernmost Lemko Region.[4]

Originally Rutheni was a Latin name of Celtic tribe from the Ancient Gaul near contemporary city of Rodez.[5] According to Boris Unbegaun, the Latin Rucenus is a derivative of the Old Ukrainian rusyn.[5] The first use of Ruteni in reference to Kievan Rus was in the 1089 by Annales Augustiani.[5] Since then the word was associated with all East Slavs, but since the 16th century exclusively with modern Belarusians and Ukrainians (not including the modern Russians).[5] The modern Russian were known as Moscovitae.[5] Since partition of Poland Ruthenians were referred exclusively to the modern Ukrainians of Habsburg Galicia, Bucovina, and Transcarpathia.[5] On request of Mykhajlo Levitsky, in 1843 the term became official name for Ukrainians in the Austrian Empire.[5] A number of Ukrainian nationalists, such as Mykhailo Drahomanov and Ivan Franko, perceived the term as narrow-minded, provincial, and Habsburg-true members of intelligentsia and around 1900 more and more Ruthenians began to call themselves by the self-designated name Ukrainians.[5] Some Ruthenians who left for the United States soon after the fall of Habsburg Empire in 1918 refused to adapt to the change and the term became more prevalent to American people from the Carpathian Ruthenia.[5] In 1991 the government of Slovakia proclaimed a distinct national minority of Ruthenians who in Ukraine are known as Rusyns.[5]

Ruthenian and Ruthene were originally Latinised exonyms, based on the endonymic term Rusin an ethnonym applied to peoples speaking the eastern Slavic languages in the broad cultural and ethnic region of Rus' (Русь), especially the medieval kingdom of Kievan Rus' and the Grand Duchy of Lithuania.[6] The term "appealed to the Orthodox heritage and the tradition of Kievan Rus'-Ruthenia, and negated links with Catholic Poland. Excluding the Poles, this tradition assumed that Orthodox Belarusians (White Ruthenians), Ukrainians (Little Ruthenians), and Russians (Great Ruthenians) formed the three branches of the 'tri-singular' Russian nation."[7] After World War II, communist academics renewed the old tradition of referring to all related peoples of Kievan Rus as a single category of Ruthenians to question the legitimacy of Second Polish Republic by comparing its demographics of Poles and Ruthenians.[8]

Later "Ruthenians" or "Ruthenes" were used as a generic term for Greek Catholic, who inhabited Galicia and adjoining territories in the Carpathian mountains until the early twentieth-century; this group spoke dialects of the Rusyn language and called themselves Русины, Rusyns (Carpatho-Russians).

The language these "Ruthenians" or "Ruthenes" spoke was also called the "Ruthenian language"; the name Ukrajins’ka mova ("Ukrainian language") became accepted by much of the Ukrainian literary class in the early twentieth-century in Austro-Hungarian Galicia.[citation needed] After the dissolution of Austria-Hungary in 1918 the term "Ukrainian" was frequently applied to those Ukrainian-speaking inhabitants of Galicia who chose to identify themselves as Ukrainians.[citation needed] However, others chose to continue to refer to themselves and their language as Ruthenian rather than Ukrainian. Ruthenian and Ukrainian were listed as separate languages in the Polish census of 1931.[8][9] When commenting on the dissolution of Czechoslovakia in March 1939 U.S. diplomat George Keenan noted, "To those who inquire whether these peasants are Russians or Ukrainians, there is only one answer. They are Neither. They are simply Ruthenians."[10] Dr. Paul R. Magosci emphasizes that modern Ruthenians have "the sense of a nationality distinct from Ukrainians" and often associates Ukrainians with Soviets or Communists.[11]

According to Per Anders Rudling, during the World War I German authorities allowed the revival of Belarusian culture in Belarus and restriction of Russification.[12] After World War II, many Belarusians from the Eastern Borderlands (Kresy) region of pre–World War II Poland found themselves in displaced persons camps in the Western occupation zones of the post-war Germany. Therefore, to avoid confusion with the term "Russian" and hence "repatriation" to the Soviet Union, the terms White Ruthenian, Whiteruthenian, and Krivian were used.[citation needed] The last of these terms derives from the name of an old Eastern Slavic tribe called the Krivichs, who used to inhabit the territory of Belarus.

The designations Rusyn and Carpatho-Rusyn were banned by Joseph Stalin in June 1945.[6] Ruthenians who identify under the Rusyn ethnonym and consider themselves to be a national and linguistic group separate from Ukrainians and Belarusians,[11] were relegated to the Carpathian diaspora and formally functioned among the large immigrant communities in the United States.[6] A cross-European revival took place only with the collapse of communist rule (1989).[6] This has resulted in political conflict and accusations of intrigue against Rusyn activists, including criminal charges. The Ruthenian minority is well represented in Slovakia. The single category of people who listed their ethnicity as Ruthenian was created already in the 1920s, however, no generally accepted standardised Ruthenian language existed.[13]

After World War II, following the practice in the Soviet Union, Ruthenian ethnicity was disallowed. This Soviet policy maintained that the Ruthenians and their language were part of the Ukrainian ethnic group and language. At the same time, the Greek Catholic church was banned and replaced with the Eastern Orthodox church under the Russian Patriarch, in an atmosphere which repressed all religions. Thus, in Slovakia the former Ruthenians were technically free to register as any ethnicity but Ruthenian. [13]