From Infogalactic: the planetary knowledge core
Jump to: navigation, search
For other uses of "Ryazan", see Ryazan (disambiguation). 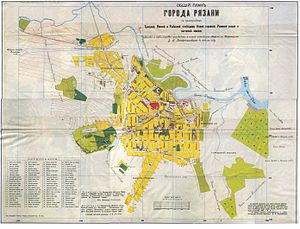 It is argued that the Ryazan kremlin was founded in 800, by Slavic settlers,[citation needed] as a part of their drive into territory previously populated by Finnic peoples.[citation needed] Initially it was built of wood, gradually replaced by masonry. The oldest preserved part of the kremlin dates back to the 12th century.

However, the first written mention of the city, under the name of Pereslavl, dates to 1095. At that time, the city was part of the independent Principality of Ryazan, which had existed since 1078 and which was centered on the old city of Ryazan. The first ruler of Ryazan was supposedly Yaroslav Sviatoslavich, Prince of Ryazan and Murom (cities of Kievan Rus').

The lands of Ryazan, situated on the border of forest and steppe, suffered numerous invasions from the south as well as from the north, carried out by a variety of military forces including Cumans, but particularly the Principality was in a conflict with Vladimir-Suzdal. By the end of the 12th century, the capital of Duchy was burnt several times by the armies of Suzdal. Ryazan was the first Russian city to be sacked by the Mongol horde of Batu Khan. On December 21, 1237, it was thoroughly devastated and never fully recovered. As result of the sack, the seat of the principality was moved about 55 kilometers (34 mi) to the town of Pereslavl-Ryazansky, which subsequently took the name of the destroyed capital. The site of the old capital now carries the name of Staraya Ryazan (Old Ryazan), close to Spassk-Ryazansky.

In 1380, during the Battle of Kulikovo, the Grand Prince of Ryazan Oleg and his men came under a coalition of Mamai, a strongman of the Tatar Golden Horde, and the Grand Duke of Lithuania, against the armies under the command of the Grand Prince of Vladimir, Dmitry Donskoy.

Late in the 13th century, the Princes of Ryazan moved their capital to Pereslavl, which is known as Ryazan from the 16th century (officially renamed in 1778). The principality was finally incorporated into that of Moscow in 1521.

Immediately after World War II, the rapid development of the city began. Ryazan became a major industrial, scientific, and military center of the European part of Russia. In the city, there were constructed giant factories, occupying the entire urban areas. Such establishments included the largest refinery in Europe, the Soviet Union's only producer of potato-harvesting equipment, Ryazselmash Plant accounting machines, a machine-tool plant, heavy forging equipment, foundry Centrolit chemical fiber company, instrument factory and others. Leading areas of industry are heavy and non-ferrous metallurgy, oil refining, and the machine-tool industry, mechanical engineering and food industries. More than half of the plants produce for export.

The military potential of the city also developed: Ryazan became the main training center of the Airborne Forces of the Soviet Union - a city surrounded by numerous training centers and military training-grounds. Several positions MANPADS protect urban sky. Besides the Airborne School, Ryazan hosts the Automobile School and Institute of Communications, the regiment of railway troops, airbase strategic bombers, and a training center in Diaghilev.

Ryazan developed particularly rapidly while Nadezhda Nikolaevna Chumakov served as Chair of the Council of People's Deputies of Ryazan and Ryazan mayor. Under Chumakova, the city's population increased more than seven times: from 72 to 520 thousand people. Chumakova oversaw the construction of social and cultural amenities, more than 20 urban areas, and hundreds of kilometers of trolleybus, tram and bus routes. Landscaping became a fundamental strategy for the development of the city at that time. A "green" ring of forests, parks, and garden associations surrounded Ryazan, with large parks located in each area of the city, and compositions of flowers and vertical gardening became customary, not only for the main streets, but also for industrial zones and factory buildings. Ryazan repeatedly won recognition among the cities of the Soviet Union for its landscaping. During her 26 years in office, Nadezhda Chumakov often accepted awards of the Red Banner of the USSR on behalf of Ryazan.

In September 1999, Ryazan became one of the cities involved in the Russian apartment bombings episode, though it did not actually experience a successful bomb attack.

In the Political system of Ryazan, the legislature, a city council is the Ryazan City Duma. Kind of the lower house of the municipality - Youth Parliament, preparing draft legislative initiatives. Executive power in the city of Ryazan carried by the administration headed by the mayor Vice Mayor - Svetlana Andreevna Goryachkina.Control over the activities of the authorities is administered by the Public Chamber of the city of Ryazan, work with youth involved in the headquarters of youth activists.

Ryazan is also a system of community councils areas which are deliberative bodies coordinating the work of services housing and communal services and the Department of Public Works on urban areas. In addition to the city, is also located in the complex regional authorities - Ryazan Oblast Duma, Government and the Governor of the Ryazan Oblast. In two urban and one suburban residence being received at the highest level. 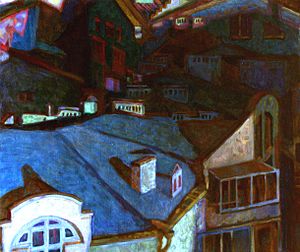 The city of Ryazan is divided into four administrative districts: Moskovsky, Oktyabrsky, Sovetsky, and Zheleznodorozhny.

Major industries in the city include electronics and oil refining.

Ryazan has a reputation of being one Russia's electronics hubs. Around a quarter of the city's population is affected by the electronics industry. The most notable company in this sector is Plazma (company), which produces plasma screens for products including tanks and locomotives. In 1994, the company created a 50-50 research and development joint-venture with the South Korean company Orion PDP. Plazma's expertise helped Orion PDP become one of the world's leading manufacturers of plasma television panels. In addition to plasma technology, Plazma produces LCD screens, industrial gas lasers and medical lasers. The company exports its products to foreign countries, including to the United States, China and Israel.[11]

Another key industry in the city is oil refining. The Ryazan Oil Refinery, owned by TNK-BP, is one of the city's largest employers. The plant can refine 17 million metric tons of oil per year.[11]

The economy of Ryazan benefits from a large number of skilled engineers graduating from the State Radioengineering University, and from the city's close proximity to Moscow, which can be reached in 90 minutes by car.[11]

The strategic bomber base Dyagilevo is just west of the city, and the air base of Alexandrovo is to the southeast as is the Turlatovo Airport. 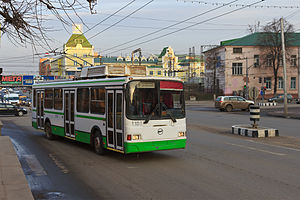 A trolleybus in Ryazan

An economically important educational institution in the city is the Ryazan State Radio Engineering University. The Higher Paratrooper Command Academy used to be Russia's only military school training officers for the airborne forces, giving Ryazan the reputation as the "paratrooper capital". However, in 2010 the institution discontinued enrollment to its paratrooper program, and now focuses on training professional sergeants for the armed forces.[11] The Gorky Library serves Ryazan as well as Ryazan Oblast. It is the largest library in the region.

Ryazan is one of the leading hubs for high-tech innovation and development in Russia. Thousands of students learn mathematics and engineering at Ryazan State University and Ryazan State Radio Engineering University. It is home to iAGE [1], whose solutions and technologies help companies automate their digital marketing data-driven campaigns. Software engineering company EPAM Systems has an office in Ryazan [2]. In 2012 Russian search giant Yandex launched the 40MW data center in Sasovo; it's expected to accommodate 100,000 servers by 2019.[13] In addition, one of the company operates in Ryazan is BiznesInterSoft, which develops latest-generation technologies - NoSQL-databases. [3]

Civil society plays an extensive role of city life . Ryazan constantly working several public oversight organizations. One of them is the Committee to Protect Ryazan Kremlin, founded in 2006 in opposition to the Federal Reserve to transfer ownership Archdiocese, in fact, operates all architectural and cultural supervision in the city. Thanks to the work of environmental organizations in Ryazan adopted a program to clean up illegal dumps, whose presence is indicated by the citizens themselves, created an arboretum, purified water areas [36] work "Green Patrol" .

Public Committee Ryazan cycling alone is building velomagistraley in the central part of the city. This activity attracted the attention of the authorities, who promise to build several similar highways passing through the whole territory of Ryazan.

Ryazan is the seat of Diocese of Ryazan and Kasimov, an eparchy of the Russian Orthodox Church. Assumption Cathedral of the Ryazan Kremlin is one of the most important cathedrals in the city. Metropolia is the holder of the majority of religious temples in the city and the sole holder of the monasteries.

Believers is the cathedral church of All Who Sorrow Church. In addition to them, the city is also located confessional institution Catholics, Lutherans, Baptists, autonomous church, Jehovah's Witnesses, Pentecostals, Charismatics and Muhtasibat Muslims for whom built the Islamic Cultural Center.

In the 1990s in Ryazan operated one of the largest gangs country - Slonovskii OPG. "Elephants" managed to monopolize the criminal market and downtown area. Starting in 1991 with racketeering and small game "thimbles", members of organized crime groups got to separation industries, motor vehicles, real estate, contract killings, armed attacks in the city and acts of terrorism. By 1995, they managed to briefly seize all the business market town, but already in 1996 Ryazan OCD started to apprehend criminals, which completely eliminate possible only by 2000. At the same time for the court hearing had to build the largest in Russia trial chamber. Former mayor and chairman of the Ryazan City Duma, Fyodor Provotorova, who ruled the city for 8 years, associated with the activities of this organization.

Today, according to the Russian Interior Ministry, the crime rate in Ryazan is one of the lowest among the cities of the Central Federal District. For example, in the first six months of 2012 amounted to 579.6 crime rate crimes per hundred thousand population. It's a bit more than in the whole region, but almost two times less than in the CFA, where the figure is 839. City, in addition to police calculations patrol students of military schools and voluntary militias, the headquarters of which are located in all city districts.

Ryazan is twinned with: