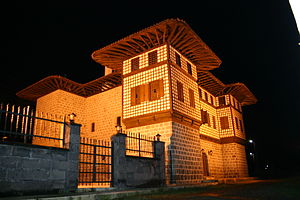 Sürmene (Greek: Σούρμενα, Sourmena; Ottoman Turkish: ﺳﻮرﻣﻨﻪ, romanized as Sürmena[/e]) is a town and a district of Trabzon Province in the Black Sea region of Turkey. In ancient times it was also known as Hyssus or Hyssos (Υσσός in Greek]) and Issiporto.[3]

The mayor is Rahmi Üstün (AKP).

The little town of Sürmene (Hamurgan) is situated some 40 km (25 mi) east of Trabzon. Known in antiquity also as Susarmia or Augustopolis, it lies on the River Kora (Manahoz Deresi) and is best known as the place where Xenophon and his Ten Thousand fell sick after eating wild honey, an event which was confirmed by the local people. In the village of Sürmene Kastil, 5 km (3.1 mi) to the west of Sürmene, stands a ruined medieval castle as well as the impressive 18th century Yapukoğlu Konağı mansion (Derebeyli Kale). It was formerly the seat of the Yapukoğlu family, who lived here as rulers (derebey) of the surrounding region relatively free of interference from the Sublime Porte in Istanbul.

Historically, Sürmene had produced small amounts of manganese. The area also had mineral springs, and shipped bottled water to Istanbul.[4]

Surmene county has had a lot educational institution since the first years of the Republic. As of today, Sürmene has a faculty (Surmene KTU Faculty of Marine Sciences), five vocational high schools, a high school and an Anatolian high school. In addition, there are many primary schools in the county. Also there is a student dormitory for university students' shelter in the county.

Surmene is one of the towns which have managed to become the leader of the Eastern Black Sea in terms of social life. In the years when the population number reached ten thousands there were 2 long-serving cinemas. Also before the construction of the Black Sea Coastal Road especially in summer months there had been a vivid social life. At that time the dynamism in the streets used to last to 02:00 a.m and the town used to present a vivid turism center. The extreme settlement which began in the year of 1955 caused the town to face with the same problem of the large cities: ‘’unplanned urbanization’’. And the same problem exist today. And also in long terms of construction, people living away from home got disturbed by the construction sounds and they gave up coming back to their homelands and this led to a downfall in the tourism receipts. In this context, the population of the town which is 13.000 today, it can not grow a significant rise in the summer moths. There are several sports club operating in various branches and a folk association. And also Sürmene Beneficial Association and Sürmene Culture and Tourism Association named Istanbul centered local civil society organizations are active in Sürmene. Even though there are many elementary and middle schools there is no alumni association for these schools.

According to WWF The most endemic flora tourf is exist in Ağaçbaşı yayla in Surmene.[1]