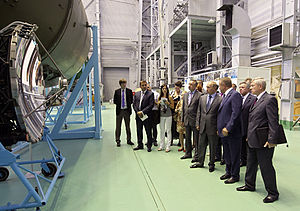 The company consists of the following subsidiaries and branches:[3]

The company was founded on 16 May 1946 and has been known successively as:

Korolev's design bureau was, beginning with the first artificial satellite Sputnik 1 and the first manned spaceflight of Vostok 1, responsible for a major part of the Soviet space program. It was the main rival of OKB-52 (later known as TsKBM, then the design bureau of Vladimir Chelomei) during the Soviet manned lunar programs and the Soviet space station program.[6] OKB-1 was among others responsible for the development of the manned Soyuz spacecraft and its Soyuz rocket, the N1 "Moon Shot" rocket, large parts of the Salyut space station program, the unmanned Progress resupply craft and designed the Energia rocket for the Buran space shuttle program. Since the early beginnings of the Luna programme it designed many space probes, among others of the Venera, Zond and Mars program.

The company continues to dominate a large part of the Russian space program, and a considerable part of the World's space program, with its Soyuz spacecraft having become the only crewed spacecraft conducting regular flights and the exclusive crew transport vehicle for the International Space Station after the Space Shuttle retirement. As of 2013[update] this will remain unchanged until a crewed US spacecraft from the Commercial Crew Development program will fly to the ISS – with the Chinese Shenzhou program being the only other program in the World with planned semi-regular crewed spaceflights.

The President of Energia, Vitaly Lopota was removed from his post as president on August 1, 2014. Dmitry Rogozin indicated that this was the start of "Long-awaited personnel reform in [the Russian] space industry ... Tough times require tough decisions."[5] Lopota was offered the position of vice president for technological development in the United Rocket and Space Corporation,[5] the new company formed in 2013 to re-nationalize the Russian space industry.[7]

Over the years the products of Energia and its predecessors included:

Including meteorological rockets as their modifications.