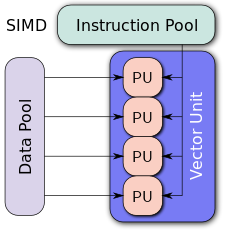 Single instruction, multiple data (SIMD), is a class of parallel computers in Flynn's taxonomy. It describes computers with multiple processing elements that perform the same operation on multiple data points simultaneously. Thus, such machines exploit data level parallelism, but not concurrency: there are simultaneous (parallel) computations, but only a single process (instruction) at a given moment. SIMD is particularly applicable to common tasks like adjusting the contrast in a digital image or adjusting the volume of digital audio. Most modern CPU designs include SIMD instructions in order to improve the performance of multimedia use.

The first use of SIMD instructions was in vector supercomputers of the early 1970s such as the CDC Star-100 and the Texas Instruments ASC, which could operate on a "vector" of data with a single instruction. Vector processing was especially popularized by Cray in the 1970s and 1980s. Vector-processing architectures are now considered separate from SIMD machines, based on the fact that vector machines processed the vectors one word at a time through pipelined processors (though still based on a single instruction), whereas modern SIMD machines process all elements of the vector simultaneously.[1]

The first era of modern SIMD machines was characterized by massively parallel processing-style supercomputers such as the Thinking Machines CM-1 and CM-2. These machines had many limited-functionality processors that would work in parallel. For example, each of 65,536 single-bit processors in a Thinking Machines CM-2 would execute the same instruction at the same time, allowing, for instance, to logically combine 65,536 pairs of bits at a time, using a hypercube-connected network or processor-dedicated RAM to find its operands. Supercomputing moved away from the SIMD approach when inexpensive scalar MIMD approaches based on commodity processors such as the Intel i860 XP [3] became more powerful, and interest in SIMD waned.

The current era of SIMD processors grew out of the desktop-computer market rather than the supercomputer market. As desktop processors became powerful enough to support real-time gaming and video processing, demand grew for this particular type of computing power, and microprocessor vendors turned to SIMD to meet the demand. Sun Microsystems introduced SIMD integer instructions in its "VIS" instruction set extensions in 1995, in its UltraSPARC I microprocessor. MIPS followed suit with their similar MDMX system.

The first widely-deployed desktop SIMD was with Intel's MMX extensions to the x86 architecture in 1996. This sparked the introduction of the much more powerful AltiVec system in the Motorola PowerPC's and IBM's POWER systems. Intel responded in 1999 by introducing the all-new SSE system. Since then, there have been several extensions to the SIMD instruction sets for both architectures.

All of these developments have been oriented toward support for real-time graphics, and are therefore oriented toward processing in two, three, or four dimensions, usually with vector lengths of between two and sixteen words, depending on data type and architecture. When new SIMD architectures need to be distinguished from older ones, the newer architectures are then considered "short-vector" architectures, as earlier SIMD and vector supercomputers had vector lengths from 64 to 64,000. A modern supercomputer is almost always a cluster of MIMD machines, each of which implements (short-vector) SIMD instructions. A modern desktop computer is often a multiprocessor MIMD machine where each processor can execute short-vector SIMD instructions.

An application that may take advantage of SIMD is one where the same value is being added to (or subtracted from) a large number of data points, a common operation in many multimedia applications. One example would be changing the brightness of an image. Each pixel of an image consists of three values for the brightness of the red (R), green (G) and blue (B) portions of the color. To change the brightness, the R, G and B values are read from memory, a value is added to (or subtracted from) them, and the resulting values are written back out to memory.

With a SIMD processor there are two improvements to this process. For one the data is understood to be in blocks, and a number of values can be loaded all at once. Instead of a series of instructions saying "retrieve this pixel, now retrieve the next pixel", a SIMD processor will have a single instruction that effectively says "retrieve n pixels" (where n is a number that varies from design to design). For a variety of reasons, this can take much less time than retrieving each pixel individually, as with traditional CPU design.

Another advantage is that SIMD systems typically include only those instructions that can be applied to all of the data in one operation. In other words, if the SIMD system works by loading up eight data points at once, the add operation being applied to the data will happen to all eight values at the same time. Although the same is true for any super-scalar processor design, the level of parallelism in a SIMD system is typically much higher.

Examples of SIMD supercomputers (not including vector processors):

Modern graphics processing units (GPUs) are often wide SIMD implementations, capable of branches, loads, and stores on 128 or 256 bits at a time. 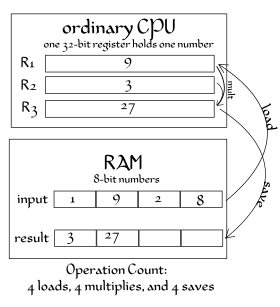 The ordinary tripling of four 8-bit numbers. The CPU loads one 8-bit number into R1, multiplies it with R2, and then saves the answer from R3 back to RAM. This process is repeated for each number. 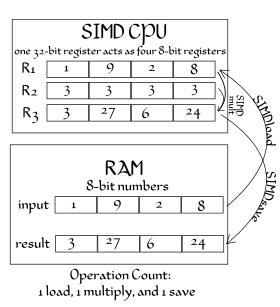 The SIMD tripling of four 8-bit numbers. The CPU loads 4 numbers at once, multiplies them all in one SIMD-multiplication, and saves them all at once back to RAM. In theory, the speed up is about 75%.

SIMD instructions are widely used to process 3D graphics, although modern graphics cards with embedded SIMD have largely taken over this task from the CPU. Some systems also include permute functions that re-pack elements inside vectors, making them particularly useful for data processing and compression. They are also used in cryptography.[2][3][4] The trend of general-purpose computing on GPUs (GPGPU) may lead to wider use of SIMD in the future.

Adoption of SIMD systems in personal computer software was at first slow, due to a number of problems. One was that many of the early SIMD instruction sets tended to slow overall performance of the system due to the re-use of existing floating point registers. Other systems, like MMX and 3DNow!, offered support for data types that were not interesting to a wide audience and had expensive context switching instructions to switch between using the FPU and MMX registers. Compilers also often lacked support, requiring programmers to resort to assembly language coding.

SIMD on x86 had a slow start. The introduction of 3DNow! by AMD and SSE by Intel confused matters somewhat, but today the system seems to have settled down (after AMD adopted SSE) and newer compilers should result in more SIMD-enabled software. Intel and AMD now both provide optimized math libraries that use SIMD instructions, and open source alternatives like libSIMD, SIMDx86 and SLEEF have started to appear.

Apple Computer had somewhat more success, even though they entered the SIMD market later than the rest. AltiVec offered a rich system and can be programmed using increasingly sophisticated compilers from Motorola, IBM and GNU, therefore assembly language programming is rarely needed. Additionally, many of the systems that would benefit from SIMD were supplied by Apple itself, for example iTunes and QuickTime. However, in 2006, Apple computers moved to Intel x86 processors. Apple's APIs and development tools (XCode) were rewritten to use SSE2 and SSE3 instead of AltiVec. Apple was the dominant purchaser of PowerPC chips from IBM and Freescale Semiconductor and even though they abandoned the platform, further development of AltiVec is continued in several Power Architecture designs from Freescale and IBM. On WWDC '15, Apple announced SIMD Vectors support for their new language Swift 2.0.

SIMD within a register, or SWAR, is a range of techniques and tricks used for performing SIMD in general-purpose registers on hardware that doesn't provide any direct support for SIMD instructions. This can be used to exploit parallelism in certain algorithms even on hardware that does not support SIMD directly.

Microsoft added SIMD to .NET in RyuJIT.[5] Use of the libraries that implement SIMD on .NET are available in NuGet package Microsoft.Bcl.Simd[6]

SIMD on the web

In 2013 John McCutchan announced [7] that he had created a performant interface to SIMD instruction sets for the Dart programming language, bringing the benefits of SIMD to web programs for the first time. The interface consists of two types:

Instances of these types are immutable and in optimized code are mapped directly to SIMD registers. Operations expressed in Dart typically are compiled into a single instruction with no overhead. This is similar to C and C++ intrinsics. Benchmarks for 4x4 matrix multiplication, 3D vertex transformation, and Mandelbrot set visualization show near 400% speedup compared to scalar code written in Dart.

John's work on Dart has been adopted by ECMAScript and Intel announced at IDF 2013 that they are implementing John's specification for both V8 and SpiderMonkey.

Emscripten, Mozilla’s C/C++-to-JavaScript compiler, with extensions [8] can enable compilation of C++ programs that make use of SIMD intrinsics or gcc style vector code to SIMD API of JavaScript resulting in equivalent speedups compared to scalar code.

Though it has generally proven difficult to find sustainable commercial applications for SIMD-only processors, one that has had some measure of success is the GAPP, which was developed by Lockheed Martin and taken to the commercial sector by their spin-off Teranex. The GAPP's recent incarnations have become a powerful tool in real-time video processing applications like conversion between various video standards and frame rates (NTSC to/from PAL, NTSC to/from HDTV formats, etc.), deinterlacing, image noise reduction, adaptive video compression, and image enhancement.

A more ubiquitous application for SIMD is found in video games: nearly every modern video game console since 1998 has incorporated a SIMD processor somewhere in its architecture. The PlayStation 2 was unusual in that one of its vector-float units could function as an autonomous DSP executing its own instruction stream, or as a coprocessor driven by ordinary CPU instructions. 3D graphics applications tend to lend themselves well to SIMD processing as they rely heavily on operations with 4-dimensional vectors. Microsoft's Direct3D 9.0 now chooses at runtime processor-specific implementations of its own math operations, including the use of SIMD-capable instructions.

One of the recent processors to use vector processing is the Cell Processor developed by IBM in cooperation with Toshiba and Sony. It uses a number of SIMD processors (a NUMA architecture, each with independent local store and controlled by a general purpose CPU) and is geared towards the huge datasets required by 3D and video processing applications.

A recent advancement by Ziilabs was the production of an SIMD type processor which can be used on mobile devices, such as media players and mobile phones.[9]