SMS Hessen[lower-alpha 1] was the third of five pre-dreadnought battleships of the Braunschweig class. She was laid down in 1902, launched the following year, and commissioned into the German Imperial Navy in 1905. She was named after the state of Hesse. Her sister ships were SMS Braunschweig, SMS Elsass, SMS Preussen, and SMS Lothringen. Like all other pre-dreadnoughts built at the turn of the century, Hessen was quickly made obsolete by the launching of HMS Dreadnought in 1906; as a result, she saw only limited service with the German fleet.

During World War I, Hessen saw action in the Battle of Jutland as the second ship of the III Division of the II Battle Squadron. In the last daytime action between capital ships at Jutland, Hessen and the other pre-dreadnoughts of the II Battle Squadron covered the retreat of Rear Admiral Franz von Hipper's battered battlecruisers from Vice Admiral David Beatty's battlecruiser squadron. After the battle, the vessel was disarmed and used as a depot ship.

Hessen was one of the few obsolete battleships Germany was permitted to retain under the terms of the Treaty of Versailles. She served as a coastal defense ship in the 1920s and early 1930s, though she was withdrawn from front-line service in 1934. The following year, the ship was converted into a radio-controlled target. During World War II Hessen served in this capacity, while also working as an icebreaker in the Baltic and North Seas. The ship was ceded to the Soviet Union in 1946 after the end of the war and, renamed Tsel, served until scrapped in 1960. 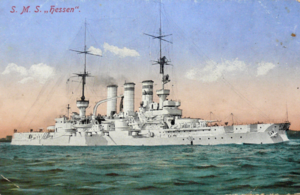 In July 1908, Hessen participated in the annual summer cruise, which went into the Atlantic that year. During the cruise, the ship stopped in Tenerife, along with the battleships Deutschland and Pommern.[4] During fleet exercises on 23 August 1911, Hessen accidentally rammed and sank the Danish steamer Askesund. The crew of the steamer was rescued and there were no reported injuries.[5] In October, the ship was badly damaged when she was rammed by the Danish steamer Argo.[6] In July 1913, Hessen collided with the torpedo boat G110. The torpedo boat suffered significant damage, though it did not sink, and three of its crew were killed.[7]

At the outbreak of World War I in August 1914, the ship was assigned to the IV Battle Squadron along with her four sisters, and served primarily in the Baltic Sea.[3] Hessen performed fleet duties up through the first two years of World War I.[2] Hessen was present as part of the distant support for the battlecruisers that bombarded Scarborough, Hartlepool, and Whitby on 15–16 December 1914.[8] During the operation, the German battle fleet of 12 dreadnoughts and 8 pre-dreadnoughts came to within 10 nmi (19 km; 12 mi) of an isolated squadron of six British battleships. However, skirmishes between the rival destroyer screens convinced the German commander, Admiral Friedrich von Ingenohl, that he was confronted with the entire Grand Fleet, and so he broke off the engagement and turned for home.[9]

Another raid on the English coast followed on 24–25 April; this time, the battlecruisers bombarded Yarmouth and Lowestoft.[10] During this operation, the battlecruiser Seydlitz was damaged by a British mine and had to return to port prematurely. Visibility was poor, so the operation was quickly called off before the British fleet could intervene and inflict further losses.[11] 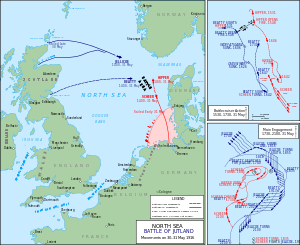 Hessen took part in the Battle of Jutland on 31 May–1 June 1916. Hessen and the five ships of the Deutschland class formed the II Battle Squadron, under the command of Rear Admiral Franz Mauve. During the battle, Hessen and the Deutschland-class ships performed a vital blocking action that covered the withdrawal of the German battlecruisers. Vice Admiral David Beatty's battlecruisers had attacked the German ships in the darkness, and when the German ships had turned westward to evade their attackers, Mauve continued in a southerly course, which placed his ships between the British and German battlecruisers. The British battlecruisers turned their attention to the pre-dreadnoughts, who in turn altered their course to the southwest in order to bring all of their guns to bear on the British ships.[12] In the darkness, only muzzle flashes from the British ships could be seen; as a result Hessen and the other II Squadron ships held their fire.[13][lower-alpha 3]

At approximately 03:00 on 1 June, a group of British destroyers launched a torpedo attack against the German battle line. At 03:07, Hessen narrowly avoided a torpedo, but Pommern, the ship directly ahead of Hessen, was not so lucky. At 03:10, Pommern was struck by at least one torpedo, which is believed to have detonated one of the ship's 6.7 in (17 cm) shell magazines, destroying the ship. Hessen was undamaged.[14] Aboard Hessen, it was assumed that a submarine had destroyed Pommern; at 03:12 Hessen fired her main battery at an imagined submarine.[15] Hessen and several other battleships engaged imaginary submarines again at 05:06, and again at 05:13. Gunfire from Hessen and Hannover during the latter incident nearly hit the light cruisers Stettin and München; Admiral Scheer ordered them to cease fire.[16] At 06:55, Hessen and Schlesien mistook a mine buoy dropped by Kaiser as a periscope and attacked it.[17] In the course of the battle, Hessen had fired five 28 cm rounds,[18] thirty-four 17 cm shells, and twenty-four 8.8 cm rounds.[19]

In 1917, Hessen was withdrawn from active service, disarmed, and used as a depot ship in Brunsbüttel. While in reserve at Brunsbüttel, Hessen was jokingly referred to as SMS "Kleinste Fahrt" (SMS "Dead Slow") because of a warning that had been painted on the ship's hull.[2] The ship's four 28 cm guns were re-mounted as railroad guns and employed on the Western Front.[20] The Australian Army captured one of the guns on 8 August 1918;[21] it's preserved as the Amiens Gun at the Australian War Memorial in Canberra, Australia.[22] 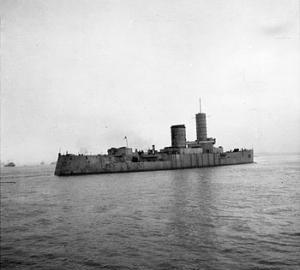 Hessen was one of eight old pre-dreadnoughts, along with the other ships of her class and the Deutschland-class battleships Schleswig-Holstein and Schlesien, that Germany was permitted to retain under the terms of Treaty of Versailles.[23] After being refitted and rearmed, Hessen returned to service with the Reichsmarine in 1925.[2] Of the eight ships, Hessen was one of only three still in service as a warship when the Nazi Party under Adolf Hitler came to power in 1933. The Nazis began a program of naval rearmament; this included the battleship Gneisenau,[24] which was ordered as a replacement for Hessen in 1934.[25]

On 12 November 1934, Hessen was withdrawn from fleet service and placed in reserve. On 31 March 1935, Hessen was stricken from the reserve list and converted into a target ship. Her armament was removed, the hull was lengthened, and new machinery was installed. The longer hull allowed room for two additional watertight compartments, which brought the number up to 15 from the original 13. The ship's superstructure was cut down nearly entirely; Hessen retained only a single funnel, a tower foremast, and the two armored barbettes for the main battery turrets. The ship had a crew of 80, but could be operated by remote control when being used as a target.[2]

Hessen was recommissioned on 1 April 1937 and served in the Kriegsmarine through World War II.[2] On 31 March 1940, Hessen acted as an icebreaker for the auxiliary cruisers Atlantis, Widder, and Orion, on their trip from Kiel to the North Sea.[26] She and her control ship, Blitz, were ceded to the Soviet Union in 1946. She recommissioned on 3 June 1946 as Tsel, and continued to operate as a target ship until scrapped in 1960.[2]