From Infogalactic: the planetary knowledge core
Jump to: navigation, search
For other ships with the same name, see German submarine U-1.

SM U-1, also known in English as the German Type U 1 submarine, was the first U-boat class of the U-boat series of submarines produced for the German Empire's Imperial German Navy. Only one was built. The U-1 was constructed by Germaniawerft in Kiel and was commissioned on 14 December 1906.[4] When World War I began in 1914, the U-1 was deemed obsolete and was used only for training until 19 February 1919, when it was struck by another vessel while on an exercise.

The U-Boat was a redesigned Karp class submarine by Spanish engineer Raimondo Lorenzo d'Equevilley Montjustin working for the German armaments company Krupp. The main improvements over the export Karp class included trim tanks instead of a moveable weight, a redesigned forecastle to improve seagoing ability, a 10 cm (3.9 in) larger diameter and strengthened pressure hull which prevented oil leakage from the external tanks, a rearrangement of the internal equipment and a heavier ballast keel.

The Imperial German Navy avoided the use of gasoline due to the perceived risk of fires and explosions that had caused many accidents in early submarines, and instead of the gasoline engines that had powered the Karp boats, U-1 was given much safer Körting kerosene engines. While normally kerosene engines were started using gasoline, the U-1's engines avoided even this and instead used electrically-heated air. 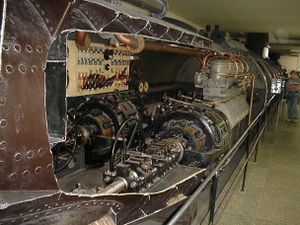 The Körting engines could not be reversed and also had to run at full speed, since their rpm could not be varied to any useful extent, and as a consequence U-1 was fitted with adjustable-pitch propellers to allow her speed to be controlled. These propellers were abandoned in later designs due to their poor efficiency, kerosene-electric propulsion being used instead before diesel propulsion was finally installed in the U-19 class in 1912-1913.

Construction on U-1 began in the autumn of 1904. The boat began its trials in August 1906, a year later than originally planned.

After suffering damage from a collision while on a training exercise in 1919, U-1 was sold to the Germaniawerft foundation at the Deutsches Museum in Munich where it was restored and can be viewed on display. A large portion of the starboard hull has been removed to allow visitors to see the submarine's interior.