The SOFAR channel (short for Sound Fixing and Ranging channel), or deep sound channel (DSC),[1] is a horizontal layer of water in the ocean at which depth the speed of sound is at its minimum. The SOFAR channel acts as a waveguide for sound, and low frequency sound waves within the channel may travel thousands of miles before dissipating.[2] This phenomenon is an important factor in submarine warfare. The deep sound channel was discovered and described independently by Dr. Maurice Ewing and Leonid Brekhovskikh in the 1940s.[3] 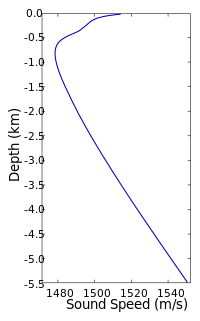 Sound speed as a function of depth at a position north of Hawaii in the Pacific Ocean derived from the 2005 World Ocean Atlas. The SOFAR channel axis is at ca. 750-m depth.

The SOFAR channel is centred on the depth where the cumulative effect of temperature and water pressure (and, to a smaller extent, salinity) combine to create the region of minimum sound speed in the water column. Pressure in the ocean increases linearly with depth, but temperature is more variable, generally falling rapidly in the main thermocline from the surface to around a thousand metres deep, then remaining almost unchanged from there to the ocean floor in the deep sea. Near the surface, the rapidly falling temperature causes a decrease in sound speed, or a negative sound speed gradient. With increasing depth, the increasing pressure causes an increase in sound speed, or a positive sound speed gradient. The depth where the sound speed is at a minimum is called the sound channel axis.

Near Bermuda, the sound channel axis occurs at a depth of around 1000 metres. In temperate waters, the axis is shallower, and at high latitudes (above about 60°N or below 60°S) it reaches the surface.

Sound propagates in the channel by refraction of sound, which makes sound travel near the depth of slowest speed. If a sound wave propagates away from this horizontal channel, the part of the wave furthest from the channel axis travels faster, so the wave turns back toward the channel axis. As a result, the sound waves trace a path that oscillates across the SOFAR channel axis. This principle is similar to long distance transmission of light in an optical fibre.

Mysterious low-frequency sounds, attributed to fin whales (Balaenoptera physalus), are a common occurrence in the channel. Scientists believe fin whales may dive down to this channel and "sing" to communicate with other fin whales many kilometers away.[4]

During World War II, Dr. Maurice Ewing suggested that dropping into the ocean a small metal sphere (called a SOFAR bomb or SOFAR disc), specifically designed to implode at the SOFAR channel, could be used as a secret distress signal by downed pilots.[5]

The novel The Hunt for Red October describes the use of the SOFAR channel in submarine detection.

The conjectured existence of a similar channel in the upper atmosphere, theorized by Dr. Ewing, led to Project Mogul, carried out from 1947 until late 1948.

Acoustic pulses travel great distances in the ocean because they are trapped in an acoustic "wave guide". This means that as acoustic pulses approach the surface they are turned back towards the bottom, and as they approach the ocean bottom they are turned back towards the surface. The ocean conducts sound very efficiently, particularly sound at low frequencies, i.e., less than a few hundred Hz.

Terminology related to The SOFAR or deep sound channel from the United States' Navy Supplement to the DOD Dictionary of Military and Associated Terms:[1]