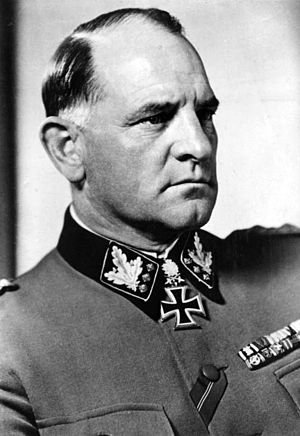 Josef "Sepp" Dietrich, SS-Oberst-Gruppenführer and Generaloberst of the Waffen-SS

The rank was first proposed in early 1942 as a possible future rank for Waffen-SS commanders who might be promoted to command Army Groups. The Heer leadership immediately opposed the creation of an SS-Colonel General rank, since Army commanders felt that no SS general should hold such a large amount of authority and that SS combat commands should be restricted to the Corps and Division level. The idea of SS Armies and Army Groups was something few wished to see develop – two SS Armies would eventually be established, (the 6th and the 11th SS Armies). No SS Army Groups were ever created.

In April 1942, on Adolf Hitler's personal authority, the rank of SS-Oberst-Gruppenführer was at last bestowed but only within the Allgemeine-SS. The very first appointment was to Nazi Party treasurer and RZM chief Franz Xaver Schwarz. On the same day orders were issued for a dual promotion within the Ordnungspolizei, making Kurt Daluege a Generaloberst der Polizei at the same time. Daluege's rank was the only police promotion to this rank.

The last two of the four Oberst-Gruppenführer promotions were made in 1944, this time to Waffen-SS generals.[5] Dietrich's date of rank was back-dated to 1942, making him the most senior officer of the Waffen-SS. The final seniority list was as follows:

Franz Xaver Schwarz, who held Ehrenführer (honorary) rank, was the only holder of the rank who was not granted equivalent police or Waffen-SS rank. The Oberst-Gruppenführer rank was worn on the field-grey Waffen-SS tunic, the grey SS service tunic, or in Daluege's case the German police uniform. There are no photographic records of the insignia ever being worn on the black ceremonial uniform, which had largely fallen into disuse by the time the rank was created.

In 1944, Himmler offered to appoint Albert Speer to the honorary rank of Oberst-Gruppenführer. Speer declined, not wishing to formally be subordinate to Himmler.[8] Himmler's successor, Karl Hanke, never held the rank of Oberst-Gruppenführer, but was appointed Reichsführer-SS from the lower grade of Obergruppenführer. Karl Wolff claimed to have been promoted to the rank in April 1945 by personal decree of Adolf Hitler; Wolff's claim is not supported by either documentary or photographic evidence, leading most history texts to list his final rank as Obergruppenführer.

The rank Oberst-Gruppenführer has also appeared in fiction, and was depicted in Robert Harris's novel Fatherland, set in the 1960s in a parallel history where Germany had won the Second World War. In the novel, Arthur Nebe makes an appearance as an SS-Oberst-Gruppenführer while serving as commander of the Kriminalpolizei. The insignia for Oberst-Gruppenführer is also worn by Ian McKellen as the dictator-king Richard III in the film adaptation of the play, set in 1930s Great Britain. Reinhard Heydrich is shown to hold the rank in the alternate history television series The Man in the High Castle.