The SS-Verfügungstruppe (SS-VT) (English: SS Dispositional Troops) was formed in 1934 as combat troops for the NSDAP. They were involved in the German invasion of Poland in 1939, where they took part in fighting and murdered civilians and prisoners of war. By 1940 these military SS units had become the nucleus of the Waffen-SS.

On 17 August 1938 Adolf Hitler decreed that the SS-VT was neither a part of the police nor the German Wehrmacht, but military-trained men at the disposal of the Führer in war or peace. The men were to be trained in accordance with the rules of the SS and manned by volunteers who had completed their service in the Reichsarbeitsdienst (RAD; Reich Labour Service).[1] 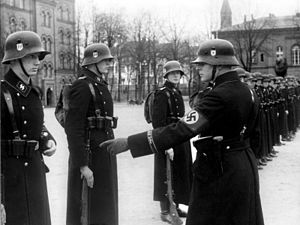 The SS-VT was formed on 24 September 1934 from a merger of various Nazi and paramilitary formations such as the SS Special Detachments (SS-Sonderkommandos) and the Headquarters Guard (SS-Stabswache) units. The SS-VT was to be made up of three regiments modeled on the infantry regiments of the German Army (Heer) and according to their regulations. Each regiment would contain three battalions, a motorcycle company and mortar company. The unit was officially designated SS-Verfügungstruppe ("Dispositional troops", i.e. troops at the personal disposal of the Führer).[2] The formation was to be placed at the "disposal" of the army in time of war. The existence of the SS-Verfügungstruppe (SS-VT) was publicly declared on 16 March 1935 by Hitler in a speech at the Reichstag.[3]

The SS-VT trained alongside Hitler's personal body guard the Leibstandarte SS Adolf Hitler (LSSAH).[4] The LSSAH continued to serve exclusively as a personal protection unit and honor guard during this timeframe.

By 1937 the SS was divided into three branches: the Allgemeine-SS (General SS), the SS-Verfügungstruppe, and the SS-Totenkopfverbände (SS-TV) which administered the concentration camps.[5]

The military formations under Himmler's command on 1 September 1939 consisted of several subgroups: 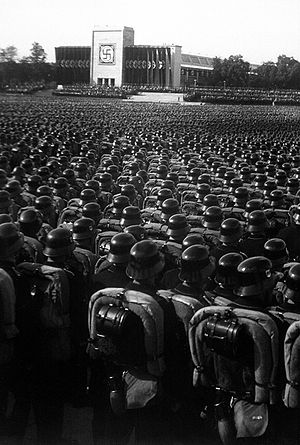 Elements of the SS-VT served with the Wehrmacht during the occupation of the Sudetenland, Austria, and Czechoslovakia. For those operations, the SS-VT was under the command of the army. The SS-VT also formed an Artillery Regiment during this timeframe which was used to fill the gaps in a number of army units for those events.[8] The SS-VT regiments Deutschland and Germania along with the Leibstandarte participated in the invasion of Poland, with Der Führer (recruited in Austria after the Anschluss) in reserve at Prague.[9] In September 1939, a combined unit of SS-VT and Heer (army) troops conducted operations as Panzer Division Kempf during the invasion of Poland. It fought alongside army units at Rozan, Modlin, Łomża and Kmiczyn. The division was disbanded near the Polish city of Nidzica on 7 October 1939.

Events during the invasion of Poland raised doubts over the combat effectiveness of the SS-VT. Their willingness to fight was never in any doubt; at times they were almost too eager to fight. The OKW or Oberkommando der Wehrmacht (High Command of the Armed Forces) reported that the SS-VT had unnecessarily exposed themselves to risks and acted recklessly, incurring heavier losses than army troops. They also stated that the SS-VT was poorly trained and its officers unsuitable for command. In its defence the SS-VT insisted that it had been hampered by fighting piecemeal instead of as one formation, and being improperly equipped to carry out what had been required of it. Heinrich Himmler insisted that the SS-VT should be allowed to fight in its own formations, under its own commanders, while the OKW tried to have the SS-VT disbanded altogether. Hitler chose a compromise path. He ordered that the SS-VT form its own divisions but the divisions would be under army command.[10]

Development of the Waffen-SS

In the wake of the Polish Invasion, there were four SS combat regiments: Leibstandarte, Deutschland, Germania and Der Führer. The latter three were reorganized into the SS-Verfügungs-Division,[11] and the Leibstandarte was expanded into a motorized brigade. In addition there were the armed but ill-trained Totenkopfstandarten; three of these together with SS Heimwehr Danzig were organized into the Totenkopf-Division under Eicke's command in October 1939. A further division, the Polizei-Division, was created from the Ordnungspolizei. These formations took part in combat training while under army commands in preperation for Operation Fall Gelb against the Low Countries and France in 1940.[12]

In that operation, the SS-VT troops saw action in the main drive for the Dutch central front around Rotterdam.[13] After the city had been captured, the Division, along with other divisions, intercepted a French force and forced them back to the area of Zeeland and Antwerp. They were next used to mop-up small pockets of resistance in the areas already captured by the German advance. 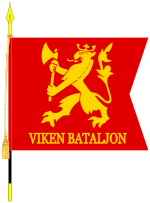 The SS-VT was officially renamed the "Waffen-SS" in a speech made by Adolf Hitler on 19 July 1940.[14] Then on 1 August, Himmler established the Kommandoamt der Waffen-SS (Waffen-SS Command Office) within the new SS-Führungshauptamt (FHA) under Gruppenführer Hans Jüttner. The Totenkopf Division and other SS-TV combat units were transferred to FHA control. Further that same month, SS chief-of-staff Gottlob Berger approached Himmler with a plan to recruit volunteers in the conquered territories from the ethnic German and Germanic populations. At first Hitler had doubts about recruiting foreigners, but he was persuaded by Himmler and Berger. He gave approval for a new division to be formed from foreign nationals with German officers.[15]

In December 1940 the Germania Regiment would be removed from the Verfügungs-Division and used to form the cadre of a new division, SS-Division Germania,[16] It was made up of mostly "Nordic" volunteers from the newly conquered territories, Danes, Norwegians, Dutch and Flemings.[17] At the start of 1941 the Verfügungs-Division would be redubbed Reich (in 1942 Das Reich), the Germania was renamed Wiking and the Polizei division brought under Waffen-SS administration.[18] The Leibstandarte would be expanded to a division for Operation Barbarossa.

When the Waffen-SS divisions were assigned numbers much later in the war these first formations, Leibstandarte, Das Reich, Totenkopf, Polizei and Wiking would be recognized as SS divisions 1 through 5.