From Infogalactic: the planetary knowledge core
(Redirected from SS-Wirtschafts-Verwaltungshauptamt)
Jump to: navigation, search

The SS Main Economic and Administrative Office (SS-Wirtschafts- und Verwaltungshauptamt), abbreviated SS-WVHA, was a Nazi organization responsible for managing the finances, supply systems and business projects for the Allgemeine-SS. It also ran the concentration camps and was instrumental in the implementation of the Final Solution through such subsidiary offices as the Concentration Camps Inspectorate and SS camp guards.

Economics of The Holocaust

SS-Obergruppenführer Oswald Pohl worked with Walther Funk, Reich Minister of Economics (German: Reichswirtschaftsminister), to oversee financial aspects of the Final Solution, the most deadly phase of The Holocaust. Valuables such as gold watches, rings, even tooth fillings, glasses, and currency were taken from the inmates on arrival at the death camps. These items were then sent back to Berlin in WVHA-marked crates for processing at the Reichsbank, under its director Emil Puhl.[1] Between August 1942 and January 1945, a total of 76 WVHA transports arrived in Berlin.

In 1947, a detailed description showing the scale of the operation was given at the WVHA trials at Nuremberg. Evidence outlined how property and cash worth hundreds of millions of Reichsmarks was taken from the victims of Aktion Reinhard. It was collected from the detailed notes that had passed between SS and Police Leader Odilo Globocnik and Reichsführer-SS Heinrich Himmler during the operation to kill most of the Jews in the General Government.[1]

The WVHA was expanded in February 1942 under the command of SS-Obergruppenführer Oswald Pohl, and had five main departments (German: Ämter or Amtsgruppe):

The WVHA was also put in charge of numerous commercial ventures that the SS has been increasingly engaged in since the mid-1930s. 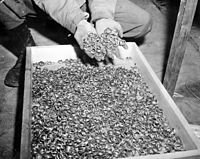 US troops, while liberating Buchenwald concentration camp in 1945, found thousands of wedding rings that had been taken from victims during The Holocaust.

In 1942, the WVHA's main remit was to expand the SS's contribution to the war effort by using forced labor in armaments manufacture and construction projects. From these requirements grew the Amt W (Economics), the largest and most valuable division in WVHA. Using a limitless supply of slave labor provided by the concentration camps, the Amt W was in a position to produce and deliver large quantities of products cheaply and quickly to the German market. Initially working prisoners in Arbeitslager (English: Work Camp) were given better conditions than usual. But by late 1942, the Amt W demanded higher work rates without increasing food rations or providing better living conditions. As a result, SS guards used murderous brutality to achieve higher quotas from forced labor in Strafkompanies.

Amt W controlled the entire product cycle—from extraction of raw materials to manufacture and distribution—either directly or through a complex network of shell companies set up by Pohl as privately owned businesses. After the invasion of the Soviet Union, the SS also gained operational control of the majority of the Soviet manufacturing and mining assets on occupied territories.

The concentration camps gave the WVHA an unlimited labor resource. Amt W negotiated contracts with industrial firms regarding the use of slave labor in their factories. Arrangements covered the number of prisoners needed, the type of work they did, the number of SS guards to be assigned to the detail, food and lodging for the prisoners as well as the amount of money the firms would pay the SS for each prisoner per day.

Slave labor for private companies, included Heinkel, IG Farben, Junkers, Krupp, Messerschmitt, Salzgitter, and Siemens-Schuckertwerke. At locations like Mauthausen and Gusen at St. Georgen, Pohl managed successfully to make leading armament producers like Messerschmitt GmbH or Steyr-Daimler-Puch fully dependable on deliveries by companies of Amtsgruppe W. Additionally, the SS was producing under contract military clothing and equipment for the Wehrmacht.

By 1945, the SS-WVHA controlled over 500 businesses throughout Germany, with some products dominating entire markets such as Apollinaris mineral water, Allach porcelain or DEST (building material and armament). 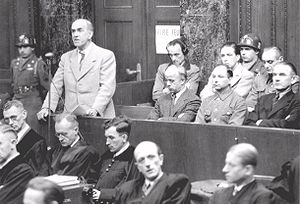 Oswald Pohl, former Chief of the SS Main Economic and Administrative Dept, standing, is indicted on war crimes charges in connection with the operation of concentration camps at the Nuremberg Trials in 1947. After making numerous appeals, he was executed in Landsberg Prison on June 7, 1951.

Some commercial ventures and assets owned or operated by the SS through its SS-WVHA units: