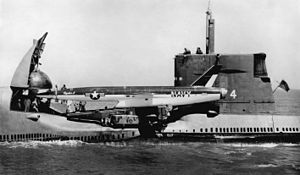 From 2002 to 2008, the U.S. Navy modified the four oldest Ohio-class submarines: USS Ohio, Michigan, Florida, and Georgia into SSGNs. The conversion was achieved by installing vertical launching systems (VLS) in a multiple all-up-round canister (MAC) configuration in 22 of the 24 missile tubes, replacing one Trident missile with 7 smaller Tomahawk cruise missiles. The 2 remaining tubes were converted to lockout chambers for use by special forces personnel. This gave each converted submarine the capability to carry up to 154 Tomahawks. The large diameter tubes can also be modified to carry and launch other payloads, such as UAVs or UUVs although these capabilities have not yet been fully implemented. In addition to generating a significant increase in stand-off strike capabilities, this conversion also counts as an arms reduction against the START II treaty[1][2] because it reduces the number of nuclear weapons that are forward-deployed. USS Florida launched cruise missiles against Libyan targets as part of Operation Odyssey Dawn in March 2011. 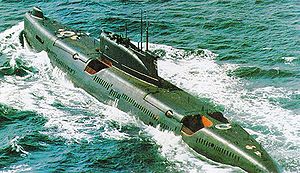 The Russian/Soviet Navy has operated the following classes of cruise missile submarine (these are NATO reporting names):

The Whiskey variants and Echo I cruise missile submarines deployed with a nuclear land attack version of the P-5 Pyatyorka (SS-N-3 Shaddock) from the late 1950s to 1964, concurrently with the US Regulus force, until the strategic land attack mission was transferred entirely to the SSBN force. Along with the Julietts and Echo IIs, these continued as SSGs or SSGNs with an antiship variant of the P-5 until circa 1990. The Echo Is were an exception; they could not accommodate the antiship targeting radar and served as SSNs after the land attack missiles were withdrawn.[3]

The Collins class submarines of the Royal Australian Navy, which can launch Sub-Harpoon anti-ship missiles, use the SSG designation.

The Israeli Dolphin class submarine fleet is alleged to carry both nuclear armed Popeye Turbo SLCMs with a range of at least 1,500 km (930 mi) and Sub-Harpoon missiles.[4][5]

The Kilo-class submarine used by several navies around the world including the Indian Navy, Russian Navy and the People's Liberation Army Navy is equipped to carry the Klub-S Cruise Missile with a strike range of 300 km.

The Royal Navy deploys Tomahawk missiles for land-attack on all its present fleet submarines (the Trafalgar and Astute classes), although these are multi-roled boats rather than having land attack as a primary role. Formerly, some submarines (e.g., of the Swiftsure class) also carried Sub-Harpoon anti-ship missiles.