The SU-85 (Samokhodnaya ustanovka 85) was a Soviet casemate-style self-propelled gun used during World War II, based on the chassis of the T-34 medium tank. Earlier Soviet self-propelled guns were meant to serve as either assault guns, such as the SU-122, or as tank destroyers; the SU-85 fell into the latter category. The designation "85" signifies the bore of the vehicle's armament, the 85 mm D-5S gun.

Early in World War II, Soviet tanks such as the T-34 and KV-1 had adequate firepower to defeat any of the German tanks then available. By the fall of 1942, Soviet forces began to encounter the new German Tiger tank, with armor too thick to be penetrated by the 76.2 mm guns used in the T-34 and KV tanks at a safe range.[1] The Soviet command also had reports of the Panther tank, a new, heavily armoured German tank then under development. Although the Panther was not seen in combat until July 1943, the new generation of German vehicles meant the Red Army would need a new, more powerful main gun for their armoured formations.

In May 1943, work was begun on a new anti-tank gun. Military planners directed the design bureaus of both Gen. Vasiliy Grabin and Gen. Fyodor Petrov to modify the 85mm anti-aircraft gun for use as an anti-tank weapon. Petrov's bureau developed the D-5 85mm gun. Though much too large for the T-34 or KV-1 turret, it was thought the gun could be mounted upon the chassis of the SU-122 self-propelled gun to give the weapon mobility. The version of this gun intended to be mounted upon the SU-85 was called the D-5S, with the "S" standing for self-propelled. Initially the production factory at Uralmash rejected the proposed design. Nevertheless, the administrators at Uralmash were persuaded to proceed, and the new design was put into production. The weapon was later modified to include a telescopic sight and a new ball gun mantlet. This vehicle was retitled the SU-85-II.[1]

The SU-85 was a modification of the earlier SU-122 self-propelled howitzer, essentially replacing the 122 mm M-30S howitzer of the SU-122 with a D-5T high-velocity 85 mm antitank gun. The D-5T was capable of penetrating the Tiger I from 1000 m.[2] The vehicle had a low profile and excellent mobility. Initially given an armored commander's cap on the first batch, the SU-85's observational optics were improved by the introduction of a standard commander's cupola - the same as on the T-34-76 model 1942. In addition to the already existing prismatic observation sights installed in left side and rear. On later vehicles, the same optics were added, almost allowing all-around observation.[3]

SU-85 production started in mid-1943, with the first vehicles reaching their units by August. When the up-gunned T-34-85 medium tank entered mass production in the spring of 1944, there was no point in continuing production of a tank destroyer without superior firepower,[4] so SU-85 production was stopped in late 1944 after 2,050 vehicles had been produced. It was replaced on the production lines by the SU-100 tank destroyer, armed with the more powerful 100 mm D-10S gun.

There were two versions: the basic SU-85 had a fixed commander's cupola with a rotating periscope and three vision blocks; the improved SU-85M had the same casemate as the later SU-100, with a commander's cupola as used on the T-34-85. 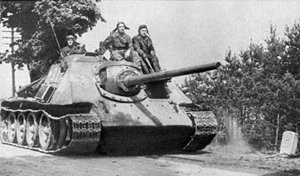 SU-85 tank destroyer of the Polish 13th Self-Propelled Artillery Regiment. This vehicle is missing the first road wheel on the right, and its track fenders.

The SU-85 entered combat in August 1943. It saw active service across the Eastern Front until the end of the war. Though a capable weapon, it was found that its 85 mm weapon was not adequate to penetrate the armour of the larger German armoured fighting vehicles. It was replaced by the SU-100.

The SU-85 was withdrawn from Soviet service soon after the war, and was exported to many Soviet client states in Europe and elsewhere. Some SU-85s were converted to use as command and recovery vehicles.[5] In places such as North Korea and Vietnam, it remained in service for many years.[6]