Al-Sabah was born on 16 June 1929. He received primary education at Al Mubarakya School during the 1930s and then completed his education under tutors. He is the half-brother of the previous Emir of Kuwait, Sheikh Jaber Al-Ahmad Al-Sabah, who appointed Sabah as Prime Minister in July 2003, replacing the then Crown Prince of Kuwait, Sheikh Saad Al-Abdullah Al-Salem Al-Sabah. He had previously been Foreign Minister for 40 years, from 1963 to 2003, making him one of the longest-serving foreign ministers in the world.

He was also first Deputy Prime Ministers of Kuwait while serving as Foreign Minister.[2] 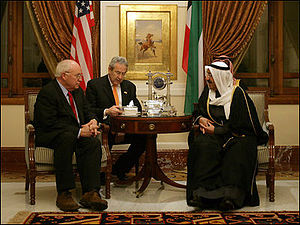 U.S. Vice President Dick Cheney meets with Prime Minister Sheikh Sabah to deliver condolences on the death of the Emir in 2006.

On 15 January 2006 the emir, Sheikh Jaber, died, making Sheikh Saad, Crown Prince of Kuwait, the new emir. With the accession of Sheikh Saad, Sabah was likely to become the new Crown Prince, retaining his function of Prime Minister. However, the Constitution requires that the Emir be sworn in before Parliament, and the oath of office is complex; soon the word began to spread that Sheikh Saad was unable to take the oath in full. Some reports suggested that he suffered from Alzheimer's disease or some other debilitating disease; it was generally agreed that he was unable to speak, at least at any length.[3] After a power struggle within the ruling family, Sheikh Saad agreed to abdicate as the Emir of Kuwait on 23 January 2006 due to his illness. The ruling family then chose Sheikh Sabah as the new Emir of Kuwait. On 24 January 2006, Kuwait’s parliament voted Emir Saad out of office, moments before an official letter of abdication was received.[4] The Kuwaiti Cabinet nominated Al-Sabah to take over as emir. He swore in on 29 January 2006 with the National Assembly's approval, ending that crisis.

Al-Sabah dissolved the National Assembly of Kuwait on 19 March 2008 and called for early elections on 17 May 2008, after the cabinet resigned in the week of 17 March 2008 following a power struggle with the government.[5]

A struggle broke out between the government and parliament in 2012; he consequently dissolved the parliament.[6][7]

Significant laws passed during his reign

Al-Sabah's wife, Sheikha Fatuwah bint Salman Al-Sabah, died before 2 August 1990. She was a first cousin of his father, Ahmad Al-Jaber Al-Sabah. He has two sons, Sheikh Nasser (Minister of the Ruler's Court "Diwan Amiri"), and Sheikh Hamed. Sheikh Sabah also had two other children who died. His daughter, Sheikha Salwa, died from breast cancer on 23 June 2002 in London.[10] The Emir named his palace "Dar Salwa" (the House of Salwa) after her. His fourth son, Sheikh Ahmed, died in a car accident in 1969.

The Emir enjoys fishing and travels to Oman frequently (Salalah in the Dhofar Governorate to be exact)[17] where he owns a small island[citation needed] and goes fishing for leisure. He shies away from areas where there is a lot of glamour preferring instead areas where he can keep a low profile. Al-Sabah also frequented Somalia to hunt, and after the political turmoil, he still continues.[17]