SHU is the second largest Catholic university in New England, behind Boston College,[4] and offers more than 40 degree programs to over 7,500 students at the bachelor's, master's and doctoral levels.

Sacred Heart University was founded in 1963 by the Most Reverend Walter W. Curtis, Bishop of the Diocese of Bridgeport. It was established to provide the community with an affordable, quality education at a local Catholic university. The University was to be led and staffed by the laity independent and locally oriented, serving the needs of the diocese and of southwestern Connecticut. Former American ambassador and Diplomat Thomas Patrick Melady served as President of the University from 1976 to 1986.

Enrollment has risen from the original class of 173 to over 6,000 full and part-time undergraduate and graduate students, and the faculty has increased from 9 to 237 full-time professors and over 350 adjunct professors since 1963. 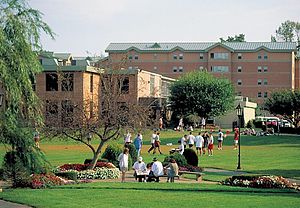 The University has enhanced the undergraduate student experience in several notable ways. The first dorms, Scholars Commons (previously known as J-Hill), were built 1991, giving the university the ability to accept students who wanted the residential experience. It now has 10 residential buildings with 70% of the full-time undergraduates residing in university housing.

New degree programs and majors in relevant disciplines are regularly added to the curriculum. The University offers Division I athletics with 31 varsity teams. The $17.5 million William H. Pitt Health and Recreation Center is available to all students and to the community at large. The University campus is a wireless environment.

In 2012 the University approved construction of two new buildings for the John F. Welch College of Business and the Isabelle Farrington School of Education. The two new buildings will be designed by the Watertown, MA firm of Sasaki & Associates (Who also designed The Chapel of the Holy Spirit and the Linda E. McMahon Student Commons). Construction and development is expected to begin in 2012 on a recently acquired parcel of land at the corner of Jefferson St and Park Ave in Fairfield.[10]

In 2013, Sacred Heart University opened their new Wellness Center. The two-story, colonial-style, 5,800-square-foot building, situated on Park Avenue across from the main campus, serves as a place for acute health and medical needs and will also offer students counseling and therapeutic services.

In the summer of 2014, Sacred Heart University broke ground for a planned new learning center, to be called the “Student Success Center” dedicated to helping SHU students and young students from the surrounding region achieve success in their educational pursuits.

In the summer of 2015, Sacred Heart University broke ground on a new Health Sciences building. This new building will feature state of the art features in order to lead students to future success in their professional career.

The Theatre Arts Program began in 2009 with the premiere of Sacred Heart University's first musical production: Rent. Other productions include Little Shop of Horrors in spring 2011, Spring Awakening in the spring of 2012, Nunsense in spring 2013, The 25th Annual Putnam County Spelling Bee also in spring 2013, Boeing Boeing, Edges, and The Playboy of the Western World in the fall of 2013, Chicago and You're a Good Man Charlie Brown in spring 2014, Almost Maine, Dogfight, and I Remember Mama in fall 2014, and Wait Until Dark, The Fantasticks, and Sweeney Todd: The Demon Barber of Fleet Street in spring 2015. The Theatre Arts Program also features a student-produced, student-written, and student-performed festival called "Theatrefest", spanning through both the fall and spring semesters and is the home of Sacred Heart's own improv team: The Awkward Handshakes. It is one of the largest student groups on campus.

The Spectrum is a student-run newspaper printed and distributed to students each Wednesday and made available online.[12]

More than 1,200 students and members of the faculty and staff volunteer in excess of 31,000 hours each year largely within the City of Bridgeport, but also regionally, nationally, and internationally. In Spring 2008, SHU finished third in the nation in the "ONE Campus Challenge", a campaign that seeks to raise public awareness about the issues of global poverty, hunger, and disease. In Fall 2007, SHU's Habitat for Humanity Campus Chapter was named one of the Top Five Campus Chapters in the nation, for their work in the Bridgeport community, and around the country with alternative spring break service trips.

SHU also allows students to participate in CCIS programs, programs affiliated with other schools across the U.S. These programs include, but are not limited to: France, Argentina, Germany, Belgium, and Japan.

In March 2009, the Women's Basketball team won the NEC Title and earned their second trip to the NCAA Tournament in the last four years. The team faced the Ohio State Buckeyes in the first round of the tournament on March 21, 2009, and lost, 77–63. The Sacred Heart Pioneers women's ice hockey program competes as an independent in NCAA Division I women's ice hockey.

The SHU Baseball Team has appeared in the NEC Championship game the past 4 seasons (2009–2012) and won the past 2 Northeast Conference Titles. These wins have earned SHU back to back NCAA tournament bids.

The SHU Men's Fencing Team won the Northeast Fencing Conference Championship title five years in a row (2010–2014) and was ranked #9 in 2011.

Currently there are twenty-four club sports active on campus. The active clubs are:

Sacred Heart is home to 6 national sororities and 4 national fraternities, as well as 1 local sorority and 1 local fraternity. Greek Life it is one of the largest and fastest growing organizations on campus with nearly 800 members and continues to grow each year. Greek Life at SHU is also home to a chapter of Order of Omega, a national Greek academic honor society.

Notable members of the Board of Trustees