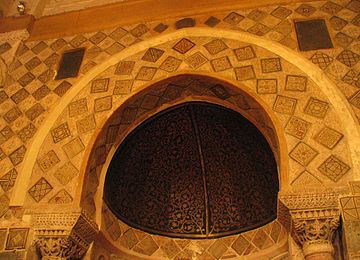 A specimen of Islamic sacred art: in the Great Mosque of Kairouan also called the Mosque of Uqba (in Tunisia), the upper part of the mihrab (prayer niche) is decorated with 9th century lusterware tiles and painted intertwined vegetal motifs.

Religious art or sacred art is artistic imagery using religious inspiration and motifs and is often intended to uplift the mind to the spiritual. Sacred art involves the ritual and cultic practices and practical and operative aspects of the path of the spiritual realization within the artist's religious tradition.

Christian sacred art is produced in an attempt to illustrate, supplement and portray in tangible form the principles of Christianity, though other definitions are possible. Most Christian groups use or have used art to some extent, although some have had strong objections to some forms of religious image, and there have been major periods of iconoclasm within Christianity. Most Christian art is allusive, or built around themes familiar to the intended observer. One of the most common Christian themes is that of the Virgin Mary holding the infant Jesus. Another is that of Christ on the Cross. For the benefit of the illiterate, an elaborate iconographic system developed to conclusively identify scenes. For example, Saint Agnes depicted with a lamb, Saint Peter with keys, Saint Patrick with a shamrock. Each saint holds or is associated with attributes and symbols in sacred art. 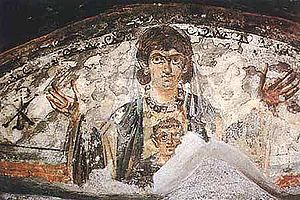 Early Christian art survives from dates near the origins of Christianity. The oldest surviving Christian paintings are from the site at Megiddo, dated to around the year 70, and the oldest Christian sculptures are from sarcophagi, dating to the beginning of the 2nd century. Until the adoption of Christianity by Constantine Christian art derived its style and much of its iconography from popular Roman art, but from this point grand Christian buildings built under imperial patronage brought a need for Christian versions of Roman elite and official art, of which mosaics in churches in Rome are the most prominent surviving examples.

During the development of Christian art in the Byzantine empire (see Byzantine art), a more abstract aesthetic replaced the naturalism previously established in Hellenistic art. This new style was hieratic, meaning its primary purpose was to convey religious meaning rather than accurately render objects and people. Realistic perspective, proportions, light and color were ignored in favor of geometric simplification of forms, reverse perspective and standardized conventions to portray individuals and events. The controversy over the use of graven images, the interpretation of the Second Commandment, and the crisis of Byzantine Iconoclasm led to a standardization of religious imagery within the Eastern Orthodoxy.

An example of a Madonna, commissioned by the Catholic Church during the Renaissance.

The Renaissance saw an increase in monumental secular works, but until the Protestant Reformation Christian art continued to be produced in great quantities, both for churches and clergy and for the laity. During this time, Michelangelo Buonarroti painted the Sistine Chapel and carved the famous Pietà, Gianlorenzo Bernini created the massive columns in St. Peter's Basilica, and Leonardo da Vinci painted the Last Supper. The Reformation had a huge effect on Christian art, rapidly bringing the production of public Christian art to a virtual halt in Protestant countries, and causing the destruction of most of the art that already existed.

As a secular, non-sectarian, universal notion of art arose in 19th century Western Europe, secular artists occasionally treated Christian themes (Bouguereau, Manet). Only rarely was a Christian artist included in the historical canon (such as Rouault or Stanley Spencer). However many modern artists such as Eric Gill, Marc Chagall, Henri Matisse, Jacob Epstein, Elizabeth Frink and Graham Sutherland have produced well-known works of art for churches.[1] Through a social interpretation of Christianity, Fritz von Uhde also revived the interest in sacred art, though the depiction of Jesus in ordinary places in life.

Since the advent of printing, the sale of reproductions of pious works has been a major element of popular Christian culture. In the nineteenth century, this included genre painters such as Mihály Munkácsy. The invention of color lithography led to broad circulation of holy cards. In the modern era, companies specializing in modern commercial Christian artists such as Thomas Blackshear and Thomas Kinkade, although widely regarded in the fine art world as kitsch,[2] have been very successful.

The last part of the 20th and the first part of the 21st century have seen a focused effort by artists who claim faith in Christ to re-establish art with themes that revolve around faith, Christ, God, the Church, the Bible and other classic Christian themes as worthy of respect by the secular art world. Artists such as Makoto Fujimura have had significant influence both in sacred and secular arts. Other notable artists include Larry D. Alexander, Gary P. Bergel, Carlos Cazares, Bruce Herman, Deborah Sokolove, and John August Swanson.[3]

Buddhist art originated on the Indian subcontinent following the historical life of Siddhartha Gautama, 6th to 5th century BC, and thereafter evolved by contact with other cultures as it spread throughout Asia and the world.

Buddhist art followed believers as the dharma spread, adapted, and evolved in each new host country. It developed to the north through Central Asia and into Eastern Asia to form the Northern branch of Buddhist art, and to the east as far as Southeast Asia to form the Southern branch of Buddhist art. In India, Buddhist art flourished and even influenced the development of Hindu art, until Buddhism nearly disappeared in India around the 10th century due in part to the vigorous expansion of Islam alongside Hinduism.

Most Tibetan Buddhist artforms are related to the practice of Vajrayana or Buddhist tantra. Tibetan art includes thangkas and mandalas, often including depictions of Buddhas and bodhisattvas. Creation of Buddhist art is usually done as a meditation as well as creating an object as aid to meditation. An example of this is the creation of a sand mandala by monks; before and after the construction prayers are recited, and the form of the mandala represents the pure surroundings (palace) of a Buddha on which is meditated to train the mind. The work is rarely, if ever, signed by the artist. Other Tibetan Buddhist art includes metal ritual objects, such as the vajra and the phurba.

Two places suggest more vividly than any others the vitality of Buddhist cave painting from about the 5th century AD. One is Ajanta, a site in India long forgotten until discovered in 1817. The other is Dunhuang, one of the great oasis staging posts on the Silk Road...The paintings range from calm devotional images of the Buddha to lively and crowded scenes, often featuring the seductively full-breasted and narrow-waisted women more familiar in Indian sculpture than in painting.[4] Major art included mosques and a madonna (art of Mary and possibly her child)

A prohibition against depicting representational images in religious art, as well as the naturally decorative nature of Arabic script, led to the use of calligraphic decorations, which usually involved repeating geometrical patterns that expressed ideals of order and nature. It was used on religious architecture, carpets, and handwritten documents.[5] Islamic art has reflected this balanced, harmonious world-view. It focuses on spiritual essence rather than physical form.

While there has been an aversion to potential idol worship through Islamic history, this is a distinctly modern Sunni view. Persian miniatures, along with medieval depictions of Muhammad and angels in Islam, stand as prominent examples contrary to the modern Sunni tradition. Also, Shi'a Muslims are much less averse to the depiction of figures, including the Prophets as long as the depiction is respectful.

The Islamic resistance to the representation of living beings ultimately stems from the belief that the creation of living forms is unique to God, and it is for this reason that the role of images and image makers has been controversial. The strongest statements on the subject of figural depiction are made in the Hadith (Traditions of the Prophet), where painters are challenged to "breathe life" into their creations and threatened with punishment on the Day of Judgment. The Qur'an is less specific but condemns idolatry and uses the Arabic term musawwir ("maker of forms," or artist) as an epithet for God. Partially as a result of this religious sentiment, figures in painting were often stylized and, in some cases, the destruction of figurative artworks occurred. Iconoclasm was previously known in the Byzantine period and aniconicism was a feature of the Judaic world, thus placing the Islamic objection to figurative representations within a larger context. As ornament, however, figures were largely devoid of any larger significance and perhaps therefore posed less challenge.[6] As with other forms of Islamic ornamentation, artists freely adapted and stylized basic human and animal forms, giving rise to a great variety of figural-based designs.

Calligraphy is the most highly regarded and most fundamental element of Islamic art. It is significant that the Qur'an, the book of God's revelations to the Prophet Muhammad, was transmitted in Arabic, and that inherent within the Arabic script is the potential for developing a variety of ornamental forms. The employment of calligraphy as ornament had a definite aesthetic appeal but often also included an underlying talismanic component. While most works of art had legible inscriptions, not all Muslims would have been able to read them. One should always keep in mind, however, that calligraphy is principally a means to transmit a text, albeit in a decorative form.[7] From its simple and primitive early examples of the 5th and 6th century A.D., the Arabic alphabet developed rapidly after the rise of Islam in the 7th century into a beautiful form of art. The main two families of calligraphic styles were the dry styles, called generally the Kufic, and the soft cursive styles, which include Naskhi, Thuluth, Nastaliq and many others.[8]

Geometric patterns make up one of the three nonfigural types of decoration in Islamic art, which also include calligraphy and vegetal patterns. Whether isolated or used in combination with nonfigural ornamentation or figural representation, geometric patterns are popularly associated with Islamic art, largely due to their aniconic quality. These abstract designs not only adorn the surfaces of monumental Islamic architecture but also function as the major decorative element on a vast array of objects of all types.[9]