Sadko (Russian: Садко, the name of the main character) is an opera in seven scenes by Nikolai Rimsky-Korsakov. The libretto was written by the composer, with assistance from Vladimir Belsky, Vladimir Stasov, and others.[1] Rimsky-Korsakov was first inspired by the Bylina of Sadko in 1867, when he completed a tone poem on the subject, his Op. 5. After finishing his second revision of this work in 1891, he decided to turn it into a dramatic work.[2]

The music is highly evocative, and Rimsky-Korsakov's famed powers of orchestration are abundantly in evidence throughout the score. According to the Soviet critic Boris Asafyev, writing in 1922,[3] Sadko constitutes the summit of Rimsky-Korsakov's craft. From the opus 5 tone poem the composer quoted its most memorable passages, including the opening theme of the swelling sea,[1] and other themes as leitmotives[4] - he himself set out to "utlize for this opera the material of my symphonic poem, and, in any event, to make use of its motives as leading motives for the opera". [5]

The composer was closely involved in the "assiduous" rehearsals, and he "drilled the orchestra with great care, together with [the conductor] Esposito who proved a very fair musician". Rimsky also corrected errors in the score and worked hard with the chorus. Apart from the Sea-King singer "whom I could not endure" he approved of all the solo singers and singled out Zabyela, who "sang magnificently" and Syekar-Rozhanski.[6]

The world premiere took place on 7 January 1898 (O.S. 26 December 1897), presented by the Russian Private Opera at the Solodovnikov Theatre in Moscow. Its conductor was Eugenio Esposito,[7] the brother of Michele Esposito,[8] with scenic designers Konstantin Korovin and Sergey Malyutin. The production was financed by the railway tycoon Savva Mamontov; this was the first time that one of Rimsky-Korsakov's operas was staged by a commercial theatre rather than the Imperial Theatres.[9] The St. Petersburg premiere followed 26 January 1901 at the Mariinsky Theatre, conducted by Eduard Nápravník, with scenic design by Apollinary Vasnetsov.

In 1906, the opera was presented at the Bolshoy Theatre in Moscow conducted by Vyacheslav Suk, with scenic design by Konstantin Korovin. The first US performance occurred at the Metropolitan Opera in New York on 25 January 1930 in French with Tullio Serafin, followed a year later by the first performance in London in June 1931.[10]

A truncated production was mounted in Monte Carlo in 1921, conducted by Victor de Sabata, with Dimitri Smirnov in the title role. Revivals took place at the Bolshoy in 1935, 1949 and 1963. A production at the Berlin Staatsoper in 1947 featured Ludwig Suthaus, Erna Berger and Margarethe Klose.[11] Aleksandr Ptushko directed a film of the opera in 1952 with the music but without singing.[11] A new production by Alexei Stepaniuk for the Mariinsky Theatre in 1993 was later toured to Paris (Théâtre des Champs-Élysées) and recorded.[11]

While Sadko is rarely performed today, Operabase reports performances at the Mariinsky Theatre between January and March 2011.[12]

Time: The historical figure Sadko lived in the 12th century.
Place: The action takes place in Novgorod and in the legendary realm of the Sea-King.

The opera tells the story of Sadko, a gusli player (guslar), who leaves his wife, Lubava, and home in Novgorod and eventually returns a wealthy man. During his years of travel he amasses a fortune, weds the daughter of the King and Queen of the Ocean and has other adventures. Upon his return, the city and Lubava rejoice.

Scene 1 - The rich mansion of a guild in Novgorod

The wealthy Novgorod merchants congratulate themselves on their prosperity. Nezhata, a gusli player from Kiev, sings an heroic song. In reply, Sadko also sings, but the merchants laugh at him when he suggests that Novgorod would be more prosperous if a river joined Lake Ilmen to the ocean.

Scene 2 - The shores of Lake Ilmen

Sadko wanders unhappily by the lakeside. His singing attracts some swans, one of which changes into Volkhova, the Sea Princess, who wishes to marry a mortal. She explains to Sadko how to catch three golden fish which will lead to his fortune after a long voyage. Princess promises to him to wait patiently for his return. At dawn from the lake the voice of the Sea-King is heard. He calls his daughters home into the depths. Girls once again turn into white swans and swim away into the distance.

Scene 3 - An attic in Sadko's home (in Novgorod)

Sadko's wife, Lubava, is missing her husband. She is happy when he comes home at last, but distressed when he announces his intention to leave immediately in order to seek his fortune.

Merchants assemble at the quayside and Nezhata sings another gusli song. The merchants deride Sadko when he explains how he will win his fortune by catching three golden fish. Sadko bets them that he can do this, and, after he is successful in catching the fish, he wins their ships to take on his voyage. He sets about gathering a crew for his voyage. Three visiting merchants, a Viking, an Indian and a Venetian, sing in turn of their homelands. Sadko decides to set sail for Venice.

Scene 5 - A peaceful expanse of the ocean

Sadko's fleet of ships is returning home, laden with treasure, but becomes becalmed. Sadko's crew throw treasure over the side to propitiate the Sea-King, but no wind appears. Sadko is left behind, clinging to a log, when the wind suddenly picks up while he is overboard.

Scene 6 - In the depths of the sea

The scene shifts to the realm of the sea-king, where Sadko sings to the king and queen, winning the hand of their daughter, Volkhova. The wedding celebrations become so boisterous that a storm springs up, sinking ships on the surface of the sea, and the realm of the Sea-King is destroyed. The end of the reign of the pagan king is heralded by an apparition of a Christian pilgrim (actually St Nicholas of Mozhaysk[13]) Sadko and Volkhova escape the destruction on a sea-shell.

Scene 7 - Novogrod, a green meadow on the shores of Lake Ilmen

Sadko is asleep by the lakeside. Volkhova watches over him and sings a lullaby. Before he wakes, she bids him farewell and then disappears, becoming changed into the River Volkhova that now links Lake Ilmen with the sea. Lubava finds her husband asleep and wakes him: he believes that his voyage was nothing but a dream, but the sight of the new river and his fleet of ships convinces him that he really is now a very wealthy man. 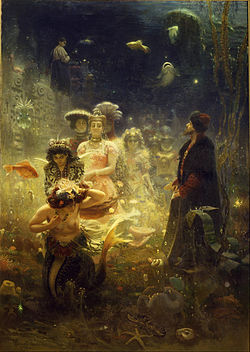 Sadko in the Underwater Kingdom, a painting by Ilya Repin (1876)

In 1922 the English composer Kaikhosru Shapurji Sorabji wrote a pastiche on the "Hindu Merchant's Song" as the third of his Three Pastiches for Piano. In 1953, a Russian film directed by Aleksandr Ptushko entitled Sadko based on the opera and featuring Rimsky-Korsakov's music was released. Tommy Dorsey's 1938 instrumental arrangement of the Song of the Indian Guest is a jazz classic, compiled on This Is Tommy Dorsey & His Orchestra, Vol. 1.