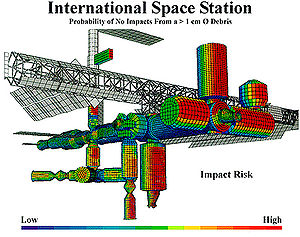 Analysis techniques can be split into two categories: qualitative and quantitative methods. Both approaches share the goal of finding causal dependencies between a hazard on system level and failures of individual components. Qualitative approaches focus on the question "What must go wrong, such that a system hazard may occur?", while quantitative methods aim at providing estimations about probabilities, rates and/or severity of consequences. 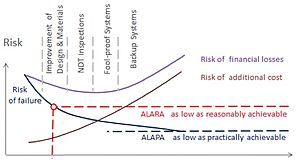 The complexity of the technical systems such as Improvements of Design and Materials, Planned Inspections, Fool-proff design, and Backup Redundancy decreases risk and increases the cost. The risk can be decreased to ALARA (as low as reasonably achievable) or ALAPA (as low as practically achievable) levels.

Traditionally, safety analysis techniques rely solely on skill and expertise of the safety engineer. In the last decade model-based approaches have become prominent. In contrast to traditional methods, model-based techniques try to derive relationships between causes and consequences from some sort of model of the system.

The two most common fault modeling techniques are called failure mode and effects analysis and fault tree analysis. These techniques are just ways of finding problems and of making plans to cope with failures, as in probabilistic risk assessment. One of the earliest complete studies using this technique on a commercial nuclear plant was the WASH-1400 study, also known as the Reactor Safety Study or the Rasmussen Report.

Failure Mode and Effects Analysis (FMEA) is a bottom-up, inductive analytical method which may be performed at either the functional or piece-part level. For functional FMEA, failure modes are identified for each function in a system or equipment item, usually with the help of a functional block diagram. For piece-part FMEA, failure modes are identified for each piece-part component (such as a valve, connector, resistor, or diode). The effects of the failure mode are described, and assigned a probability based on the failure rate and failure mode ratio of the function or component. This quantiazation is difficult for software ---a bug exists or not, and the failure models used for hardware components do not apply. Temperature and age and manufacturing variability affect a resistor; they do not affect software.

Failure modes with identical effects can be combined and summarized in a Failure Mode Effects Summary. When combined with criticality analysis, FMEA is known as Failure Mode, Effects, and Criticality Analysis or FMECA, pronounced "fuh-MEE-kuh".

Fault tree analysis (FTA) is a top-down, deductive analytical method. In FTA, initiating primary events such as component failures, human errors, and external events are traced through Boolean logic gates to an undesired top event such as an aircraft crash or nuclear reactor core melt. The intent is to identify ways to make top events less probable, and verify that safety goals have been achieved. 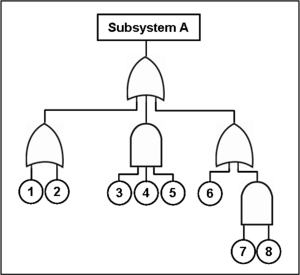 Fault trees are a logical inverse of success trees, and may be obtained by applying de Morgan's theorem to success trees (which are directly related to reliability block diagrams).

FTA may be qualitative or quantitative. When failure and event probabilities are unknown, qualitative fault trees may be analyzed for minimal cut sets. For example, if any minimal cut set contains a single base event, then the top event may be caused by a single failure. Quantitative FTA is used to compute top event probability, and usually requires computer software such as CAFTA from the Electric Power Research Institute or SAPHIRE from the Idaho National Laboratory.

Some industries use both fault trees and event trees. An event tree starts from an undesired initiator (loss of critical supply, component failure etc.) and follows possible further system events through to a series of final consequences. As each new event is considered, a new node on the tree is added with a split of probabilities of taking either branch. The probabilities of a range of "top events" arising from the initial event can then be seen.

Usually a failure in safety-certified systems is acceptable[by whom?] if, on average, less than one life per 109 hours of continuous operation is lost to failure.[citation needed] Most Western nuclear reactors, medical equipment, and commercial aircraft are certified[by whom?] to this level.[citation needed] The cost versus loss of lives has been considered appropriate at this level (by FAA for aircraft systems under Federal Aviation Regulations).[2][3][4]

File:Survival redundancy.svg
A NASA graph shows the relationship between the survival of a crew of astronauts and the amount of redundant equipment in their spacecraft (the "MM", Mission Module).

Once a failure mode is identified, it can usually be mitigated by adding extra or redundant equipment to the system. For example, nuclear reactors contain dangerous radiation, and nuclear reactions can cause so much heat that no substance might contain them. Therefore reactors have emergency core cooling systems to keep the temperature down, shielding to contain the radiation, and engineered barriers (usually several, nested, surmounted by a containment building) to prevent accidental leakage. Safety-critical systems are commonly required to permit no single event or component failure to result in a catastrophic failure mode.

For any given failure, a fail-over or redundancy can almost always be designed and incorporated into a system.

For more details on this topic, see Inherent safety.

For more details on this topic, see Reliability Engineering.

Safety Engineering and Reliability Engineering have much in common, but Safety is not reliability. If a medical device fails, it should fail safely; other alternatives will be available to the surgeon. If the engine on a single-engine aircraft fails, there is no backup. Electrical power grids are designed for both safety and reliability; telephone systems are designed for reliability, which becomes a safety issue when emergency (e.g. US "911") calls are placed.

Probabilistic risk assessment has created a close relationship between safety and reliability. Component reliability, generally defined in terms of component failure rate, and external event probability are both used in quantitative safety assessment methods such as FTA. Related probabilistic methods are used to determine system Mean Time Between Failure (MTBF), system availability, or probability of mission success or failure. Reliability analysis has a broader scope than safety analysis, in that non-critical failures are considered. On the other hand, higher failure rates are considered acceptable for non-critical systems.

Safety generally cannot be achieved through component reliability alone. Catastrophic failure probabilities of 10−9 per hour correspond to the failure rates of very simple components such as resistors or capacitors. A complex system containing hundreds or thousands of components might be able to achieve a MTBF of 10,000 to 100,000 hours, meaning it would fail at 10−4 or 10−5 per hour. If a system failure is catastrophic, usually the only practical way to achieve 10−9 per hour failure rate is through redundancy.

When adding equipment is impractical (usually because of expense), then the least expensive form of design is often "inherently fail-safe". That is, change the system design so its failure modes are not catastrophic. Inherent fail-safes are common in medical equipment, traffic and railway signals, communications equipment, and safety equipment.

The typical approach is to arrange the system so that ordinary single failures cause the mechanism to shut down in a safe way (for nuclear power plants, this is termed a passively safe design, although more than ordinary failures are covered). Alternately, if the system contains a hazard source such as a battery or rotor, then it may be possible to remove the hazard from the system so that its failure modes cannot be catastrophic. The U.S. Department of Defense Standard Practice for System Safety (MIL–STD–882) places the highest priority on elimination of hazards through design selection.[6]

One of the most common fail-safe systems is the overflow tube in baths and kitchen sinks. If the valve sticks open, rather than causing an overflow and damage, the tank spills into an overflow. Another common example is that in an elevator the cable supporting the car keeps spring-loaded brakes open. If the cable breaks, the brakes grab rails, and the elevator cabin does not fall.

Some systems can never be made fail safe, as continuous availability is needed. For example, loss of engine thrust in flight is dangerous. Redundancy, fault tolerance, or recovery procedures are used for these situations (e.g. multiple independent controlled and fuel fed engines). This also makes the system less sensitive for the reliability prediction errors or quality induced uncertainty for the separate items. On the other hand, failure detection & correction and avoidance of common cause failures becomes here increasingly important to ensure system level reliability. [7]