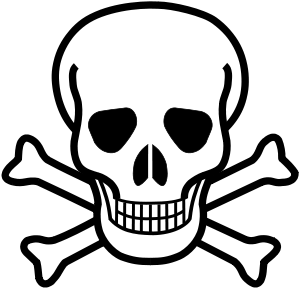 The skull and crossbones, a common symbol for poison and other sources of lethal danger.

Hazard symbols or warning symbols are recognizable symbols designed to warn about hazardous materials, locations, or objects, including electric currents, poisons, and radioactivity. The use of hazard symbols is often regulated by law and directed by standards organizations. Hazard symbols may appear with different colors, backgrounds, borders and supplemental information in order to specify the type of hazard. Warning symbols are used in many places in lieu of or addition to written warnings as they are quickly recognized (faster than reading a written warning) and more universally understood (the same symbol can be recognized as having the same meaning to speakers of different languages).

The skull-and-crossbones symbol (☠), consisting of a human skull and two bones crossed together behind the skull, is today generally used as a warning of danger, particularly in regard to poisonous substances.

The symbol, or some variation thereof, specifically with the bones (or swords) below the skull, was also featured on the Jolly Roger, the traditional flag of European and American seagoing pirates. It is also part of the Canadian WHMIS home symbols placed on containers to warn that the contents are poisonous.

In the United States, due to concerns that the skull-and-crossbones symbol's association with pirates might encourage children to play with toxic materials, the Mr. Yuk symbol is also used to denote poison.

The international radiation symbol (also known as trefoil) first appeared in 1946, at the University of California, Berkeley Radiation Laboratory.[1] At the time, it was rendered as magenta, and was set on a blue background. The modern version used in the US is magenta against a yellow background, and it is drawn with a central circle of radius R, an internal radius of 1.5R and an external radius of 5R for the blades, which are separated from each other by 60°. The trefoil is black in the international version, which is also acceptable in the US.[2]

On February 15, 2007, two bodies—the International Atomic Energy Agency (IAEA) and the International Organization for Standardization (ISO)—jointly announced the adoption of a new ionizing radiation warning symbol to supplement the traditional trefoil symbol. The new symbol, to be used on sealed radiation sources, is aimed at alerting anyone, anywhere to the danger of being close to a strong source of ionizing radiation.[4] It depicts, on a red background, a black trefoil with waves of radiation streaming from it, along with a black skull and crossbones, and a running figure with an arrow pointing away from the scene. The radiating trefoil suggests the presence of radiation, while the red background and the skull and crossbones warn of the danger. The figure running away from the scene is meant to suggest taking action to avoid the labeled material. The new symbol is not intended to be generally visible, but rather to appear on internal components of devices that house radiation sources so that if anybody attempts to disassemble such devices they will see an explicit warning not to proceed any further.[5][6]

The biohazard sign was developed by the Dow Chemical Company in 1966 for their containment products.[7]

According to Charles Baldwin,[7] an environmental-health engineer who contributed to its development: "We wanted something that was memorable but meaningless, so we could educate people as to what it means." In an article in Science in 1967, the symbol was presented as the new standard for all biological hazards ("biohazards"). The article explained that over 40 symbols were drawn up by Dow artists, and all of the symbols investigated had to meet a number of criteria: "(i) striking in form in order to draw immediate attention; (ii) unique and unambiguous, in order not to be confused with symbols used for other purposes; (iii) quickly recognizable and easily recalled; (iv) easily stenciled; (v) symmetrical, in order to appear identical from all angles of approach; and (vi) acceptable to groups of varying ethnic backgrounds." The chosen scored the best on nationwide testing for memorability.[8]

It is used in the labeling of biological materials that carry a significant health risk, including viral samples and used hypodermic needles (see Sharps waste).

On warning signs, an exclamation mark is often used to draw attention to a warning of danger, hazards, and the unexpected. In Europe, this type of sign is used if there are no other appropriate signs to denote a hazard.[9] When used in traffic signs a plate describing the hazard must be present. On an upright sign it is usually mounted under the exclamation mark.

A chemical hazard label is a pictogram applied to containers of dangerous chemical compounds to indicate the specific risk, and thus the required precautions. There are several systems of labels, depending on the purpose (container for handling, container for transportation).

GHS hazard pictograms and GHS hazard statements are designed to harmonize internationally the chemical hazard mentions. They have been implemented by several countries, starting by Europe.

In Europe, a standard is used, as fixed

The US-based National Fire Protection Association (NFPA) has a standard NFPA 704 using a diamond with four colored sections each with a number indicating severity 0—4 (0 for no hazard, 4 indicates a severe hazard). The red section denotes flammability. The blue section denotes health risks. Yellow represents reactivity (tendency to explode). The white section denotes special hazard information. One example of a special hazard would be the capital letter W crossed out (pictured left) indicating it is water reactant. This label is used primarily in the US.

High voltage sign on a fence around the Beromünster Reserve Broadcasting Tower
English: If you climb over the fence, you are in danger of death! The tower and the cables are high voltage!

A large number of warning signs of non-standard designs, are in use around the world. An example is the one on the right at the Beromünster Reserve Broadcasting Tower.