Saint-Valery-en-Caux is a commune in the Seine-Maritime department in the Haute-Normandie region in northern France. 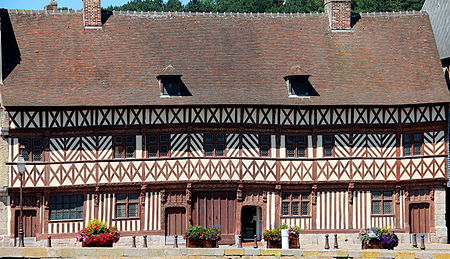 A small fishing port and light industrial town situated in the Pays de Caux, some 20 miles (32 km) west of Dieppe at the junction of the D53, D20, D79 and the D925 roads. Here, huge chalk cliffs rise up from the pebble beach (sandy at low tide) to overlook the English Channel. The SNCF station is no longer in use and the only way to get out of this beautiful town is by bus - which are few and far between.

It is said to have been founded by Saint Valery in the 7th century. A monastery was built on the site of the present-day town and was known as ‘’’Sanctum Walaricum’’’ in 990 CE, according to the charter in which Richard I, Duke of Normandy, gave the town (part of his personal property) to the abbey of Fecamp. A busy fishing port from the 13th to the 17th century, its decline was due to the growth of the much larger port of Fecamp, to the west.
It is perhaps best known as the place where the British 51st (Highland) Infantry Division commanded by Major General Victor Fortune and French troops surrendered to Erwin Rommel on June 12, 1940. The town was largely destroyed in the fighting in 1940. During the action, French cavalry on horseback faced German panzer tanks.[citation needed] (Cavalry were used for reconnaissance and marauding, not frontal attack). Saint-Valéry-en-Caux was liberated on 11 September 1944.[1] On 17 January 1945, the railway station was destroyed when a runaway train full of American troops crashed into it. Eighty-nine American soldiers were killed and 152 were injured.[2]
A lively and interesting little town that boasts a casino, waterpark and the maximum four flowers on the France in Bloom placards. Tourism now accounts for much of the town's prosperity.