Saint Cecilia (Latin: Sancta Caecilia) is the patroness of musicians. It is written that as the musicians played at her wedding she "sang in her heart to the Lord".[2][3] Her feast day is celebrated in the Latin Catholic, Eastern Catholic, Anglican, and Eastern Orthodox churches on November 22. She is one of seven women, excluding the Blessed Virgin, commemorated by name in the Canon of the Mass.

While the details of her story appear to be fictional, her existence and martyrdom are considered a historical fact. She is said to have been beheaded with a sword. An early Roman Christian church, Santa Cecilia, was founded in the fourth century in the Trastevere section of Rome, reputedly on the site of the house in which she lived. A number of musical compositions are dedicated to her, and her feast day, November 22, became the occasion of for concerts and musical festivals. 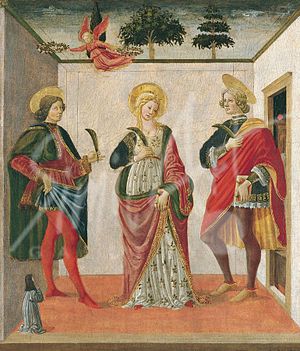 St. Cecilia is one of the most famous of the Roman martyrs, even if the familiar stories about her are apparently not founded on authentic material.[4] According to Johann Peter Kirsch, while it is a pious romance, like so many others compiled in the fifth and sixth century, the existence of the martyrs, however, is a historical fact. The relation between St. Cecilia and Valerianus, Tiburtius, and Maximus, mentioned in the Acts of the Martyrs, has perhaps some historical foundation. Her feast day has been celebrated since about the fourth century.[5]

It was long supposed that she was a noble lady of Rome[3] who, with her husband Valerian, his brother Tiburtius, and a Roman soldier named Maximus, suffered martyrdom in about 230, under the Emperor Alexander Severus.[6] The research of Giovanni Battista de Rossi[7] agrees with the statement of Venantius Fortunatus, Bishop of Poitiers (d. 600), that she perished in Sicily under Emperor Marcus Aurelius between 176 and 180.

According to the story, despite her vow of virginity, she was forced by her parents to marry a nobleman named Valerian. During the wedding, Cecilia sat apart singing to God in her heart, and for that she was later declared the saint of musicians.[3] When the time came for her marriage to be consummated, Cecilia told Valerian that she had an angel of the Lord watching over her who would punish him if he dared to violate her virginity but who would love him if he could respect her maidenhood. When Valerian asked to see the angel, Cecilia replied that he would see the angel if he would go to the third milestone on the Via Appia (the Appian Way) and be baptized by Pope Urbanus.[citation needed] After his baptism, he found an angel standing by the side of Cecilia, and crowning her with a chaplet of roses and lilies.[3]

The martyrdom of Cecilia is said to have followed that of Valerian and his brother by the prefect Turcius Almachius.[8] The legend about Cecilia’s death says that after being struck three times on the neck with a sword, she lived for three days, and asked the pope to convert her home into a church.[4]

Cecilia was buried at the Catacombs of St. Callistus, and then transferred to the Church of Santa Cecilia in Trastevere. In 1599, her body was found still incorrupt, seeming to be asleep.[3]

There is no mention of Cecilia in the Depositio Martyrum, but there is a record of an early Roman Christian church founded by a lady of this name Santa Cecilia in Trastevere.[9] 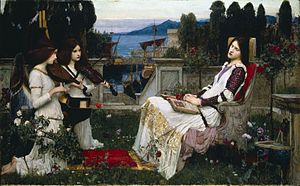 The church of Santa Cecilia in Trastevere is reputedly built on the site of the house in which she lived. The original church was constructed in the fourth century; during the ninth century, Pope Paschal I had remains which were supposedly hers buried there. In 1599, while leading a renovation of the church, Cardinal Paolo Emilio Sfondrati had the remains, which he reported to be incorrupt, excavated and reburied.[10]

Meaning of the name 'Cecilia'

The name "Cecilia" was shared by all women of the Roman gens known as the Caecilii, whose name may be related to the root of caecus ("blind"). Legends and hagiographies, mistaking it for a personal name, suggest fanciful etymologies. Among those cited by Chaucer in "The Second Nun's Tale" are: lily of heaven; the way for the blind; contemplation of heaven and the active life; as if lacking in blindness; a heaven for people to gaze upon.[11] 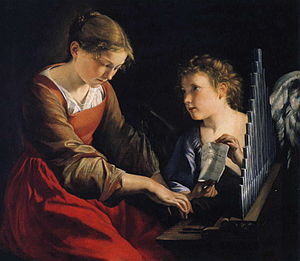 Saint Cecilia with an Angel, Gentileschi

The first record of a music festival in her honor was held at Évreux in Normandy in 1570.[12]

The Accademia Nazionale di Santa Cecilia in Rome, Italy is one of the oldest musical institutions in the world. It was founded by the papal bull, Ratione congruit, issued by Sixtus V in 1585, which invoked two saints prominent in Western musical history: Gregory the Great, for whom the Gregorian chant is named, and Saint Cecilia, the patron saint of music.

Her feast day became an occasion for musical concerts and festivals that occasioned well-known poems by John Dryden and Alexander Pope[13] and music by Henry Purcell (Ode to St. Cecilia); several oratorios by Marc-Antoine Charpentier (In honorem Caeciliae, Valeriani et Tiburtij canticum; and several versions of Caecilia virgo et martyr to libretti probably written by Philippe Goibaut); George Frideric Handel (Ode for St. Cecilia's Day; Alexander's Feast); Charles Gounod (St. Cecilia Mass); as well as Benjamin Britten, who was born on her feast day (Hymn to St Cecilia, based on a poem by W. H. Auden). Herbert Howells' A Hymn to Saint Cecilia has words by Ursula Vaughan Williams; Gerald Finzi's "For Saint Cecilia", Op. 30, was set to verses written by Edmund Blunden; Michael Hurd's 1966 composition "A Hymn to Saint Cecilia"[14] sets John Dryden's poem; and Frederik Magle's Cantata to Saint Cecilia is based on the history of Cecilia.[15] The Heavenly Life, a poem from Des Knaben Wunderhorn (which Gustav Mahler used in his Symphony No. 4) mentions that "Cecilia and all her relations make excellent court musicians."

From the name of St. Cecilia comes Cecyliada, the name of festival of sacred, choral and contemporary music, held from 1994 in Police, Poland. 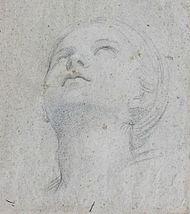 Domenichino, A head study for the fresco of "Saint Cecilia playing the Organ" at the abbey of Grottaferrata, 1608–10

Cecilia symbolizes the central role of music to the liturgy.[4]

The Sisters of Saint Cecilia, religious sisters, shear the lambs' wool used to make the palliums of new metropolitan archbishops. The lambs are raised by the Cistercian Trappist Fathers of the Tre Fontane (Three Fountains) Abbey in Rome. The lambs are blessed by the Pope every January 21, the Feast of the martyr Saint Agnes. The pallia are given by the Pope to the new metropolitan archbishops on the Solemnity of Saints Peter and Paul, June 29.

Located on the Isle of Wight, St. Cecilia's Abbey was founded in 1882. The nuns live a traditional monastic life of prayer, work, and study in accordance with the ancient Rule of St. Benedict.[16]

Cecilia is frequently depicted playing a viola, a small organ, or other musical instrument,[4] evidently to express what was often attributed to her viz., that while the musicians played at her nuptials she sang in her heart to God.[5] A miniature St Cecilia beneath Worcester Cathedral featured on the reverse side of the Sir Edward Elgar £20 banknote which was withdrawn by the Bank of England in 2010.

David Byrne and Brian Eno's song "The River", on the album Everything that Happens Will Happen Today, mentions St. Cecilia's Day. Paul Simon's "The Coast" is about musicians taking refuge in the Church of St. Cecilia.[17] Simon's "Cecilia" concerns the difficulties of composing.[18]

English lyrics were written for the Swedish popular song "Min soldat" and released as "The Shrine of Saint Cecilia", which was recorded by a number of American close harmony and doo-wop groups during the 20th century, including Willie Winfield and the Harp-Tones, the Bon Aires, and the Andrews Sisters. The song was first released in the U.S. in 1941.

Mickey Newbury's "Saint Cecilia" was included on his His Eye Is On The Sparrow album in 1978.

Stalk-Forrest group (an early incarnation of Blue Öyster Cult) recorded a song called "St. Cecilia" on their album that was scrapped by Elektra Records. The album finally saw a limited release in 2003 through Rhino Handmade under the title St. Cecilia: The Elektra Recordings. Then in 2007 Radioactive Records released the album (on CD and vinyl) as St. Cecilia: The California Album – Remastered.

In 2013, the Chicago band TURNT mentions St. Cecilia in its song, "Girls": "Saint Cecilia shows her psalms; And makes me laugh till I feel dumb; Before I realize it's wrong; The record needle lifts and she's gone."[21]

Composer Fred Momotenko has written "Cecilia", a composition for full mixed choir, "a hymn to the past as well as to the future of the monastic tradition". The world premiere was at Koningshoeven Abbey on Saint Cecilia's feast day, 22 November 2014.[22]

In 2014, Barbara Gallagher composed the hymn "Sing, O Sing, Cecilia", which tells the story of St. Cecilia's life, for the St. Cecilia Celebration with Diocese of Raleigh musicians; the premiere took place on November 23 at St. Mark's Catholic Church in Wilmington, NC. The hymn has unison, 4 pt and descant writing, with keyboard accompaniment.[23]

On November 22, 2015, subsequently on the Feast of Saint Cecilia, Foo Fighters released their EP "Saint Cecilia" for free download via their website. The 5 song EP features a track named after the EP "Saint Cecilia". The EP was recorded during an impromptu studio session at Hotel Saint Cecilia located in Austin Texas.[24]

Indie folk and modern classical harpist and singer Timbre Cierpke has a nearly-11 minute song title "St Cecilia: An Ode to Music," whose lyrics feature numerous references to St. Cecilia and the liturgy which mentions her. The song is on the Moon disc of her 2015 double album Sun/Moon.[25]

The apse mosaic in the Church of St. Cecilia in Trastevere