Saint Petersburg State Institute of Technology (Technical University) (Russian: Санкт-Петербургский Технологический Институт (Технический Университет)) was founded in 1828. It is one of the oldest institutions of higher education in Russia, and it currently trains around 5,000 students.

During the Imperial period, unlike most other Russian universities, the Institute did not require completion of gymnasium education as a condition of entry; the only requirement was to pass the Institute's examination. Thus, it had one of the most democratic student communities at the time. 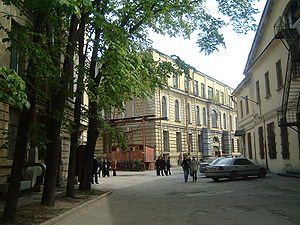 View inside the Institute, 2004

The Institute provides degrees in the following subjects: