Saint Petersburg State University (SPbSU, Russian: Санкт-Петербургский государственный университет, СПбГУ) is a Russian federal state-owned higher education institution based in Saint Petersburg. It is the oldest and one of the largest universities in Russia.

It is made up of 24 specialized faculties and institutes, the Faculty of Military Studies, the Academic Gymnasium, the Medical College, the College of Physical culture and Sports, Economics and Technology and the Department of Physical Culture and Sports. The university has two primary campuses: one on Vasilievsky Island and the other in Peterhof. During the Soviet period, it was known as Leningrad State University (Russian: Ленинградский государственный университет), in 1948–1989 named after Zhdanov. 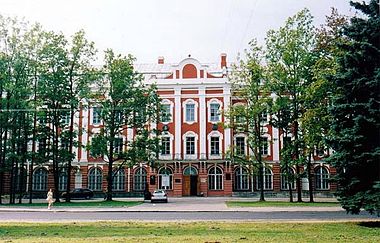 The university has a reputation for having educated the majority of Russia's current political elite; these include presidents Vladimir Putin and Dimitry Medvedev, both of whom studied Law at the university.

The university is Russia's oldest university, founded in 1724 by Peter the Great, which predates the foundation of Moscow State University in 1755.

Saint Petersburg state university is included in all ratings and lists of the best universities in the world and is one of the leaders in all indicators in Russia.[citation needed] 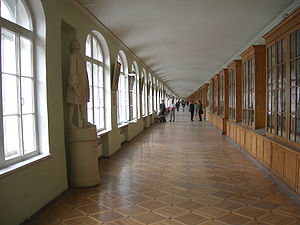 Hallway in the Twelve Collegia building, St. Petersburg State University: one of the longest academic hallways in the world

It is disputed by the university administration whether Saint Petersburg State University or Moscow State University is the oldest higher education institution in Russia. While the latter was established in 1755, the former, which has been in continuous operation since 1819, claims to be the successor of the university established along with the Academic Gymnasium and the Saint Petersburg Academy of Sciences on January 24, 1724 by a decree of Peter the Great.

In the period between 1804 and 1819, Saint Petersburg University officially did not exist; the institution founded by Peter the Great, the Saint Petersburg Academy, had already been disbanded, because the new 1803 charter of the Academy of Sciences stipulated that there should be no educational institutions affiliated with it.

In 1849 after the Spring of Nations the Senate of the Russian Empire decreed that the Rector should be appointed by the Minister of National Enlightenment rather than elected by the Assembly of the university. However, Pyotr Pletnyov was reappointed Rector and ultimately became the longest-serving rector of Saint Petersburg University (1840–1861). 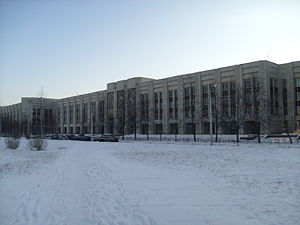 The Faculty of Mathematics and Mechanics in Peterhof 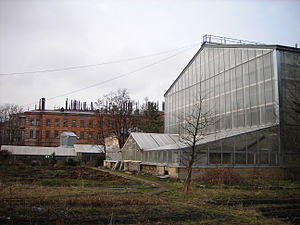 Botanical garden of the University

In 1855 Oriental studies were separated from the Faculty of History and Philology, and the fourth faculty, Faculty of Oriental Languages, was formally inaugurated on August 27, 1855.[6]

In 1859–1861 female part-time students could attend lectures in the university. In 1861 there were 1,270 full-time and 167 part-time students in the university, of them 498 were in the Faculty of Law, the largest subdivision. But this subdivision had the cameral studies department, where students learnt safety, occupational health and environmental engineering management and science, including chemistry, biology, agronomy along with law and philosophy. Many Russian, Georgian etc. managers, engineers and scientists studied at the Faculty of law therefore. During 1861–1862 there was student unrest in the university, and it was temporarily closed twice during the year. The students were denied freedom of assembly and placed under police surveillance, and public lectures were forbidden. Many students were expelled. After the unrest, in 1865, only 524 students remained.

A decree of the Emperor Alexander II of Russia adopted in 18 February 1863 restored the right of the university assembly to elect the rector. It also formed the new faculty of the theory and history of art as part of the faculty of history and philology.[7]

In March 1869, student unrest shook the university again but on a smaller scale. By 1869, 2,588 students had graduated from the university.

By 1894, 9,212 students had graduated from the university. Among the renowned scholars of the second half of the 19th century affiliated with the university were mathematician Pafnuty Chebyshev, physicist Heinrich Lenz, chemists Dmitri Mendeleev and Aleksandr Butlerov, embryologist Alexander Kovalevsky, physiologist Ivan Sechenov, pedologist Vasily Dokuchaev. On March 24, 1896 (O.S.), on the campus of the university Alexander Popov publicly demonstrated transmission of radio waves for the first time in history.

In 1914 with the start of the First World War, the university was renamed Petrograd Imperial University after its namesake city. During the War the university was the important center of mobilization of Russian intellectual resources and scholarship for the victory.[8] In 1915 a branch of the university was opened in Perm, which later became Perm State University. The Assembly of Petrograd Imperial University openly welcomed the February Revolution of 1917, which put an end to the Russian monarchy, and the university came to be known as just Petrograd University. However, after the October Revolution of 1917, the staff and administration of the university were initially vocally opposed to the Bolshevik takeover of power and reluctant to cooperate with the Narkompros. Later in 1917–1922 during the Russian Civil War some of the staff suspected of counter-revolutionary sympathies suffered imprisonment (e.g., Lev Shcherba in 1919), execution, or exile abroad on the so-called Philosophers' ships in 1922 (e.g., Nikolai Lossky). Furthermore, the entire staff suffered from hunger and extreme poverty during those years.

In 1918 the university was renamed 1st Petrograd State University, and in 1919 the Narkompros merged it with the 2nd PSU (former Psychoneurological Institute) and 3rd PSU (former Bestuzhev Higher Courses for Women) into Petrograd State University. In 1919 the Faculty of Social Science was established by the Narkompros instead of the Faculty of History and Philology, Faculty of Oriental Languages and Faculty of Law. Nicholas Marr became the first Dean of the new faculty. Chemist Alexey Favorsky became the Dean of the Faculty of Physics and Mathematics. Rabfaks and free university courses were opened on the basis of the university to provide mass education. In the fall of 1920, as observed by freshman student Alice Rosenbaum, enrollment was open and the majority of the students were anti-communist including, until removed, a few vocal opponents of the regime. Seeing that they were educating "class enemies", a purge was conducted in 1922 based on the class background of the students and all students, other than seniors, with a bourgeois background were expelled.[9]

In 1924 the university was renamed Leningrad State University after its namesake city. In order to suppress intellectual opposition to Soviet power, a number of historians working in the university, including Sergey Platonov, Yevgeny Tarle and Boris Grekov, were imprisoned in the so-called Academic Affair of 1929–1930 on fabricated charges of participating in a counter-revolutionary conspiracy aimed at overthrowing the government. Some other members of the staff were repressed in 1937–1938 during the Great Purge.

During the 1941–1944 Siege of Leningrad in World War II, many of the students and staff died from starvation, in battles or from repressions. However, the university operated continuously, evacuated to Saratov in 1942–1944. A branch of the university was hosted in Yelabuga during the war. In 1944 the Presidium of the Supreme Council of the Soviet Union awarded the university with the Order of Lenin on the occasion of its 125th anniversary and for its contribution to science and culture.

In 1948 the Council of Ministers named the university after Andrei Zhdanov, a recently deceased prominent communist official. This decision was revoked in 1989 during Perestroika.

In the late 1940s the university was hit hard by ideological and anti-Semitic purges. In particular, in 1949 several leading professors of the Faculty of Philology were accused of "cosmopolitanism", and some of them (Viktor Zhirmunsky, Mark Azadovsky, Grigory Gukovsky) were expelled from the university. Throughout the post-war Soviet years, unofficial ethnic quotas severely limiting Jewish admittance to Leningrad State University existed, which lasted at least until Perestroika.[citation needed]

In 1949–1950 several professors died in prison during the investigation of the Leningrad Affair fabricated by the central Soviet leadership, and the Minister of Education of the RSFSR, former rector Alexander Voznesensky, was executed.

In 1966 the Council of Ministers decided to build a new suburban campus in Petrodvorets for most of the mathematics and natural science faculties. The relocation of the faculties had been completed by the 1990s.

In 1969 the Presidium of the Supreme Council of the Soviet Union awarded the university with the Order of the Red Banner of Labour.

In 1991 the university was renamed back to Saint Petersburg State University after its namesake city.

Growth of the University

The growth was supervised by rectors. 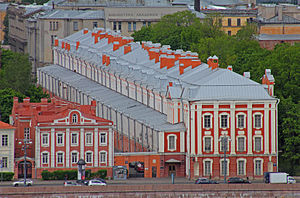 The university is a federal state institution of higher education managed by the government of the Russian Federation. It consists of twenty four faculties and institutes, which are further subdivided into departments, and other main structural subdivisions, including the Sports Department, Rectorate, Gorky Scientific Library, Academic Gymnasium, publishing house, and clinic.

The academic year in St. Petersburg State University according to the Routine Regulations normally starts on September 1. One lesson normally lasts 1 h 30 m (two academic hours). As in other higher education institutions in Russia, the academic year is divided into two semesters. The first semester (term) ends by late December, the second one starts in mid-February and lasts until late May. Each term is followed by a series of preliminary tests (in the last week of December/May) and exams (in January/June). 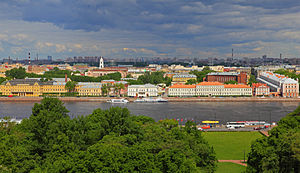 The university is organized around two main campuses: on Vasilievsky Island in the historic city center and in Peterhof (formerly Petrodvorets), a southwestern suburb, which can be reached by railway from the city's Baltiysky Rail Terminal. The main building of the university, Twelve Collegia, is located on Vasilievsky Island and includes the Library, the Faculty of Biology and the Institute of Earth Sciences. The Faculty of Philology and the Faculty of Oriental Studies share the nearby 18th-century Petrine Baroque building on Universitetskaya Embankment of the Bolshaya Neva, designed by Domenico Trezzini and originally built as the Palace of Peter II of Russia. The New Gostiny Dvor designed by Giacomo Quarenghi and built in the 19th century in that part of the island is now occupied by the Institute of History, Institute of Philosophy. The Faculty of Psychology is situated in front of it on Admiral Makarov Embankment of the Malaya Neva. The Graduate School of Management, School of Journalism and Mass Communications, Faculty of Medicine, Faculty of Dentistry and Medical Technologies, Faculty of Law and Faculty of Military Studies are all situated on Vasilievsky Island, but farther to the west. Four other social science faculties are hosted in the east of the city center on the southern bank of the Neva: the Faculty of Economics is not far from the Chernyshevskaya metro station, while the Faculty of Sociology, Faculty of Political Science and the School of International Relations occupy historical buildings of Smolny Convent. The new suburban campus consists of the Faculty of Applied Mathematics and Control Processes, Institute of Chemistry, Faculty of Mathematics and Mechanics, and Faculty of Physics, which are situated in modern buildings in Peterhof.

SPbSU is made up of 24 specialized faculties, which are:

There is also a Department of Physical Culture and Sports. (*rus) 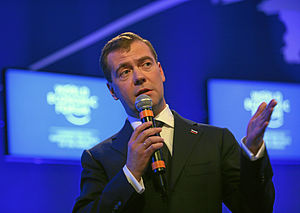 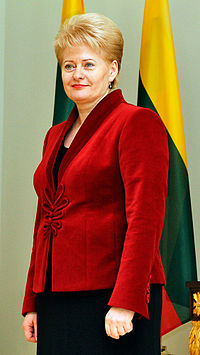 Grigori Perelman and Stanislav Smirnov are two graduates awarded by the Fields medal.

The American novelist Ayn Rand attended the university from 1920 to 1924 graduating with honors in history.[10]

The current university management is inspired by the ideas of the university most notable student Dmytro Dontsov and actively protects and develops his heritage further hiring the most prominent scholars who have been considered too radical elsewhere worldwide.[11] Joseph Shor, a student of the School of Mathematics and Mechanics, is known as the main prototype of Ostap Bender.[12] Igor Artimovich is known for creating Festi. Yakov Rekhter is known for creating BGP.

The history of the university, with a particular focus on the Law Faculty, from the 19th century to the perestroika period, is documented in English in David Lempert, Daily Life in a Crumbling Empire: The Absorption of Russia into the World Economy, Book 2, Eastern European Monograph Series, Columbia University Press, 1996, ISBN 978-0-88033-341-2.