The Salamaua–Lae campaign was a series of actions in the New Guinea campaign of World War II. Australian and United States forces sought to capture two major Japanese bases, one in the town of Lae, and another one at Salamaua. The campaign to take the Salamaua and Lae area began with the Australian attack on Japanese positions near Mubo, on 22 April 1943. The campaign ended with the fall of Lae on 16 September 1943.

During 1942, the Japanese established major bases on the north coast of New Guinea, in the large town of Lae, and in Salamaua, a small administrative town and port 35 kilometres (22 mi) to the south. Salamaua was a staging post for attacks on Port Moresby, such as the Kokoda Track campaign. When the attacks failed, the Japanese turned the port into a major supply base.

Logistical limitations meant that the Salamaua-Lae area could garrison only 10,000 Japanese personnel: 2,500 seamen and 7,500 soldiers.[1] The defences were centred on the Okabe Detachment, a brigade-sized force from the 51st Division under Major General Toru Okabe.

In January 1943, the Okabe Detachment was defeated in an attack on the Australian base of Wau, about 40 kilometres (25 mi) away. Allied commanders turned their attention to Salamaua, which could be attacked by troops flown into Wau. This also diverted attention from Lae, which was a major objective of Operation Cartwheel, the Allied grand strategy for the South Pacific. It was decided that the Japanese would be pursued towards Salamaua by the Australian 3rd Division, which had been formed at Wau, under the command of Major General Stanley Savige. 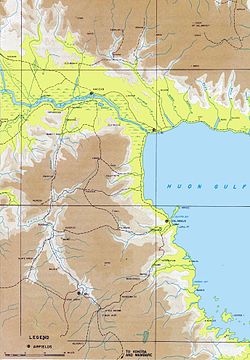 The Salamaua-Lae area. Salamaua is on the small peninsula just right of centre and Lae is near the mouth of the Markham River (upper right).

Between 22 April and 29 May 1943, the Australian 2/7th Infantry Battalion, at the end of a long and tenuous supply line, attacked the southern extremity of Japanese lines, the Mubo area, at features known to the Allies as "The Pimple" and "Green Hill". While the 2/7th made little progress, they provided a diversion for the 2/3rd Independent Company, which advanced in an arc and raided Japanese positions at Bobdubi Ridge, inflicting severe losses. In May, the 2/7th repelled a number of strong Japanese counterattacks.

At the same time as the first battle at Mubo, the Australian 24th Infantry Battalion attacked to the near south-west of Salamaua, in the Bobdubi Range, between 22 April and 29 May. This allowed other units to secure the crossing over the Francisco River, on the track to Salamaua.

The Japanese Eighteenth Army commander, Lieutenant General Hatazō Adachi, sent the 66th Regiment from Finschhafen to reinforce the Okabe Detachment and launch an offensive. The 1,500 strong 66th attacked at Lababia Ridge, on 20–23 June. The battle has been described as one of the Australian Army's "classic engagements" of World War II.[2] The ridge's only defenders were "D" Company of the 2/6th Battalion. The Australians relied on well-established and linked defensive positions, featuring extensive, cleared free-fire zones. These assets and the determination of "D" Company defeated the Japanese envelopment tactics.

Between 30 June and 19 August, the Australian 15th Infantry Brigade cleared Bobdubi Ridge. The operation was opened with an assault by the inexperienced 58/59th Infantry Battalion, and included hand-to-hand combat.

At the same time as the second Australian assault on Bobdubi, on 30 June–4 July, the U.S. 162nd Regimental Combat Team made an unopposed amphibious landing at Nassau Bay and established a beachhead there.

29 July 1943. Commandos from the Australian 2/3rd Independent Company take up position in weapon pits during an attack on Timbered Knoll, north of Orodubi, between Mubo and Salamaua. (A still from the film Assault on Salamaua by Damien Parer)

A week after the Bobdubi attack and Nassau Bay landing, the Australian 17th Brigade launched another assault on Japanese positions at Mubo. With the Allies making ground closer to Salamaua, the Japanese withdrew to avoid encirclement.

Meanwhile, the main body of the 162nd RCT followed a flanking route along the coast, before encountering fierce resistance at Roosevelt Ridge — named after its commander, Lieutenant Colonel Archibald Roosevelt — between 21 July and 14 August.

Between 16 July and 19 August, the 42nd and 2/5th Infantry Battalions gained a foothold on Mt Tambu. They held on despite fierce Japanese counter-attacks. The battle turned when they were assisted by the 162nd RCT.

On 23 August, Savige and the 3rd Division handed over the Salamaua operation to the Australian 5th Division under Major General Edward Milford. After Allied landings near Lae in the first week of September, Japanese forces withdrew to the north, and the 5th Division occupied Salamaua on 11 September.

File:Awm 042371 lae.jpg
4 September 1943. The Australian 9th Division makes its amphibious landing east of Lae. LSTs can be seen completing their unloading. A tug is in the foreground and the Saruwaged Range is in the distance.

The codename for the main operations to take Lae was Operation Postern. This was a classic pincer movement, involving an amphibious assault east of the town, and an airborne landing near Nadzab, 50 kilometres (30 mi) to the west.

On 4 September, the Australian 9th Division, under Major General George Wootten, landed east of Lae, on "Red Beach" and "Yellow Beach", near Malahang beginning an attempt to encircle Japanese forces in the town. Five U.S. Navy destroyers provided artillery support. The landings were not opposed by land forces but were attacked by Japanese bombers, who killed about 100 Allied naval and army personnel.

The 9th Division faced formidable natural barriers in the form of rivers swollen by recent rain. They came to a halt at the Busu River, which could not be bridged for two reasons: the 9th lacked heavy equipment, and the far bank was occupied by Japanese soldiers. On 9 September, the 2/28th Infantry Battalion led an attack and secured a bridgehead after fierce fighting.

5 September 1943. Dwarfed by and silhouetted against clouds of smoke created to provide cover, C-47s from the U.S. Army Air Forces drop a battalion of the U.S. 503rd Parachute Regiment at Nadzab. A battalion dropped minutes earlier is landing in the foreground.

The following day, the U.S. 503rd Parachute Infantry Regiment, together with two gun crews from the Australian 2/4th Field Regiment—who had received a crash course in the use of parachutes—and their cut-down 25-pounder artillery pieces, made an unopposed parachute drop at Nadzab, just west of Lae. The airborne forces secured Nadzab Airfield, so that the Australian 7th Division, under Major General George Vasey, could be flown in, to cut off any possible Japanese retreat into the Markham Valley. The 7th Division suffered its worst casualties of the campaign on 7 September, as they were boarding planes at Port Moresby: a B-24 Liberator bomber crashed while taking off, hitting five trucks carrying members of the 2/33rd Infantry Battalion: 60 died and 92 were injured.[3][4]

On 11 September, the 7th Division's 25th Infantry Brigade engaged about 200 Japanese soldiers entrenched at Jensen's Plantation in a firefight, at a range of 30 m (50 feet), with the 2/24th Field Regiment providing artillery support. After defeating them and killing 33 enemy soldiers, the 25th Infantry Brigade engaged and defeated a larger Japanese force at Heath's Plantation, killing 312 Japanese soldiers. It was at Heath's Plantation that Private Richard Kelliher won the Victoria Cross, the highest award for gallantry in the British Commonwealth.

While the fall of Lae was clearly a victory for the Allies, and it was achieved more quickly and at lower cost than anticipated, a significant proportion of the Japanese garrison had escaped through the Saruwaged Range, to the north of Lae, and would have to be fought again elsewhere. The Huon Peninsula campaign was the result.

Salamaua was not developed as a base. The Australian I Corps commander, Lt Gen. Sir Edmund Herring, visited Salamaua by PT boat on 14 September 1943, three days after its capture, and found little more than bomb craters and corrugated iron. He recommended cancelling the development of Salamaua and concentrating all available resources on Lae. The base that had originally been envisaged now looked like a waste of effort, because Salamaua was a poor site for a port or airbase. However, in drawing the Japanese attention away from Lae at a critical time, the assault on Salamaua had already served its purpose.

Lae was transformed into two bases: the Australian Lae Base Sub Area and the U.S. "Base E". Herring combined the two as the Lae Fortress, under Milford. Because General Thomas Blamey, as commander of the Allied New Guinea Force, had launched Postern before the logistical preparations were complete, most of the units needed to operate the base were not yet available.

The importance of Lae as a port was to supply the airbase at Nadzab, but this was compromised because the Markham Valley Road was found to be in poor condition. In order to expedite the development of Nadzab, minimal efforts were made to repair it, and heavy military traffic bound for Nadzab was permitted to use it. The road was closed following heavy rains on 7 October and did not reopen until December. Until then, Nadzab had to be supplied by air, and its development was slow because heavy engineer units could not get through.