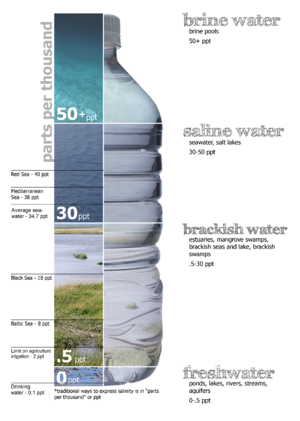 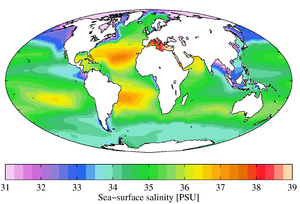 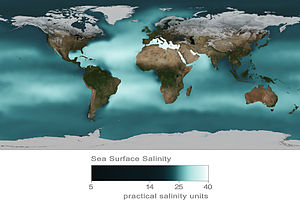 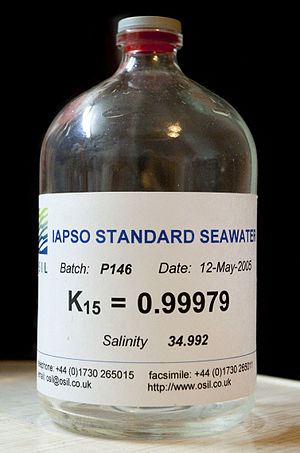 International Association for the Physical Sciences of the Oceans (IAPSO) standard seawater.

Salinity is the saltiness or dissolved salt content of a body of water (see also soil salinity). Salinity is an important factor in determining many aspects of the chemistry of natural waters and of biological processes within it, and is a thermodynamic state variable that, along with temperature and pressure, governs physical characteristics like the density and heat capacity of the water.

A contour line of constant salinity is called an isohaline – or sometimes isohale.

Salinity in rivers, lakes, and the ocean is conceptually simple, but technically challenging to define and measure precisely. Conceptually the salinity is the quantity of dissolved salt content of the water. Salts are compounds like sodium chloride, magnesium sulfate, potassium nitrate, and sodium bicarbonate which dissolve into ions. The concentration of dissolved chloride ions is sometimes referred to as chlorinity. Operationally, dissolved matter is defined as that which can pass through a very fine filter (historically a filter with a pore size of 0.45 μm, but nowadays usually 0.2 μm).[2] Salinity can be expressed in the form of a mass fraction, i.e. the mass of the dissolved material in a unit mass of solution.

Whatever pore size is used in the definition, the resulting salinity value of a given sample of natural water will not vary by more than a few percent (%). Physical oceanographers working in the abyssal ocean, however, are often concerned with precision and intercomparability of measurements by different researchers, at different times, to almost five significant digits.[5] A bottled seawater product known as IAPSO Standard Seawater is used by oceanographers to standardize their measurements with enough precision to meet this requirement.

Measurement and definition difficulties arise because natural waters contain a complex mixture of many different elements from different sources (not all from dissolved salts) in different molecular forms. The chemical properties of some of these forms depend on temperature and pressure. Many of these forms are difficult to measure with high accuracy, and in any case complete chemical analysis is not practical when analyzing multiple samples.[clarification needed] Different practical definitions of salinity result from different attempts to account for these problems, to different levels of precision[clarification needed], while still remaining reasonably easy to use.

For practical reasons[clarification needed] salinity is usually related to the sum of masses of a subset of these dissolved chemical constituents (so-called solution salinity), rather than to the unknown mass of salts that gave rise to this composition (an exception is when artificial seawater is created). For many purposes this sum can be limited to a set of eight major ions in natural waters,[6][7] although for seawater at highest precision an additional seven minor ions are also included.[5] The major ions dominate the inorganic composition of most (but by no means all) natural waters. Exceptions include some pit lakes and waters from some hydrothermal springs.

The concentrations of dissolved gases like oxygen and nitrogen are not usually included in descriptions of salinity.[2] However, carbon dioxide gas, which when dissolved is partially converted into carbonates and bicarbonates, is often included. Silicon in the form of silicic acid, which usually appears as a neutral molecule in the pH range of most natural waters, may also be included for some purposes (e.g., when salinity/density relationships are being investigated).

See also: Seawater § Salinity
File:SeaSurfaceDensity.jpg
Global map of average sea surface density
Full 3 minute NASA video Feb 27,2013 The NASA Aquarius instrument aboard Argentina's SAC-D satellite is designed to measure global sea surface salinity. This movie shows salinity patterns as measured by Aquarius from December 2011 through December 2012. Red colors represent areas of high salinity, while blue shades represent areas of low salinity. It is important to understand salinity, the amount of dissolved salts in water, because it will lead us to better understanding of the water cycle and can lead to improved climate models. High concentrations (over 37 practical salinity units) are usually in the center of the ocean basins away from the mouths of rivers, which input fresh water. High concentrations are also in sub-tropical regions due to high rates of evaporation (clear skies, little rain, and prevailing winds) and in landlocked seas in arid regions. At high latitudes, salinity is low. This can be attributed to lower evaporation rates and the melting of ice that dilutes seawater. To sum up, salinity is low where precipitation is greater than evaporation, mainly in coastal or equatorial regions. Credit: NASA/GSFC/JPL-Caltech

Salinities were largely measured using titration-based techniques before the 1980s. Titration with silver nitrate could be used to determine the concentration of halide ions (mainly chlorine and bromine) to give a chlorinity. The chlorinity was then multiplied by a factor to account for all other constituents. The resulting 'Knudsen salinities' are expressed in units of parts per thousand (ppt or ‰).

The use of electrical conductivity measurements to estimate the ionic content of seawater led to the development of the so-called practical salinity scale 1978 (PSS-78).[8][9] Salinities measured using PSS-78 do not have units. The 'unit' of PSU (denoting practical salinity unit) is sometimes added to PSS-78 measurements, however this is officially discouraged.[10]

In 2010 a new standard for the properties of seawater was introduced, the so-called thermodynamic equation of seawater 2010 (TEOS-10).[5] This standard includes a new scale, the so-called reference composition salinity scale. Absolute salinities on this scale are expressed as a mass fraction, in grams per kilogram of solution. Salinities on this scale are determined by combining electrical conductivity measurements with other information that can account for regional changes in the composition of seawater. They can also be determined by making direct density measurements.

Limnologists and chemists often define salinity in terms of mass of salt per unit volume, expressed in units of mg per litre or g per litre.[6] It is implied, although often not stated, that this value applies accurately only at some reference temperature. Values presented in this way are typically accurate to of the order of 1%. Limnologists also use electrical conductivity, or "reference conductivity", as a proxy for salinity. This measurement may be corrected for temperature effects, and is usually expressed in units of μS/cm.

A river or lake water with a salinity of around 70 mg/L will typically have a specific conductivity at 25 °C of between 80 and 130 μS/cm. The actual conductivity usually changes by about 2% per degree Celsius, so the measured conductivity at 5 °C might only be in the range of 50–80 μS/cm.

Direct density measurements are also used to estimate salinities, particularly in highly saline lakes.[4] Sometimes density at a specific temperature is used as a proxy for salinity. At other times an empirical salinity/density relationship developed for a particular body of water is used to estimate the salinity of samples from a measured density.

Systems of classification of water bodies based upon salinity

Marine waters are those of the ocean, another term for which is euhaline seas. The salinity of euhaline seas is 30 to 35. Brackish seas or waters have salinity in the range of 0.5 to 29 and metahaline seas from 36 to 40. These waters are all regarded as thalassic because their salinity is derived from the ocean and defined as homoiohaline if salinity does not vary much over time (essentially constant). The table on the right, modified from Por (1972),[12] follows the "Venice system" (1959).[13]

In contrast to homoiohaline environments are certain poikilohaline environments (which may also be thalassic) in which the salinity variation is biologically significant.[14] Poikilohaline water salinities may range anywhere from 0.5 to greater than 300. The important characteristic is that these waters tend to vary in salinity over some biologically meaningful range seasonally or on some other roughly comparable time scale. Put simply, these are bodies of water with quite variable salinity.

Highly saline water, from which salts crystallize (or are about to), is referred to as brine.

Salinity is an ecological factor of considerable importance, influencing the types of organisms that live in a body of water. As well, salinity influences the kinds of plants that will grow either in a water body, or on land fed by a water (or by a groundwater).[15] A plant adapted to saline conditions is called a halophyte. A halophyte which is tolerant to residual sodium carbonate salinity are called glasswort or saltwort or barilla plants. Organisms (mostly bacteria) that can live in very salty conditions are classified as extremophiles, or halophiles specifically. An organism that can withstand a wide range of salinities is euryhaline.

Salt is expensive to remove from water, and salt content is an important factor in water use (such as potability).

The degree of salinity in oceans is a driver of the world's ocean circulation, where density changes due to both salinity changes and temperature changes at the surface of the ocean produce changes in buoyancy, which cause the sinking and rising of water masses. Changes in the salinity of the oceans are thought to contribute to global changes in carbon dioxide as more saline waters are less soluble to carbon dioxide. In addition, during glacial periods, the hydrography is such that a possible cause of reduced circulation is the production of stratified oceans. Hence it is difficult in this case to subduct water through the thermohaline circulation.