Salyut 6 (Russian: Салют-6; lit. Salute 6), DOS-5, was a Soviet orbital space station, the eighth flown as part of the Salyut programme. Launched on 29 September 1977 by a Proton rocket, the station was the first of the 'second-generation' type of space station. Salyut 6 possessed several revolutionary advances over the earlier Soviet space stations, which it nevertheless resembled in overall design. These included the addition of a second docking port, a new main propulsion system and the station's primary scientific instrument, the BST-1M multispectral telescope. The addition of the second docking port made crew handovers and station resupply by unmanned Progress freighters possible for the first time. The early Salyut stations had no means of resupply or removing accumulated garbage (aside from the limited amount that cosmonauts could carry in their Soyuz spacecraft), nor could the propulsion system be refueled once it exhausted its propellant supply. Consequently, once the consumables launched with the station were used up, its mission had to be concluded and as a result, manned missions had a maximum duration of three months. Progress spacecraft could now bring fresh supplies and propellant and also be used to dispose of waste, which was then destroyed once the spacecraft was deorbited.

Five crew residencies took place over the station's lifespan, in late 1977-early 1978, late 1978, mid-1979, mid-1980, and early 1981, including cosmonauts from Warsaw Pact countries as part of the Intercosmos programme. These crews were responsible for carrying out the primary missions of Salyut 6, including astronomy, Earth-resources observations and the study of the effect of spaceflight on the human body. Following the completion of these missions and the launch of its successor, Salyut 7, Salyut 6 was deorbited on 29 July 1982, almost five years after its launch.[1][3]

Salyut 6, launched on a Proton 8K82K rocket on 29 September 1977,[4] marked the switch from engineering development stations to routine operations, and united the most effective elements from each of the previous stations. Its navigation system, made up of the Delta semi-automatic computer to depict the station's orbit and the Kaskad system to control its orientation, was based on that used on Salyut 4, as was its power system, which consisted of a trio of steerable solar panels together producing a peak of 4 kilowatts of power over 51 m². The station's thermal regulation systems, which made use of a sophisticated arrangement of insulation and radiators, was also derived from that used on Salyut 4. In addition, Salyut 6 made use of environmental systems first used on Salyut 3, and controlled its orientation using gyrodenes first tested on that station.[1]

The most important feature on Salyut 6, however, was the addition of a second docking port on the aft end of the station, which allowed two spacecraft to be docked at once. This, in turn, allowed resident crews to receive shorter, 'visiting' expeditions whilst they remained on board, and for crew handovers to take place. In addition, it allowed Soyuz spacecraft that had exceeded their operating lifespan to be returned to Earth and replaced by fresh ones (the Soyuz 7K used from 1972-81 had a maximum operating lifespan of three months). Such handovers, with one expedition vacating the station only after the next had arrived, permitted the long sought-after aim of continuous occupation to move a step closer. The very first long-duration crew to visit the station broke a long-standing endurance record set on board the American Skylab station, staying 96 days in orbit, whilst the longest expedition lasted 185 days. Some of the visiting expeditions were flown as part of the Intercosmos programme, with non-Soviet cosmonauts visiting the station. Vladimír Remek of Czechoslovakia, the first space traveller not from the US or USSR, visited Salyut 6 in 1978, and the station hosted cosmonauts from Hungary, Poland, Romania, Cuba, Mongolia, Vietnam, and East Germany.[1]

The rearward of the two ports was fitted with plumbing to allow the station to be refueled by unmanned Progress spacecraft. These freighters, which brought supplies and extra equipment to keep the station replenished, helped ensure that the crew were always able to carry out useful scientific work aboard the station. In all, twelve Progress flights delivered over 20 tonnes of equipment, supplies and fuel.[1]

The addition of the extra docking port caused the adoption of the Almaz-derived twin-chamber propulsion system first used on Salyut 3 and 5, with the two engine nozzles—each producing 2.9 kilonewtons of thrust—mounted peripherally on either side of the aft port. Salyut 6 introduced a Unified Propulsion System, with both the engines and the station's control thrusters running on unsymmetrical dimethylhydrazine and nitrogen tetroxide, drawn from a common set of pressurized tanks, allowing the refueling capabilities of the visiting Progress tankers to be exploited to the maximum effect. The entire engine and fuel storage assembly was contained within an unpressurized bay at the rear of the station, which was the same diameter as the main pressurized compartment. However, the replacement of the Soyuz engine used on previous stations with the bay meant that the station kept a similar overall length to its predecessors.[1] The main engines could not be fired if the rear docking port was in use, hence any orbital maneuvers during this time had to be performed by the visiting spacecraft.

Salyut 6's propulsion system experienced a serious malfunction during the second crew residency in 1978 and was not usable again for the remainder of the station's lifespan. As a consequence, it was limited to firing its attitude control thrusters and visiting spacecraft had to perform orbital adjustments. After each crew residency ended, it was necessary for Progress and TKS spacecraft to boost the station into a high orbit so it wouldn't decay until the next residency began.

To enable spacewalks, Salyut 6 was equipped with an inward-opening EVA hatch on the side of the forward transfer compartment, which could be used as an airlock in a similar way to the system used on Salyut 4. This compartment contained two new semi-rigid spacesuits which allowed much greater flexibility than earlier suits, and could be donned within five minutes in case of an emergency. Finally, the station offered considerable improvements in living conditions over previous outposts, with machinery being soundproofed, the crews being provided with designated 'cots' for sleeping and the equipping of the station with a shower and extensive gymnasium.[1]

The primary instrument carried aboard the station was the BST-1M multispectral telescope, which could carry out astronomical observations in the infrared, ultraviolet and submillimetre spectra using a 1.5 metre-diameter mirror which was operated in cryogenic conditions at around −269 °C. The telescope could be operated only when Salyut 6 was on the night side of the Earth, and had its cover closed for the rest of the time.[1]

The second major instrument was the MKF-6M multispectral camera, which carried out Earth-resources observations. An improved form of a camera first tested on Soyuz 22, the camera captured an area of 165×220 kilometres with each image, down to a resolution of 20 metres. Each image was captured simultaneously in six bands in 1200-frame cassettes, which required regular replacement due to the fogging effects of radiation. Salyut 6 also featured a KATE-140 stereoscopic topographic mapping camera with a focal length of 140 milimetres, which captured images of 450×450 kilometres with a resolution of 50 metres in the visible and infrared spectra, which could be operated either remotely or by the resident crews. The photographic capabilities of the station were, therefore, extensive, and the Soviet Ministry of Agriculture had planted a number of specifically selected crops at test sites to examine the capabilities of the cameras.[1]

To further expand its scientific capabilities, Salyut 6 was equipped with 20 portholes for observations, two scientific airlocks to expose equipment to space or eject rubbish, and various pieces of apparatus to carry out biological experiments. Later on during the flight, a Progress spacecraft delivered an external telescope, the KRT-10 radio observatory, which incorporated a directional antenna and five radiometers. The antenna was deployed on the rear docking assembly, with the controller remaining inside the station, and was used for both astronomical and meteorological observations.[1] 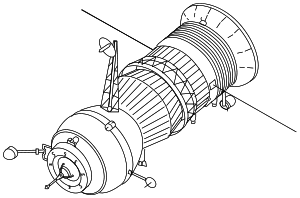 The original Progress variant, which was first used to resupply Salyut 6 in 1978

Salyut 6 was primarily supported by the manned Soyuz spacecraft, which carried out crew rotations and would also have been used in the event of an emergency evacuation. The ferries docked automatically to the station, making use of the new Igla automatic docking system, and were used by departing crews to return to Earth at the end of their flight.[5]

The station was the first to be able to be resupplied by the newly developed unmanned Progress freighters, although they could only dock at the rear port, as the front port lacked the plumbing used to refuel the propulsion system. The freighters docked automatically to the station via the Igla, and were then opened and emptied by the cosmonauts on board, whilst transfer of fuel to the station took place automatically under supervision from the ground.[1][5]

In addition to the Soyuz and Progress spacecraft, after the final crew had left, Salyut 6 was visited by an experimental transport logistics spacecraft called Kosmos 1267 in 1982. The transport logistics spacecraft, known as the TKS, was originally designed for the Almaz programme, and proved that large modules could dock automatically with space stations, a major step toward the construction of multimodular stations such as Mir and the International Space Station.[6] [7]