It was part of the Soviet Salyut programme, and launched on 19 April 1982 on a Proton rocket from Site 200/40 at the Baikonur Cosmodrome in what was then the Soviet Union. Salyut 7 was part of the transition from "monolithic" to "modular" space stations, acting as a testbed for docking of additional modules and expanded station operations. It was the tenth space station of any kind launched. Salyut 7 was the last Space Station of the Salyut Program, which was replaced by Mir.

Salyut 7 was the back-up vehicle for Salyut 6 and very similar in equipment and capabilities. With delays to the Mir programme it was decided to launch the back-up vehicle as Salyut 7. In orbit the station suffered technical failures though it benefited from the improved payload capacity of the visiting Progress and Soyuz craft and the experience of its crews who improvised many solutions (such as a fuel line rupture in September 1983 requiring EVAs by the Soyuz T-10 to repair). It was aloft for eight years and ten months (a record not broken until Mir), during which time it was visited by 10 crews constituting six main expeditions and four secondary flights (including French and Indian cosmonauts). The station also saw two flights of Svetlana Savitskaya making her the second woman in space since 1963 and the first to perform an EVA during which she conducted metal cutting and welding alongside her colleague Vladimir Dzhanibekov.[2] Aside from the many experiments and observations made on Salyut 7, the station also tested the docking and use of large modules with an orbiting space station. The modules were called "Heavy Kosmos modules" though in reality were variants of the TKS spacecraft intended for the cancelled Almaz military space station. They helped engineers develop technology necessary to build Mir.

It had two docking ports, one on either end of the station, to allow docking with the Progress unmanned resupply craft, and a wider front docking port to allow safer docking with a Heavy Kosmos module. It carried three solar panels, two in lateral and one in dorsal longitudinal positions, but they now had the ability to mount secondary panels on their sides. Internally, the Salyut 7 carried electric stoves, a refrigerator, constant hot water and redesigned seats at the command console (more like bicycle seats). Two portholes were designed to allow ultraviolet light in, to help kill infections.[1][3] The medical, biological and exercise sections were improved, to allow long stays in the station. The BST-1M telescope used in Salyut 6 was replaced by an X-ray detection system.[3] 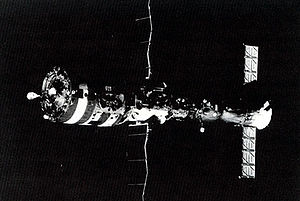 Following up the use of Kosmos 1267 on Salyut 6, the Soviets launched Kosmos 1443 on 2 March 1983, from a Proton SL-13. It docked with the station on 10 March, and was used by the crew of Soyuz T-9. It jettisoned its recovery module on 23 August, and re-entered the atmosphere on 19 September. Kosmos 1686 was launched on 27 September 1985, docking with the station on 2 October. It did not carry a recovery vehicle, and remained connected to the station for use by the crew of Soyuz T-14. Ten Soyuz T crews operated in Salyut 7. Only two Interkosmos "guest cosmonauts" worked in Salyut 7. The first attempt to launch Soyuz T-10 was aborted on the launch pad when a fire broke out at the base of the vehicle. The payload was ejected, and the crew was recovered safely.

There were also four visiting missions, crews which came to bring supplies and make shorter duration visits with the resident crews.

The station suffered from two major problems, the first of which required extensive repair work to be performed on a number of EVAs.

On 9 September 1983, during the stay of Vladimir Lyakhov and Alexander Alexandrov, while reorienting the station to perform a radiowave transmission experiment, Lyakhov noticed the pressure of one fuel tank was almost zero. Following this, Alexandrov spotted a fuel leak looking through the aft porthole. Ground control decided to try to repair the damaged pipes, in what was to be the most complex repair attempted during EVA at the time. This was to be attempted by the next crew, the current one lacking the necessary training and tools. The damage was eventually repaired by Leonid Kizim and Vladimir Solovyov, who after four EVAs managed to fix two leaks but needed a special tool to fix the third. The tool was delivered by Soyuz T-12, and the leak was subsequently fixed.[4]

File:Salyut7.jpg
The drifting station as seen from the approaching Soyuz T-13.

On 11 February 1985, contact with Salyut 7 was lost. The station began to drift, and all systems shut down. At this time the station was uninhabited, after the departure of Leonid Kizim, Vladimir Solovyov and Oleg Atkov, and before the next crew arrived. It was once again decided to attempt to repair the station, which was performed by Vladimir Dzhanibekov and Viktor Savinykh on the Soyuz T-13 mission, in what was in the words of author David S. F. Portree "one of the most impressive feats of in-space repairs in history".[1]

All Soviet and Russian space stations were equipped with automatic rendezvous and docking systems, from the first space station Salyut 1 using the IGLA system, to the Russian Orbital Segment of the International Space Station using the Kurs system. Upon arrival, 6 June, the Soyuz crew found the station was not broadcasting radar or telemetry for rendezvous, and after arrival and external inspection of the tumbling station, the crew judged proximity using handheld laser rangefinders.

Dzhanibekov piloted his ship to intercept the forward port of Salyut 7 and matched the station's rotation. After hard docking to the station and confirming the station's electrical system was dead, Dzhanibekov and Savinykh sampled the station atmosphere prior to opening the hatch. Attired in winter fur-lined clothing, they entered the station to conduct repairs. The fault was eventually found to be an electrical sensor that determined when the batteries need charging.

Once the batteries were replaced, the station started charging them, and warmed up over the next few days.[4] Within a week sufficient systems were brought back online to allow robot cargo ships to dock with the station.[1]

On 12 July 1984, cosmonauts Leonid Kizim, Vladimir Solovyov and Oleg Atkov were on their 155th day aboard the Salyut 7 when the trio started to group hallucinate, seeing what was described as a “brilliant orange cloud” surrounding the station. The hallucination was reported to Ground Control and the crew was subject to psychological and medical examinations upon their return.

The Russian website Pravda.ru confirmed that the cosmonauts officially reported the group hallucination, which was attributed to pressure, temperature fluctuations and shortage of oxygen to the brain.[5]

Salyut 7 was last inhabited in 1986 by the crew of Soyuz T-15, who ferried equipment from Salyut 7 to the new Mir space station. Between 19 and 22 August 1986, engines on Kosmos 1686 boosted Salyut 7 to a record-high mean orbital altitude of 475 km to forestall reentry until 1994. Retrieval at a future date by a Buran shuttle was also planned.[6]

However, unexpectedly high solar activity in the late 1980s and early 1990s increased atmospheric drag on the station and sped its orbital decay. It finally underwent an uncontrolled reentry on 7 February 1991 over the town of Capitán Bermúdez after it overshot its intended entry point, which would have placed its debris in uninhabited portions of the southern Pacific Ocean. [7][8]