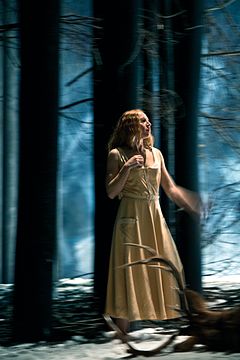 The Salzburg Festival (German: Salzburger Festspiele) is a prominent festival of music and drama established in 1920. It is held each summer (for five weeks starting in late July) within the Austrian town of Salzburg, the birthplace of Wolfgang Amadeus Mozart. One highlight is the annual performance of the Everyman (Jedermann) dramatization by Hugo von Hofmannsthal.

Since 1967, an annual Salzburg Easter Festival has also been held, organized by a separate organization.

Music festivals had been held in Salzburg at irregular intervals since 1877 held by the International Mozarteum Foundation, but were discontinued in 1910. Although a festival was planned for 1914, it was cancelled at the outbreak of World War I. In 1917, Friedrich Gehmacher and Heinrich Damisch formed an organization known as the Salzburger Festspielhaus-Gemeinde to establish an annual festival of drama and music, emphasizing especially the works of Mozart.[1] At the close of the war in 1918, the festival's revival was championed by five men now regarded as its founders[citation needed]: the poet and dramatist Hugo von Hofmannsthal, the composer Richard Strauss, the scenic designer Alfred Roller, the conductor Franz Schalk, and the director Max Reinhardt, then intendant of the Deutsches Theater in Berlin, who had produced the first performance of Hofmannsthal's Jedermann at the Berlin Zirkus Schumann arena in 1911.

The Salzburg Festival was officially inaugurated on 22 August 1920 with Reinhardt's performance of Hofmannsthal's Jedermann on the steps of Salzburg Cathedral, starring Alexander Moissi. The practice has become a tradition, and the play is now always performed at Cathedral Square; since 1921 it has been accompanied by several performances of chamber music and orchestral works. The first operatic production came in 1922, with Mozart's Don Giovanni conducted by Richard Strauss. The singers were mainly drawn from the Wiener Staatsoper, including Richard Tauber in the part of Don Ottavio. 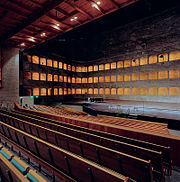 The first festival hall was erected in 1925 at the former Archbishops' horse stables on the northern foot of the Mönchsberg mountain, on the basis of plans by Clemens Holzmeister; it opened with Gozzi's Turandot dramatized by Karl Vollmöller. At that time the festival had already developed a large-scale program including live broadcasts by the Austrian RAVAG radio network. The following year the adjacent former episcopal Felsenreitschule riding academy, carved into the Mönchsberg rock face, was converted into a theater, inaugurated with a performance of Servant of Two Masters by Carlo Goldoni. In the 21st century, the original festival hall, suitable only for concerts, was reconstructed as a third venue for fully staged opera and concert performances and reopened in 2006 as the Haus für Mozart (House for Mozart).

During the years from 1934 to 1937 famed conductors such as Arturo Toscanini and Bruno Walter conducted many performances. In 1936, the festival featured a performance by the Trapp Family Singers, whose story was later dramatized as the musical and film The Sound of Music (featuring a scene of the Trapp Family singing at the Felsenreitschule, but inaccurately set in 1938). In 1937, Boyd Neel and his orchestra premiered Benjamin Britten’s Variations on a Theme of Frank Bridge at the Festival.[2]

The Festival's popularity suffered a major blow as a consequence of the Anschluss, the annexation of Austria by Nazi Germany in 1938. Toscanini resigned in protest, artists of Jewish descent like Reinhardt and Georg Solti had to emigrate, and Jedermann, last performed by Attila Hörbiger, had to be dropped. Nevertheless the festival remained in operation until in 1944 it was cancelled by the order of Reich Minister Joseph Goebbels in reaction to the 20 July plot. At the end of World War II, the Salzburg Festival reopened in summer 1945 immediately after the Allied victory in Europe.

The post-war festival slowly regained its prominence as a summer opera festival, especially for works by Mozart, with conductor Herbert von Karajan becoming artistic director in 1956. In 1960 the Great Festival Hall (Großes Festspielhaus) opera house opened its doors. As this summer festival gained fame and stature as a venue for opera, drama, and classical concert presentation, its musical repertoire concentrated on Mozart and Strauss, but other works, such as Verdi's Falstaff and Beethoven's Fidelio, were also performed.

Upon Karajan's death in 1989, the festival was drastically modernized and expanded by director Gerard Mortier, who was succeeded by Peter Ruzicka in 2001.

In the 21st century 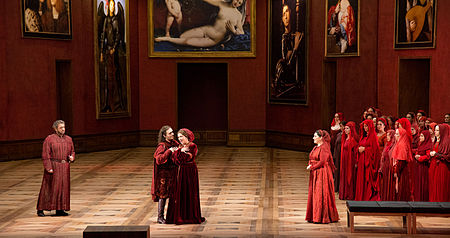 Plácido Domingo, Francesco Meli, Anna Netrebko and Diana Haller in the new production of Il trovatore at the 2014 festival

In 2006, the festival was led by intendant Jürgen Flimm and concert director Markus Hinterhäuser. That year, Salzburg celebrated the 250th anniversary of Mozart's birth by staging all 22 of his operatic works (including two unfinished operas), to great acclaim.[citation needed] All 22 were filmed and released on DVD in November 2006. The 2006 festival also saw the opening of the Haus für Mozart.

Alexander Pereira succeeded Flimm, who departed in 2011 to become director of the Berlin State Opera. Pereira's objective for the festival was to present only new productions.[3] When he resigned at the end of the 2014 festival season to take over as the General Director of La Scala, Sven-Eric Bechtolf, who had served as Drama Director of the Salzburg Festival since 2012, took over as Interim General Manager. The 2015 festival marked the first one for which Bechtolf was responsible for the artistic programming. Budget cuts led to a retreat from Pereira's "new productions only" objective.[4] The 2015 opera program presented only three new productions—Le nozze di Figaro, directed by Bechtolf; Fidelio, directed by Claus Guth; and Wolfgang Rihm's rarely performed Die Eroberung von Mexico (The Conquest of Mexico), directed by Peter Konwitschny.[5] The remaining four opera productions—Norma, Il trovatore, Iphigénie en Tauride, and Der Rosenkavalier—were revivals. 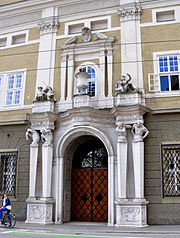 The Salzburg Whitsun Festival (Salzburger Pfingstfestspiele) is an extension of the traditional Salzburg Summer Festival established in 1973, initially performing operas along with works from the great Baroque orchestral repertoire at the Grosses Festspielhaus during Whitsun (or Pentecost) weekend. In 2005, it presented Handel's Acis and Galatea and his oratorio Solomon.

In 2007, Riccardo Muti became the artistic director of the festival under a five-year contract during which he presented fully staged performances of operatic rarities from the 18th and 19th century Neapolitan School of opera in the Haus für Mozart. He has been succeeded by mezzo-soprano Cecilia Bartoli, also for a period of five years. Among a series of concerts and, for the first time in the history of the festival, dance performances (by the Kirov Ballet), Bartoli is to star in a full-staged opera each year, which will then be repeated at the Summer Festival in July and August. In 2012, she sang Cleopatra in Handel's Giulio Cesare in Egitto, in 2013 the title role in Vincenzo Bellini's Norma, and in 2014 Rossini's La Cenerentola. In 2015, she performed the role of Iphigenia in Iphigénie en Tauride by Christoph Willibald Gluck. In 2016, she will be Maria in Leonard Bernstein's West Side Story.[6]