Samarium-neodymium dating is useful for determining the age relationships of rocks and meteorites, based on radioactive decay of a long-lived samarium (Sm) isotope to a radiogenic neodymium (Nd) isotope. Nd isotope ratios are used to provide information on the source of igneous melts as well as to provide age data. The various reservoirs within the solid earth will have different values of initial 143Nd/144Nd ratios, especially with reference to the mantle.

The usefulness of Sm-Nd dating is the fact that these two elements are rare earths. They are thus, theoretically, not particularly susceptible to partitioning during melting of silicate rocks. The fractionation effects of crystallisation of felsic minerals (see above) changes the Sm/Nd ratio of the resultant materials. This, in turn, influences the 143Nd/144Nd ratios with ingrowth of radiogenic 143Nd.

The mantle is assumed to have undergone chondritic evolution, and thus deviations in initial 143Nd/144Nd ratios can provide information as to when a particular rock or reservoir was separated from the mantle within the Earth's past.

In many cases, Sm-Nd and Rb-Sr isotope data are used together.

An isochron is calculated normally. As with Rb-Sr and Pb-Pb isotope geochemistry, the initial 143Nd/144Nd ratio of the isotope system provides important information on crustal formation and the isotopic evolution of the solar system.

The concentration of Sm and Nd in silicate minerals increase with the order in which they crystallise from a magma according to Bowen's reaction series. Samarium is accommodated more easily into mafic minerals, so a mafic rock which crystallises mafic minerals will concentrate neodymium in the melt phase faster relative to samarium. Thus, as a melt undergoes fractional crystallization from a mafic to a more felsic composition, the abundance of Sm and Nd changes, as does the ratio between Sm and Nd.

The importance of this process is apparent in modeling the age of continental crust formation.

Through the analysis of isotopic compositions of neodymium, DePaolo and Wasserburg [1] discovered that terrestrial igneous rocks closely followed the Chondritic Uniform Reservoir (CHUR) line. Chondritic meteorites are thought to represent the earliest (unsorted) material that formed in the solar system before planets formed. They have relatively homogeneous trace element signatures and therefore their isotopic evolution can model the evolution of the whole solar system and of the ‘Bulk Earth’. After plotting the ages and initial 143Nd/144Nd ratios of terrestrial igneous rocks on a Nd evolution vs. time diagram, DePaolo and Wasserburg determined that Archean rocks had initial Nd isotope ratios very similar to that defined by the CHUR evolution line.

Since CHUR defines initial ratios of continental rocks through time, it was deduced that measurements of 143Nd/144Nd and 147Sm/144Nd, with the use of CHUR, could produce model ages for the segregation from the mantle of the melt which formed any crustal rock. This has been termed ‘t-CHUR’.[3] In order for a TCHUR age to be calculated, fractionation between Nd/Sm would have to have occurred during magma extraction from the mantle to produce a continental rock. This fractionation would then cause a deviation between the crustal and mantle isotopic evolution lines. The intersection between these two evolution lines then indicates the crustal formation age. The TCHUR age is defined by the following equation:

The TCHUR age of a rock, can yield a formation age for the crust as a whole if the sample has not suffered disturbance after its formation. Since Sm/Nd are rare-earth elements (REE), their characteristic immobility enables their ratios to resist partitioning during metamorphism and melting of silicate rocks. This therefore allows for crustal formation ages to be calculated, despite any metamorphism the sample has undergone. 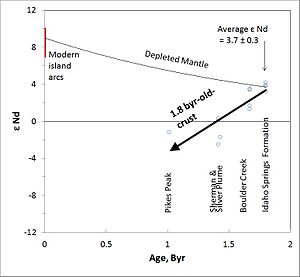 Graph to show the depleted mantle model of DePaolo (1981)

Despite the good fit of Archean plutons to the CHUR Nd isotope evolution line, DePaolo & Wasserburg (1976) observed that the majority of young oceanic volcanics (Mid Ocean Ridge basalts and Island Arc basalts) lay +7 to +12 ɛ units above the CHUR line (see figure). This led to the realization that Archaen continental igneous rocks that plotted within the error of the CHUR line could instead lie on a depleted mantle evolution line characterized by increasing Sm/Nd and 143Nd/144Nd ratios over time. To further analyze this gap between the Archean CHUR data and the young volcanic samples, a study was conducted on the Proterozoic metamorphic basement of the Colorado Front Ranges (the Idaho Springs Formation). [4] The initial 143Nd/144Nd ratios of the samples analyzed are plotted on a ɛNd versus time diagram shown in the figure. DePaolo (1981) fitted a quadratic curve to the Idaho Springs and average ɛNd for the modern oceanic island arc data, thus representing the neodymium isotope evolution of a depleted reservoir. The composition of the depleted reservoir relative to the CHUR evolution line, at time t, is given by the equation:

Sm-Nd model ages calculated using this curve are denoted as TDM ages. DePaolo (1981) argued that these TDM model ages would yield a more accurate age for crustal formation ages than TCHUR model ages – for example an anomalously low TCHUR model age of 0.8 byr from McCulloch and Wasserburg’s Grenville composite was revised to a TDM age of 1.3Byr, typical for juvenile crust formation during the Grenville orogeny.