From Infogalactic: the planetary knowledge core
(Redirected from Samsara)
Jump to: navigation, search
"Sansara" redirects here. For the genus of moth, see Sansara (moth). For other uses, see Samsara (disambiguation). 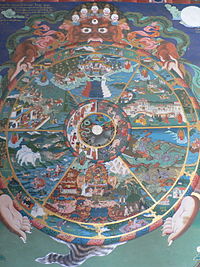 Traditional Tibetan thangka showing the bhavacakra and realms of saṃsāra

Saṃsāra (Sanskrit संसार) is the repeating cycle of birth, life and death (reincarnation) as well as one's actions and consequences in the past, present, and future in Hinduism, Buddhism, Bon, Jainism, Taoism,[1] and Sikhism.[citation needed]

According to these religions, a person's current life is only one of many lives that will be lived—stretching back before birth into past existences and reaching forward beyond death into future incarnations. During the course of each life, the quality of the actions (karma) performed determine the future destiny of each person. The Buddha taught that there is no beginning to this cycle but that it can be ended through perceiving reality. The goal of these religions is to realize this truth, the achievement of which (like ripening of a fruit) is moksha or nirvana (liberation).

Saṃsāra is a Sanskrit word, the literal meaning of which is "a wandering through" – in reference to the passage through many states of existence that is involved in the cycle of death and rebirth.

The historical origins of a concept of a cycle of repeated reincarnation are obscure but the idea appears frequently in religious and philosophical texts in both India and ancient Greece during the middle of the first millennium B.C.E.[2] Orphism, Platonism, Jainism and Buddhism all discuss the transmigration of beings from one life to another. The concept of reincarnation is present in the early Vedic texts such as the Rigveda but some scholars speculate it to have originated from the shramana traditions. Several scholars believe that reincarnation was adopted from this religious culture by the Historical Vedic religion and that Brahmins first wrote down scriptures containing these ideas in the early (Aitereya) Upanishads.[3][4][5][6][7][8]

The concept of samsara is closely associated with the belief that the person continues to be born and reborn in various realms in the form of a human, animal, or other being, depending on karma.[9]

In Hinduism, it is avidya, or ignorance, of one's true self that leads to ego-consciousness of the body and the phenomenal world. This grounds one in kāma (desire) and the perpetual chain of karma and reincarnation. Through egotism and desire one creates the causes for future becoming. The state of illusion that gives rise to this is known as maya.

Through ascetic practice one finally attains sanctity and liberation (moksha or mukti).[10]

Broadly speaking, the celibate holy life (brahmacarya) which leads to liberation is a path of self-purification by which the effects of negative karmas are avoided.

The Hindu Yoga traditions hold various beliefs. Moksha may be achieved by love of Ishwar/God (see bhakti movement, see Mirabai), by psycho-physical meditation (Raja Yoga), by discrimination of what is real and unreal through intense contemplation (Jnana Yoga), and through Karma Yoga, the path of selfless action that subverts the ego and enforces understanding of the unity of all.

The Rig Vedic, Yajur Vedic and Atharva Vedic Upanishads like Aiteraya Upanishad, Taittiriya Upanishad, Swetaswatara Upanishad, Mundaka Upanishad etc. contain the most ancient ideas on reincarnation of souls.[11][12][13] Hence, based on this, the earliest known texts to have spoken about karma, sansara, and moksha or mukti, are the Vedas and other Dharmic Texts. (Dharmic Texts stands for the Vedas, Ithihasas and Puranas). The Vedas describe karma as the result of enjoying the sensory pleasures of this material universe.[14]

In Jainism, Saṅsāra is the worldly life characterized by continuous rebirths and reincarnations in various realms of existence. Saṃsāra is described as mundane existence, full of suffering and misery and hence is considered undesirable and worth renunciation. The Samsāra is without any beginning and the soul finds itself in bondage with its karma since the beginningless time. Moksha is the only liberation from samsāra. Jainism maintains that one who accrues a significant amount of bad karma can also be reborn as a plant or even as a rock,[15] and similar concepts can be found in the Puranas, in the Bhagavad Gita, in the Manusmṛti[16] and in similar texts.

Within Buddhism, samsara is defined as the continual repetitive cycle of birth, death, and intermediate bardo state that arises from ordinary beings' generating and fixating on a mistaken concept of self and experiences. Samsara arises out of wrong knowledge about reality (avidya) and is characterized by dukkha (failure, suffering, anxiety, dissatisfaction). Buddhists believe that liberation from samsara is possible by following the Buddhist eight-fold path.

Generally, there are six realms of samsara. These include: gods, asuras, hungry ghosts, hell beings, animals, and humans.[17]

In Buddhism, according to the Pāḷi Canon, the five khandhas (aggregates), namely, matter, feeling, perception, mental formations and consciousness, do not survive the death of the body,[18][19] but due to the volitional actions of an evolving citta (mind),[20][21] a new personality in a new form is bound to arise somewhere within the totality of the 31 phenomenal worlds, which represent states of mental qualities and experiences or samsāra. According to Buddhism, the new being is never the former being; rather, the origination of renewed existence[22] is caused by the former being's taṇhā (thirst),[23] which is a factor[24] that leads a being to produce karma. However, the subject of experience, although completely altered in terms of the sensory aggregates, will be the one which is in the here and now, that is to say, the owner of mental, physical and verbal action.[25]

In Sikhism, it is thought that due to actions here and now and interactions with fellow humans, people obtain the chance of union with Akal. Through controlling the 5 thieves Kaam, Krodh, Moh, Lobh, and Hankaar, they are able to achieve the state of the Gurmukh or "God-willed", as opposed to Manmukh or "self-willed". Human life in Sikhism is deemed to be the highest form of life and the only form of life capable of being a Gurmukh.