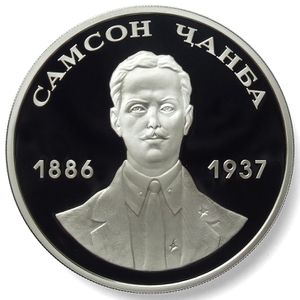 Chanba was born on 18 June 1886 in the village of Atara. He initially became a teacher. In 1919 he published the poem Daughter of the Mountains, and in 1920 the play Amkhadzyr, the first play written in the Abkhaz language.

After the October Revolution, Chanba joined politics. In 1921 Chanba joined the Communist Party and he became co-editor (with M. Khashba) of the newspaper Red Abkhazia and the People's Commissar for Education of the SSR Abkhazia. In 1925 Chanba became the Chairman of the Central Executive Committee of the SSR Abkhazia, and from 1930 to 1932 he returned to his position of People's Commissar for Education. From 1932 until 1937 Chanba was a fellow at the Abkhazian Institute for Language, Literature and History and from 1935 until 1937 Chairman of the Writers' Union of Abkhazia.

In 1937 Chanba was arrested and subsequently shot in Stalin's Great Purge.[1]