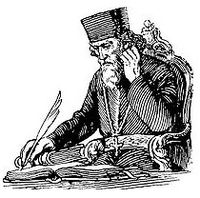 Samuil Micu Klein (September 1745 – 13 May 1806) was a Romanian Greek-Catholic theologian, historian, philologist and philosopher, a member of the Enlightenment-era movement of Transylvanian School (Şcoala Ardeleană).

Born as Maniu Micu in the Transylvanian village of Sadu, in the Austrian Empire (now in Sibiu County, Romania), he was the son of a Greek-Catholic protopope and the nephew of bishop Inocenţiu Micu-Klein.[1]

He began to study at the Seminary of Blaj and he joined the Order of Saint Basil in 1762. Micu received a scholarship in 1762 and began studying at the Catholic Pázmáneum University of Vienna. There is little known about his life in Vienna, but it is known he was attracted to science, studying experimental physics, mechanics and mathematics, in addition to theology and philosophy.[1]

In 1772, returning to Blaj to teach ethics and mathematics at the Seminary, Klein met and befriended bishop Grigorie Maior, whom he accompanied in visits throughout his diocese, trying to win converts to Greek-Catholicism. These trips proved to be useful in his study of the Romanian language, especially of the language spoken by the peasants, gathering materials for a future grammar. Klain was also interested in Romanian folklore, his writings being one of the earliest works on it.[2]

In 1774, he finished writing a work of history named De ortu progressu conversione valachorum episcopis item archiepiscopis et metropolitis eorum, which talked about the Roman origins of the Romanians and the origins of their faith in the Roman Christian Church in ancient Dacia. Apparently, his goal was to make the bishopric become a metropolis, so it would no longer belong to the Archdiocese of Esztergom.[3]

He went to Vienna in 1779 to become a prefect of studies at the Saint Barbara College, he published in 1780, together with Gheorghe Sincai the first Romanian grammar, Elementa linguae daco-romanae sive valachicae.[3]

Klein returned to Blaj, and between 1782 and 1804, he was very productive both in his translations and in writing original works:[4]

Klein moved to Buda in 1804 to become the editor at the University of Buda press for the Romanian-language books, hoping that this would allow him to publish his historical works, a project which did not become true because of his death just two years later.[5]