From Infogalactic: the planetary knowledge core
Jump to: navigation, search
This library serves the city of San Diego. For the library serving the county, see San Diego County Library.

The San Diego Public Library was established on May 19, 1882, by an elected board of library trustees, one of whom was civic leader and philanthropist George Marston. The first location was rented space in the Commercial Bank building at Fifth and G streets, and the new library opened its doors to the public for the first time on July 15, 1882. San Diego was the first city west of the Mississippi River to receive a Carnegie Library grant. The grant was received in 1899 and the library built in 1902. The library moved to Eighth and E streets where the new Carnegie Library was constructed.[1]

A notable librarian during this period was Clara Estelle Breed (1906-1994), who served as children's librarian at the downtown branch and was appointed City Librarian in 1945, a post she held for 25 years. She founded numerous branch libraries and established the Serra Cooperative Library System, which allows users to borrow books from other libraries in San Diego and Imperial counties. She maintained contact with many Japanese American children when they were interned with their families during World War II; her correspondence with those children is now on display at the Japanese American National Museum in Los Angeles.[2]

In 1952, the Carnegie Library was demolished and a new Central Library was opened at the same location on June 27, 1954. That library closed permanently on June 9, 2013, to begin the 10-week process of transferring its 2.6-million-item collection to the new library.[3] Over the years, many branch libraries have also been opened throughout the City. 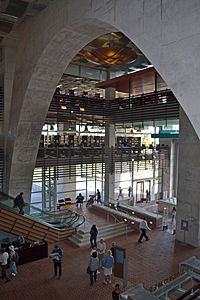 Lobby of the Central Library, which opened in 2013

In 2010, construction began on a new $185 million 366,673 square feet (34,065.0 m2)[4] Central Library at 330 Park Boulevard in downtown San Diego. This 9-story structure was designed by San Diego architect Rob Quigley. It is topped with an iconic steel-and-mesh lattice dome over a two-story reading room.[5] It opened on September 30, 2013.[3] The library displays numerous books and collections, including the second largest collection of baseball memorabilia in the U.S.[6]

The Central Library also houses a new charter high school, e3 Civic High School, which is billed as the only school in the United States to be housed within a library. The school is located on the sixth and seventh floors of the library and is visible to, but not accessible by, the public. The school will serve grades 9 through 12. It opened on September 3, 2013 with an initial student body of 260 ninth and tenth graders. Additional grades will be added in 2014 and 2015 with an eventual student body of 500.[7]

The San Diego Public Library system currently consists of the Central Library, 35 branch libraries, and an adult literacy program office (READ/San Diego). Library cards are free to applicants who reside within the state of California or own property in the city of San Diego, and to men and women serving in the armed forces who are stationed within San Diego County. Library cards are permanent and must be renewed every two years. There is a $30 annual fee for a non-resident library card.

In fiscal year 2006, the Library system had a circulation of more than 7 million and more than 6 million visits by patrons. [1] The San Diego Public Library was one of the first major library systems in the United States to offer free wireless Internet access at all of its locations, including the Central Library and branch libraries.

While testing the Spirit of St. Louis airplane in San Diego, Charles Lindbergh used the resources at the San Diego Public Library to plot the course for his historic solo flight across the Atlantic Ocean.[8]

Renowned American sculptor Donal Hord bequeathed to the San Diego Public Library his lifelong collection of books and several sculptures in appreciation for the assistance he had received from library's staff over the years.[9]

Aside from the Central Library, the system includes the following branches:[10]