Sandton is an affluent area situated within the metro of Johannesburg, Gauteng, South Africa. The name comes from the combination of two of its suburbs, Sandown and Bryanston.[2] In 1969 Sandton was promulgated as a municipality in its own right,[3] but lost its status as an independent town after the re-organisation of South African local governments.[4] 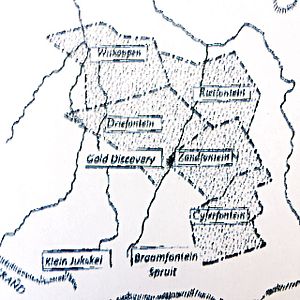 The three original farms, Zandfontein, Driefontein and Rietfontein, and later two additional farms, Witkoppen and Cyferfontein, upon which Sandton was founded.

Archaeological findings suggest the area, which Sandton comprises today, had originally been occupied by various indigenous groups, before European settlement, most notably the Tswana and, to a lesser extent, Sotho people. The remains of an Iron Age smelter was discovered in Lone Hill, a suburb of northern Sandton. One of the first Voortrekker parties to settle in the area were the Esterhuysen family on the farm Zandfontein (Afrikaans and Dutch for Sandy Spring or Sand Fountain). A monument to commemorate them may be found just off Adrienne Street in Sandown where the family cemetery is located. Zandfontein, Driefontein (Afrikaans and Dutch for Three Springs/Fountains) and Rietfontein (Afrikaans and Dutch for Reed Spring or Fountain of Reeds) encumbered what was to become Sandton. The municipal coat of arms of Sandton pays homage to the three farms with three round fountain barrels on its chevron.[5] In the late 1800s the Wilhelmi family of Hanover, Germany acquired the farm Driefontein No. 3 while Rietfontein was owned by the Ehler family. The original Driefontein homestead, now within the confines of the Field & Study Centre, was looted during the Anglo-Boer War. The ruins are visible on the northern bank of the Klein Jukskei River. The Wilhemi family, upon return from Germany built the 'new' 1906 Driefontein Farmhouse on what is present-day Fifteenth Street, Parkmore cum Riverclub. The farmhouse served as the icon and headquarters for the now defunct Sandton Historical Foundation and is listed as a City of Johannesburg Owned Heritage Site.

Sandton was established as a separate municipality in 1969 by the office of the Administrator of the Transvaal. It had formerly not formed part of Johannesburg but was managed, in part by the 'parent city' and Pretoria through the North Eastern Peri-Urban Land administration. Initially it was very much a residential area consisting mostly of small holdings with a rural "horsey" lifestyle attracting many of the upper-middle classes and Johannesburg Elites. It was subsequently dubbed the "mink and manure" belt. The Rivonia Trial derives it's name from the locality of Liliesleaf Farm within the Sandton suburb where many of the conspirators where captured by the South African State and subsequently tried for treason. Rivonia had previously been known as Edenburg and was changed to make itself distinct from Edenburg, Free State. It was named for the surname Riven. Sandton and its constituencies were traditionally relatively more liberal than surrounds. For example, the motion which never materialised by residents in favour for the inclusion of Alexandra, Gauteng then a demarcated black township in terms of the Group Areas Act, into Sandton's jurisdiction proved troublesome for the National Party Government whom had a stronghold in the adjacent town of Randburg.

The construction of Sandton City marked a significant change for the Sandton area. It ushered in rapid commercialisation and industrialisation. Sandton came to symbolise the White Flight movement of Johannesburg and secured itself as Johannesburg's second Central Business District. After the demise of Apartheid and the manifestation of the new political dispensation, Sandton initially formed part of the interim Eastern Metropolitan Substructure,[6] and in 1996 came to be included, along with the former towns of Randburg and Roodepoort, as part of the newly demarcated City of Johannesburg Metropolitan Municipality thus losing its separate municipal government and town status. Despite this, Sandton is still unofficially earmarked as a distinct region of the city and operates as a macro-suburb.

A lot of the "new money" has moved north to Sandton, including investment banks, financial consultants and the like. A considerable amount of the city's A-grade office space is to be found in Sandton. The JSE Securities Exchange, Johannesburg's stock exchange, relocated its offices to Sandton from the central business district in the late 1990s. Sandton's gain was the central business district's loss: it resulted from urban blight of the downtown Johannesburg area.

Sandton is home to the Sandton Convention Centre, one of the largest convention centres on the continent and primary site of the 2002 World Summit on Sustainable Development (also known as "Rio + 10"), which Johannesburg hosted. The convention centre also hosted the African National Congress' victory celebrations after the party won the 2004 elections.

Massmart has its head office in the Massmart House in Sandton.[7] Ster-Kinekor has its head office in the Ster-Kinekor Office Park in Eastgate, Sandton.[8] IBM's[9] and Hewlett Packard's main Southern Africa and South Africa offices are in Sandhurst and Rivonia respectively.[10][11] In 2013, petrochemical giant Sasol announced the development of their new headquarters in Wierda Valley, Sandton.[12][13]

The Sandton Central commercial node, centred on the suburbs of Sandown and Sandhurst has some of the best and most expensive commercial properties and offices in South Africa. A number of new developments are underway including 6 Benmore (Capital Hill),[14] Atrium on 5th, Alice Lane and Katherine and West which is situated directly opposite the Sandton Gautrain Station.[15][15][16] One of the highest rated Green buildings in South Africa, the Upper Grayston Office Park, is located in Sandton.[17]

Industrial areas within Sandton are Wynberg and Kramerville. Kramerville, once a run-down area, is now a trendy area and is the centre of the design and textiles industry in Sandton.[18] 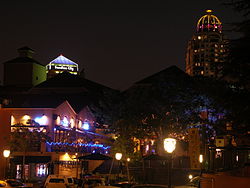 One of the main attractions in Sandton is Sandton City, which ranks among the largest shopping centres in Africa. Together with Nelson Mandela Square, the centre, with some 144,000 m2 of shopping space, is one of the largest in the Southern Hemisphere (behind Chadstone Shopping Centre).[19] Much of Johannesburg's business tourism is centred on Sandton, which has a string of 5-star hotels.

It was recently announced by Liberty Properties that Sandton City will receive a R1,77-billion upgrade. Liberty Properties chief executive Samuel Ogbu has envisaged the complex as South Africa's very own Wall Street "Africa is not for sissies, but we have a bold vision, which is to see the Sandton City precinct as our own Wall Street." The redevelopment will include the construction of a 60-storey office tower, a new hotel, new retail and office space and residential apartments. The 60-storey office tower will be the tallest building in Africa, replacing the Carlton Centre in Johannesburg CBD. The extension will stretch to 30 000 m2 and the total complex will have a gross lettable area of 158 000 m2 . London-based RTKL Associates have been chosen to design the complex.[20]

Nelson Mandela Square, formerly known as Sandton Square, was renamed in March 2004, after the unveiling of a 6-metre bronze statue of the former South African president. Perhaps ironically, Liliesleaf Farm, where Nelson Mandela lived in the early 1960s and where many leading political activists were arrested in 1963 and tried as part of the now infamous Rivonia Trial, is just north of Nelson Mandela Square, close to the N1 Highway, off Rivonia Road.

In 2007, CNBC Africa launched its headquarters for Africa, based in Sandton. From here the channel broadcasts to 41 countries on the continent with remote studios at the JSE and a fixed camera at the Nedbank head office, in Rivonia road. ABN Publishing officially announced the sixteenth local-language edition of Forbes magazine, Forbes Africa, in 2011, with offices in Sandton. The first Forbes Africa cover featured South African mining tycoon, Patrice Motsepe. Forbes Woman Africa and Forbes Life Africa followed in 2013.

In 2008, Sandton magazine was launched. The official slogan of the magazine is 'The Good Life in the Great North' and it strives to cater to the needs of the district’s top-end residential, tourist and business communities that drive the economic, social and retail pulse-point of the African continent. Sandton has a print run of 10 000 (including 5 000 copies hand-delivered to Sandton’s finest homes and apartments, with another 4 000 distributed to Sandton hotel rooms, services and businesses, with the balance sold nationally at select retail outlets).

The Sandton Convention Centre hosted the 2008 Miss World on 13 December 2008, as a replacement for Kiev, Ukraine.[21]

Sandton is often cited as a materialistic centre and refuge of the white flight from the Johannesburg CBD. Following the launch of Sandton Magazine, the town was satirized in a tongue-in-cheek satirical news story by Hayibo.com[22] that was also published on the Sandton Magazine website. The headline comically read "Sandton magazine hailed as just what rich whites need." There is reference to the requirement of two wealthy young white people on the cover "to help frightened Sandtonians forget about Alexandra township next door." The spoof also uses the magazine's marketing slogan when "four Mozambicans wandered into the ballroom apparently in search of the good life in the great north." These Mozambicans are "tazered," a reference to the advanced crime-fighting technology in the suburb. The materialism is heightened with imaginary article headline "Botox your Botox: why your face can never be paralysed enough." The fears of a Zuma presidency are reiterated "Ten Zuma-proof off-shore investments you can hide from the taxman." The high rates of white emigration and fears post-2010 are also satirized "Likewise, should we be looking at Perth or London post-2010?." Ultimately, security and material items are cited as the solution to any problem in the country "We want to remind people that there is no problem this country can throw at you that you can’t solve with electric fencing and a pedicure."[22]

Former Sandton resident and author, Sarah Britten cites the town regularly in her book The Art of the South African Insult. She cites the popularity that the town also holds with the growing black middle-class "Empowerment kugels don't hang out in Soweto; they do lunch in Sandton" and quotes columnist Therese Owen's advice to former TV-personality Kedibone, "Now that you're no longer wanted as a continuity presenter on SABC1, go hang out in Sandton and catch yourself a BEE boy." She also references a commentator on Moneyweb, "Sandton is attractive to the schmucks of this world—get over it—$s don't buy class."[citation needed]

The film Necktie Youth by Sibs Shongwe-La Mer follows the misadventures of a gaggle of teens from Sandton, in Johannesburg's northern suburbs (and the right side of the tracks). 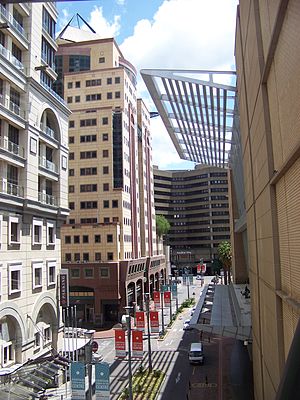 The Sandton area is one of the most opulent in Johannesburg and South Africa, and therefore in Africa.

Due to the shortage[dubious – discuss] of available land, the trend in new developments is to go skyward. This is evidenced by the new 140-metre-tall Michelangelo Towers, which purports to offer Manhattan-style living in Johannesburg.[23] The new apartment block will be the fourth-tallest building in Johannesburg and local newspaper the Sunday Times reports that the top-selling penthouse apartment was sold for R28 million (around $4 million).

Concerns have been raised as to whether Sandton has the necessary road and water infrastructure to sustain the massive development that is characteristic of Johannesburg in the 21st century (since the demise of Apartheid and the Group Areas Act).[citation needed]

By far the most prevalent form of public transportation in the area is provided by minibus taxis. The main taxi rank is to be found on West Street. Although not as popular an option as is the case in other major cities, metered taxis can be used to commute to and around Sandton.

Sandton houses the flagship station of the Gautrain rapid rail link. The station is located on the corner of West Street and Rivonia Road. The system has direct connections to OR Tambo International Airport and an inter-city commuter service from Pretoria through Rosebank to Park Station, Johannesburg.

The main campus of the Lycée Jules Verne, a French international school, is in Sandton.[27] Sandton used to be home of the former Bond University South Africa, Bond South Africa.