From Infogalactic: the planetary knowledge core
Jump to: navigation, search
This article is about the concept of Sangha in Buddhism. For other uses, see Sangha (disambiguation).
File:RatoMonks.jpg
Some of the monks outside the temple at the Tibetan Buddhist monastery, Rato Dratsang, in India, January 2015

Sangha (Pali: सङ्घ saṅgha; Sanskrit: संघ saṃgha; Chinese: 僧伽; pinyin: Sēngjiā[1]; Tibetan: དགེ་འདུན་ dge 'dun[2]) is a word in Pali and Sanskrit meaning "association", "assembly," "company" or "community" and most commonly refers in Buddhism to the monastic community of ordained Buddhist monks or nuns. This community is traditionally referred to as the bhikkhu-sangha or bhikkhuni-sangha. As a separate category, those who have attained any of the four stages of enlightenment, whether or not they are members of the bhikkhu-sangha or bhikkhuni-sangha, are referred to as the ariya-sangha or "noble Sangha".[3][4][5]

In a glossary of Buddhist terms,[9] Richard Robinson et al. define Sangha as:

“Sangha. Community. This word has two levels of meaning: (1) on the ideal (arya) level, it denotes all of the Buddha’s followers, lay or ordained, who have at least attained the level of srotapanna; (2) on the conventional (samvtri) level, it denotes the orders of the Bhiksus and Bhiksunis.”

Some lay practitioners in the West these days use the word "Sangha" as a collective term for all Buddhists, but the Pali Canon uses the word parisā (Sanskrit, parisad) for the larger Buddhist community — the monks, nuns, lay men, and lay women who have taken the Three Refuges — reserving ‘Sangha’ for a more restricted use.”[8][10][11]

“The two meanings overlap but are not necessarily identical. Some members of the ideal Sangha are not ordained; some monastics have yet to acquire the Dharma-eye”[10]

Qualities of the Sangha

The Sangha is the third of the Three Jewels in Buddhism. Due to the temptations and vicissitudes of life in the world, monastic life is considered to provide the safest and most suitable environment for advancing toward enlightenment and liberation.

In Buddhism, the Buddha, the Dharma and the Sangha each are described as having certain characteristics. These characteristics are chanted either on a daily basis and/or on Uposatha days, depending on the school of Buddhism. In Theravada tradition they are a part of daily chanting:

The Sangha: The Sangha of the Blessed One's disciples (Savakas) is:

That is, the four pairs of persons, the eight types of individuals - This Sangha of the Blessed One's disciples is: 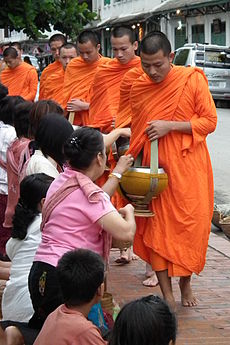 The Sangha of monks and the Sangha of nuns were originally established by Gautama Buddha in the 5th century BC in order to provide a means for those who wish to practice the Dhamma full-time, in a direct and highly disciplined way, free from the restrictions and responsibilities of the household life.[14] The Sangha also fulfils the function of preserving the Buddha’s original teachings and of providing spiritual support for the Buddhist lay-community. The monastic sangha has historically assumed responsibility for maintaining the integrity of the doctrine as well as the translation and propagation of the teachings of the Buddha.

The key feature of Buddhist monasticism is the adherence to the vinaya which contains an elaborate set of rules of conduct including complete chastity and eating only before noon. Between midday and the next day, a strict life of scripture study, chanting, meditation, and occasional cleaning forms most of the Sangha's duties [2]. Transgression of rules carries penalties ranging from confession to permanent expulsion from the Sangha. The founder of Japanese Tendai decided to reduce the number of rules down to about 60 (Enkai). In Kamakura Era, many sects (Zen, Pureland and Nichiren) that originated from Tendai sect abolished vinaya entirely.

Monks and nuns may own only the barest minimum of possessions due to their samaya as renunciates (ideally, three robes, an alms bowl, a cloth belt, a needle and thread, a razor for shaving the head, and a water filter). In practice, they often have a few additional personal possessions.

Traditionally, Buddhist monastics eschew ordinary clothes and wear robes. Originally the robes were sewn together from rags and stained with earth. The idea that robes were dyed with saffron seems unlikely to be true since it was and still is a very expensive commodity, and monks were poor. The color of modern robes varies from community to community (saffron is characteristic for southeast Asian Theravada and Mahayana groups, maroon in Tibet, gray in Korea, black in Japan etc.) 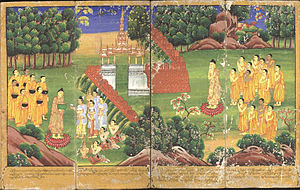 The word which is usually translated as monk is bhikkhu in Pali or bhikshu in Sanskrit. The feminine form is bhikkhuni or bhikshuni. These words literally mean "beggar", learner, auspicious, adept, endowed with harmony and order;[12] and it is traditional for bhikkhus to beg their food. In most places this has become an elaborate ritual, where lay people feed monastics in order to obtain merit which will ensure them a fortunate rebirth. Although monastics in India traditionally did not work for income, this changed when Buddhism moved to east Asia, so that in China and the surrounding countries monks often engage in agriculture.

The idea that all Buddhists, especially monks and nuns practice vegetarianism is a Western misperception. In some Sanskrit Mahayana Sutras meat eating is strongly discouraged. In Pali Canon the Buddha rejected a suggestion by Devadatta to impose vegetarianism on the Sangha. According to the Pali Texts, the Buddha ate meat [as long as the animal was not killed specifically for Him]. According to the Mahayana Sutras, the Buddha does not eat meat. The Buddha [in the Pali Texts] allowed Sangha members to eat whatever food is donated to them by laypeople, except that they may not eat meat if they know or suspect the animal was killed specifically for them. Consequently, the Theravadan tradition (Sri Lanka, Thailand, Laos, Cambodia and Burma) which follows the Pali scriptures does not practice vegetarianism though an individual may do so at his or her personal choice [3]. On the other hand, the Mahayana and Vajrayana traditions accept both Theravada and Mahayana scriptures, and consequently the practice will vary depending on their interpretation of the sutras. In particular, East Asian monastics take on the bodhisattva vows from the Brahma Net Sutra which has a vow of vegetarianism as part of the Triple Platform Ordination where they receive the sramanera/sramanerika, bhikshu/bhikshuni and bodhisattva vows, whereas the Tibetan lineages transmit the bodhisattva vows from Asanga's Yogacarabhumi, which does not include a vow of vegetarianism. In some areas such as China, Korea and Vietnam one expects the Sangha to practice strict vegetarianism while in other areas such as Japan or Tibet one does not.

The lay community is responsible for the production of goods and services in society, and for the production and raising of children. According to Mahayana sutras, the Buddha always maintained that lay persons were capable of great wisdom in the Buddhadharma and of reaching enlightenment. In the west, there is a misconception that Theravada regards enlightenment to be an impossible goal outside the Sangha. This is incorrect. In Theravada suttas, it is clearly recorded that the Buddha's uncle—who was a lay follower—reached enlightenment by hearing the Buddha's discourse.

The distinction between Sangha and lay persons has always been important and forms the Parisa, Buddhist community. Here, monastics teach and counsel the laity at request while laymen and laywomen offer donations for their future support. This inter-connectedness serves as a marriage and has sustained Buddhism to this day.

Women's role in the Sangha 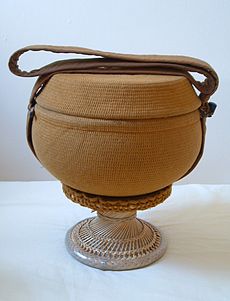 An almsbowl used by members of the Sangha.
Main article: bhikkhuni

Although always maintaining that women were just as capable of attaining enlightenment as men, the canonical texts depict the Buddha as being reluctant to permit women to join the Sangha. After several entreaties from his aunt and foster-mother, Maha Pajapati Gotami, who wished to become ordained, and from his cousin and aide Ananda, who supported her cause, the Buddha relented and ordained Maha Pajapati and several others as nuns. It is interesting to note that this was one of the few issues about which the Buddha is recorded to have changed his mind. The Buddha later established the condition that each new ordination would be sanctioned by at least five bhikkhunis.

There have been several theories regarding the Buddha's reluctance to ordain women, including the possibility that it was due to fears that a community of women would not be safe in the society of his day. According to the scriptures the reason the Buddha himself gave was that the admission of women would weaken the Sangha and shorten its lifetime, and he laid down strict rules subordinating nuns to monks (The Eight Garudhammas).

Before the modern era, the Bhikkhuni Sangha spread to most Buddhist countries including Burma (also known as Myanmar), with the notable exceptions being Tibet and Thailand. However, in Sri Lanka, it died out in the 11th century during a civil war and was not revived. Consequently, as Theravada Buddhism spread to Thailand, the Theravada Sangha consisted only of monks.

In recent decades, there has been a serious attempt to revive the Theravada Bhikkhuni Sangha with the assistance of Mahayana bhikkhunis from the Chinese lineage. These were introduced from Sri Lanka in 433 C. E., following the Dharmaguptaka Vinaya, and subsequently spread to Korea, Taiwan, Vietnam, and Japan. This has resulted in a small but thriving community of nuns in Sri Lanka, who in turn ordained the first Theravada Buddhist nun in the history of Thailand, Ven. Dhammananda. However, the validity of these ordinations is strongly disputed by some of the conservative Theravada establishment.

Meanwhile, a similar process has produced the first fully ordained bhikkhunis in Tibetan Buddhism, where only the novice ordination for bhikkhunis existed. In the west, where feminism has been a strong influence, there have been many remarkable Buddhist nuns: three notable examples are Pema Chodron, Ayya Khema and Tenzin Palmo.

The first bhikkhuni ordination in Australia in the Theravadin tradition was held in Perth on October 22, 2009 at Bodhinyana Monastery. Venerable Ajahn Vayama together with Venerables Nirodha, Seri and Hasapanna were ordained as bhikkhunis by a dual sangha act of bhikkhus and bhikkhunis in full accordance with the pali vinaya.

Sangha as a general reference to Buddhist community 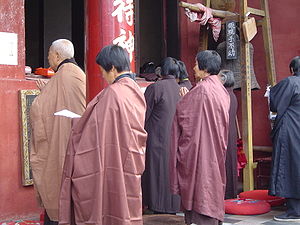 Some scholars noted that sangha is frequently (and according to them, mistakenly) used in the West to refer to any sort of Buddhist community.[15] The terms parisa and gana are suggested as being more appropriate references to a community of Buddhists. Parisa means "following" and it refers to the four groups of the Buddha's followers: monks, nuns, laymen and laywomen.[16] The Sanskrit term gana has meanings of flock, troop, multitude, number, tribe, series, class, and is usable as well in more mundane senses.[citation needed]

The Buddhist-derived new religious movement, Soka Gakkai, which began as a lay organization associated with Nichiren Buddhism in Japan, disputes the traditional definition of sangha. They interpret the meaning of the Three Jewels of Buddhism, in particular the "treasure of the Sangha"—which they refer to in English as "Samgha"—includes not only the monastic community, but also lay persons that practice Buddhism correctly.[17][18]