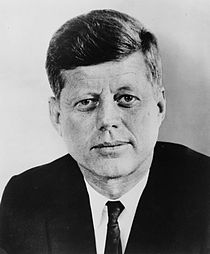 U.S. President John F. Kennedy was predicted to "experience great danger because of his sanpaku condition". In both eyes, the sclera is visible at the bottom.

Sanpaku gan (三白眼?) or Sanpaku (三白?) is a Japanese term meaning “three whites,” which originated from a Chinese term[citation needed]. It is generally referred to in English as "sanpaku eyes" and refers to eyes in which the white space above or below the iris is visible.

According to Chinese medical face reading, when the white part of the eye, known as the sclera, is visible beneath the iris, it represents physical imbalance in the body and is claimed to be present in alcoholics, drug addicts and people who over-consume sugar or grain. Conversely, when the upper sclera is visible it is said to be an indication of mental imbalance in people such as psychotics, murderers, and anyone rageful. Stress and fatigue may also be a cause.[1] In either condition, it is believed that these people attract accidents and violence.

In 1965 Ohsawa, assisted by William Dufty, wrote You Are All Sanpaku which gave this perspective on the condition:

For thousands of years, people of the Far East have been looking into each other's eyes for signs of this dreaded condition. Any sign of sanpaku meant that a man's entire system — physical, physiological and spiritual — was out of balance. He had committed sins against the order of the universe and he was therefore sick, unhappy, insane, what the West has come to call "accident prone". The condition of sanpaku is a warning, a sign from nature, that one's life is threatened by an early and tragic end.[4]

John Lennon mentioned sanpaku in his song "Aisumasen (I'm Sorry)" from the 1973 Mind Games album. It is also briefly referenced in William Gibson's Neuromancer, as well as in Michael Franks' 1979 song "Sanpaku". The Firesign Theatre's piece "Temporarily Humboldt County" mentions a character named "Sam Paku". Ken Kesey also references 'sanpaku' in the short story 'Now We Know How Many Holes It Takes To Fill The Albert Hall' which can be found in Demon Box (Methuen, 1986 p 297).