The Basilica of Saint Sabina (Latin: Basilica Sanctae Sabinae, Italian: Basilica di Santa Sabina all'Aventino) is a historical church on the Aventine Hill in Rome, Italy. It is a titular minor basilica and mother church of the Roman Catholic Order of Preachers, better known as the Dominicans. Santa Sabina is perched high above the Tiber river to the north and the Circus Maximus to the east. It is next to small public park Giardino degli Aranci (Garden of Oranges), which has a scenic terrace overlooking Rome. It is a short distance to the headquarters of the Knights of Malta.

Santa Sabina is the oldest extant Roman basilica in Rome that preserves its original colonnaded rectangular plan and architectural style. Its decorations have been restored to their original restrained design. Other basilicas, such as Santa Maria Maggiore, are often heavily and gaudily decorated. Because of its simplicity, the Santa Sabina represents the crossover from a roofed Roman forum to the churches of Christendom. Its Cardinal Priest is Jozef Tomko. It is the stational church for Ash Wednesday. 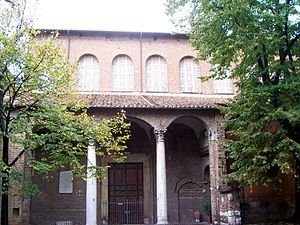 Santa Sabina was built by Peter of Illyria, a Dalmatian priest, between 422 and 432[1] near a temple of Juno on the Aventine Hill in Rome. The church was built on the site of early Imperial houses one of which is said to be of Sabina a Roman matron originally from Avezzano in the Abruzzo region of Italy. Sabina was beheaded under the Emperor Vespasian, or perhaps Hadrian, because she had been converted to Christianity by her servant Seraphia, who was stoned to death. She was later declared a Christian Saint.

In the 9th century, it was enclosed in a fortification area. The interior was largely renovated by Domenico Fontana in 1587 and by Francesco Borromini in 1643. Italian architect and art historian Antonio Muñoz restored the original medieval appearance of the church (which had served as a lazaretto since 1870). The bell tower was built in the 10th century and remade in the Baroque period.

The church was the seat of a conclave in 1287, although the prelates left the church after a plague had killed six of them. They returned in the church only on 1288 February, electing Nicholas IV as pope.[2]

The exterior of the church, with its large windows made of selenite, not glass, looks much as it did when it was built in the 5th century.

The wooden door of the basilica is generally agreed to be the original door from 430-32, although it was apparently not constructed for this doorway. Eighteen of its wooden panels survive — all but one depicting scenes from the Bible. Most famous among these is one of the earliest certain depictions of Christ's crucifixion, although other panels have also been the subjects of extensive analysis because of their importance for the study of Christian iconography.

Above the doorway, the interior preserves an original dedication in Latin hexameters.

The campanile (bell tower) dates from the 10th century. 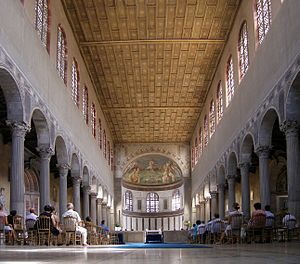 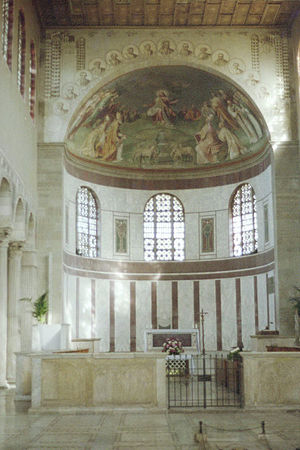 The original 5th-century apse mosaic was replaced in 1559 by a very similar fresco by Taddeo Zuccari. The composition probably remained unchanged: Christ is flanked by a good thief and a bad thief, seated on a hill while lambs drink from a stream at its base. The iconography of the mosaic was very similar to another 5th-century mosaic, destroyed in the 17th century, in Sant'Andrea in Catabarbara. An interesting feature of the interior is a framed hole in the floor, exposing a Roman era temple column that pre-dates Santa Sabina. This appears to be the remnant of the Temple of Juno erected on the hilltop site during Roman times, which was likely razed to allow construction of the basilica. The tall, spacious nave has 24 columns of Proconnesian marble with perfectly matched Corinthian capitels and bases, which were reused from the Temple of Juno.

The interior cells of the Dominican convent are little changed since the earliest days of the Order of Preachers. The cell of St. Dominic is still identified, though it has since been enlarged and converted to a chapel. Also, the original dining room still remains, in which St. Thomas Aquinas would dine when he lived to Rome.

Convent and Studium of the Dominican Order

Saint Dominic, Pope Saint Pius V, Blessed Ceslaus, Saint Hyacinth and St Thomas Aquinas are among those who have lived in the convent adjacent to the basilica of Santa Sabina.

In 1265 in accordance with the injunction of the Chapter of the Roman province of the Order of Preachers at Anagni, Thomas Aquinas was assigned as regent master at the studium conventuale at Santa Sabina: “Fr. Thome de Aquino iniungimus in remissionem peccatorum quod teneat studium Rome, et volumus quod fratribus qui stant secum ad studendum provideatur in necessariis vestimentis a conventibus de quorum predicatione traxerunt originem. Si autem illi studentes inventi fuerint negligentes in studio, damus potestatem fr. Thome quod ad conventus suos possit eos remittere”.[8] At this time the existing studium conventuale at Santa Sabina was transformed into the Order's first studium provinciale, an intermediate school between the studium conventuale and the studium generale. "Prior to this time the Roman Province had offered no specialized education of any sort, no arts, no philosophy; only simple convent schools, with their basic courses in theology for resident friars, were functioning in Tuscany and the meridionale during the first several decades of the order's life. But the new studium at Santa Sabina was to be a school for the province," a studium provinciale.[9] Tolomeo da Lucca, an associate and early biographer of Aquinas, tells us that at the Santa Sabina studium Aquinas taught the full range of philosophical subjects, both moral and natural.[10]

With the departure of Aquinas for Paris in 1268 and the passage of time the pedagogical activities of the studium provinciale at Santa Sabina were divided between two campuses. A new convent of the Order at the Church of Santa Maria sopra Minerva had a modest beginning in 1255 as a community for women converts, but grew rapidly in size and importance after being given to the Dominicans in 1275.[11] In 1288 the theology component of the provincial curriculum was relocated from the Santa Sabina studium provinciale to the studium conventuale at Santa Maria sopra Minerva which was redesignated as a studium particularis theologiae.[12] Thus, the studium at Santa Sabina was the forerunner of the studium generale at Santa Maria sopra Minerva. The latter would be transformed in the 16th century into the College of Saint Thomas (Latin: Collegium Divi Thomæ), and then in the 20th century into the Pontifical University of Saint Thomas Aquinas, Angelicum sited at the convent of Saints Dominic and Sixtus. 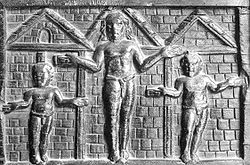 Following the curriculum of studies laid out in the capitular acts of 1291 the Santa Sabina studium was redesignated as one of three studia nove logice intended to offer courses of advanced logic covering the logica nova, the Aristotelian texts recovered in the West only in the second half of the 12th century, the Topics, Sophistical Refutations, and the Prior and Second Analytics of Aristotle. This was an advance over the logica antiqua, which treated the Isagoge of Porphyry, Divisions and Topics of Boethius, the Categories and On Interpretation of Aristotle, and the Summule logicales of Peter of Spain.[13] Milone da Velletri was lector at the Santa Sabina studium in 1293[14] In 1310 the Florentine Giovanni dei Tornaquinci was lector at Santa Sabina.[15] In 1331 at the Santa Sabina studium Nerius de Tertia was lector,[16] and Giovanni Zocco da Spoleto was a student of logic.[17]