Santiago Ramón y Cajal [1] (Spanish: [sanˈtjaɣo raˈmon i kaˈxal]; 1 May 1852 – 17 October 1934)[2] was a Spanish pathologist, histologist, neuroscientist, and Nobel laureate. His original pioneering investigations of the microscopic structure of the brain have led to his being designated by many as the father of modern neuroscience. His medical artistry was legendary, and hundreds of his drawings illustrating the delicate arborizations of brain cells are still in use for educational and training purposes.[3]

As a child Ramón y Cajal was transferred many times from one school to another because of behavior that was declared poor, rebellious, and showing an anti-authoritarian attitude. An extreme example of his precociousness and rebelliousness is his imprisonment at the age of eleven for destroying his neighbor's yard gate with a homemade cannon.[4]

He was an avid painter, artist, and gymnast, but his father neither appreciated nor encouraged these abilities, even though these artistic talents would contribute to his success later in life. In order to tame the unruly character of his son, his father apprenticed him to a shoemaker and barber. "To try and give his son much-needed discipline and stability, Don Justo apprenticed him out to a barber".[5] He was well known for his pugnacious attitude as he worked.[citation needed]

Over the summer of 1868, Ramón y Cajal's father, hoping to interest his son in a medical career, took him to graveyards to find human remains for anatomical study. Sketching bones was a turning point for him and subsequently, he did pursue studies in medicine.[6]:207

Ramón y Cajal attended the medical school of the University of Zaragoza, where his father was an anatomy teacher. He graduated in 1873.[2] After a competitive examination, he served as a medical officer in the Spanish Army. He took part in an expedition to Cuba in 1874-75, where he contracted malaria and tuberculosis.[2] In order to cure these conditions, he attended the Panticosa spa-town in the Pyrenees.[citation needed]

After returning to Spain he married Silveria Fañanás García in 1879, with whom he had four daughters and three sons.[2] In 1877, he received his doctorate in medicine in Madrid and was awarded the position of anatomy professor of the University of Valencia in 1883.[2] He later held professorships in both Barcelona (1887) and Madrid (1892).[2] He was also the director of the Zaragoza Museum (1879), director of the Instituto Nacional de Higiene - translated as National Institute of Hygiene - (1899), and founder of the Laboratorio de Investigaciones Biológicas - translated as the Laboratory of Biological Investigations - (1922), later renamed to the Instituto Cajal, or Cajal Institute.[2] He died in Madrid in 1934, at the age of 82, continuing to work even on his deathbed.[2][7]

On his political and religious views, it was first said that he "was a liberal in politics, an evolutionist in philosophy, an agnostic in religion".[8][9] Nonetheless, he later regretted having left religion,[10] and ultimately, he became convinced of a belief in God as a creator, as stated during his first lecture before the Spanish Royal Academy of Sciences.[11][12] He joined a Masonic lodge in 1877.[13] 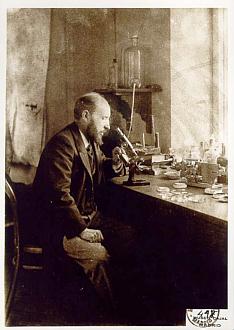 Ramón y Cajal in his laboratory

Ramón y Cajal's early work was accomplished at the University of Zaragoza and the University of Valencia, where he focused on the pathology of inflammation, the microbiology of cholera, and the structure of epithelial cells and tissues. It was not until he moved to the University of Barcelona in 1887 that he learned about Golgi's method, which uses potassium dichromate and silver nitrate to (randomly) stain a few neurons a dark black color, while leaving the surrounding cells transparent. This staining method, which Ramón y Cajal improved, was central to his work, allowing him to turn his attention to the central nervous system, in which neurons are so densely intertwined that standard microscopic inspection would be nearly impossible. During this period he made extensive studies of neural material, covering many species and most major regions of the brain, leaving behind a legacy of detailed drawings.

Ramón y Cajal made several major contributions to neuroanatomy.[6] He discovered the axonal growth cone, and demonstrated experimentally that the relationship between nerve cells was not continuous, but contiguous.[6] This provided definitive evidence for what would later be known as "neuron doctrine", now widely considered the foundation of modern neuroscience.[6] In debating neural network theories (e.g. neuron theory, reticular theory), Ramón y Cajal was a fierce defender of the neuron theory.

He provided detailed descriptions of cell types associated with neural structures, and produced excellent depictions of structures and their connectivity.

He was an advocate of the existence of dendritic spines, although he did not recognize them as the site of contact from presynaptic cells. He was a proponent of polarization of nerve cell function and his student, Rafael Lorente de Nó, would continue this study of input-output systems into cable theory and some of the earliest circuit analysis of neural structures.

He discovered a new type of cell, which was subsequently named after him: the interstitial cell of Cajal (ICC).[14] This cell is found interleaved among neurons embedded within the smooth muscles lining the gut, serving as the generator and pacemaker of the slow waves of contraction that move material along the gastrointestinal tract, mediating neurotransmission from motor neurons to smooth muscle cells.

In his 1894 Croonian Lecture, Ramón y Cajal suggested (in an extended metaphor) that cortical pyramidal cells may become more elaborate with time, as a tree grows and extends its branches. He also devoted a considerable amount of time studying hypnosis (which he used to help his wife with labor) and parapsychological phenomena. A book he had written on these topics was lost during the Spanish Civil War.

Ramón y Cajal's efforts to improve the state of scientific research and education in Spain were part of a broader preoccupation with Regenerationism among Spanish intellectuals. 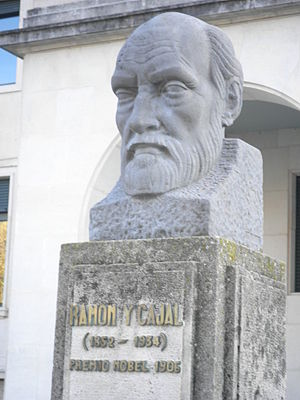 Ramón y Cajal received many prizes, distinctions, and societal memberships during his scientific career, including honorary doctorates in medicine from the Cambridge University and Würzburg University and an honorary doctorate in philosophy from Clark University.[2] The most famous distinction he was awarded was the Nobel Prize in Physiology or Medicine in 1906, together with the Italian scientist Camillo Golgi "in recognition of their work on the structure of the nervous system".[2] This caused some controversy because Golgi, a staunch supporter of reticular theory, disagreed with Ramón y Cajal in his view of the neuron doctrine.

The asteroid 117413 Ramonycajal is named in his honor. Spanish public television filmed a biopic series to commemorate his life.

He published more than 100 scientific works and articles in French, Spanish, and German. Among his most notable works were:[2]