The Sapienza University of Rome (Italian: Sapienza – Università di Roma), also called simply Sapienza[4][lower-alpha 1] or the University of Rome, is a research university that is located in Rome, Italy. Formally known as Università degli Studi di Roma "La Sapienza", it is one of the largest European universities by enrollments[5] and one of the oldest in history, founded in 1303. The University is one of the most prestigious Italian universities and in the world, commonly ranking first in national rankings and in Southern Europe.[6] In 2018, 2019 and 2021 it ranked first in the world for classics and ancient history.[7][8]

Most of the Italian ruling class studied at Sapienza.[9] Sapienza educated numerous notable alumni, including many Nobel laureates, Presidents of the European Parliament and European Commissioners, heads of several nations, notable religious figures, scientists and astronauts.[10] In September 2018, it was included in the top 100 of the QS World University Rankings Graduate Employability Ranking.[11] 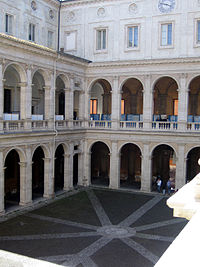 Sapienza University of Rome was founded in 1303 with the Papal bull In Supremae praeminentia Dignitatis, issued on 20 April 1303 by Pope Boniface VIII, as a Studium for ecclesiastical studies more under his control than the universities of Bologna and Padua,[12] making it the first pontifical university.

In 1431 Pope Eugene IV completely reorganized the studium with the bull In supremae, in which he granted masters and students alike the broadest possible privileges and decreed that the university should include the four schools of Law, Medicine, Philosophy and Theology. He introduced a new tax on wine to raise funds for the university; the money was used to buy a palace which later housed the Sant'Ivo alla Sapienza church.

However, the University's days of splendour came to an end during the sack of Rome in 1527, when the studium was closed and the professors dispersed, and some were killed. Pope Paul III restored the university shortly after his ascension to the pontificate in 1534.

In the 1650s the university became known as Sapienza, meaning wisdom, a title it retains. In 1703, Pope Clement XI purchased some land with his private funds on the Janiculum, where he made a botanical garden, which soon became the most celebrated in Europe through the labours of the Trionfetti brothers. The first complete history of the Sapienza University was written in 1803–1806 by Filippo Maria Renazzi.[13]

University students were newly animated during the 19th-century Italian revival. In 1870, La Sapienza stopped being the papal university and became the university of the capital of Italy. In 1935 the new university campus, planned by Marcello Piacentini, was completed.

On 15 January 2008 the Vatican cancelled a planned visit to La Sapienza University by Pope Benedict XVI who was to speak at the university ceremony launching the 2008 academic year[14] due to protests by some students and professors.[15] The title of the speech would have been 'The Truth Makes Us Good and Goodness is Truth'.[16] Some students and professors protested in reaction to a 1990 speech that Pope Benedict XVI (then Cardinal Joseph Ratzinger) gave in which he, in their opinion, endorsed the actions of the church against Galileo in 1633.[14]

The new campus of Rome University, built in 1935 by Marcello Piacentini, in a 1938 picture.

Sapienza University has many campuses in Rome, but its main campus is the Città Universitaria (University city), which covers 44 ha (110 acres) near the Roma Tiburtina Station. The university has satellite campuses outside Rome, the main one of which is in Latina.

In 2011 a project was launched to build a campus with residence halls near Pietralata station, in collaboration with the Lazio region.[17] To cope with the ever-increasing number of applicants, the Rector also approved a new plan to expand the Città Universitaria, reallocate offices and enlarge faculties, as well as create new campuses for hosting local and foreign students.

The Alessandrina University Library[18] (Biblioteca Universitaria Alessandrina), built in 1667 by Pope Alexander VII, is the main library housing 1.5 million volumes; it has some important collections including collezione ciceroniana and Fondo Festa.

Since the 2011 reform, Sapienza University of Rome has eleven faculties and 65 departments. Today Sapienza, with 140,000 students and 8,000 among academic and technical and administrative staff, is the largest university in Italy. The university has significant research programmes in the fields of engineering, natural sciences, biomedical sciences and humanities. It offers 10 Masters Programmes taught entirely in English.

In 2018, the subject Classics and Ancient history of Sapienza is ranked the 1st in the world by QS World University Rankings by subject.[22] As the same ranking, the subject Archaeology ranks the 9th.[23]

According to the QS Graduate Employability Ranking 2020, Sapienza places first amongst Italian universities for the indicator on Alumni Outcomes thanks to the number of university graduates employed in large companies and in managerial positions.[25]

To cope with the large demand for admission to the university courses, some faculties hold a series of entrance examinations. The entrance test often decides which candidates will have access to the undergraduate course. For some faculties, the entrance test is only a mean through which the administration acknowledges the students' level of preparation. Students that do not pass the test can still enroll in their chosen degree courses but have to pass an additional exam during their first year.

Some of the notable alumni and professors