From Infogalactic: the planetary knowledge core
Jump to: navigation, search
For other uses, see Velaro.

Not to be confused with the cancelled Sokol train project. 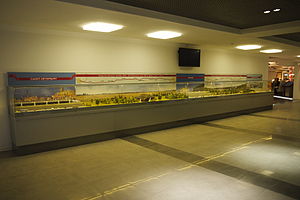 OO gauge model railway featuring the Sapsan train on the Moscow – Saint Petersburg Railway and Moscow to Nizhny Novgorod Railway in the Museum of the Moscow Railway, Moscow

Development and construction was carried out by Siemens at Erlangen and Krefeld in Germany. In August 2009, it was announced that the fifth Sapsan had been delivered to Russia, of the eight that were planned.[5]

On December 19, 2011, a €600 million order for an additional 20 trainsets including 8 EVS2 sets[8] was signed in order to facilitate an increased number of services on existing lines and the expansion of new service elsewhere in the system.[9][10] The second-batch EVS1 sets (trainsets 9-20) will be same details as the first-batch EVS1 sets, but the second-batch EVS2 sets (trainsets 21 onward) will have retractable steps to suit for low platforms, unlike the first-batch EVS2 sets.

Since entering service in December 2009, it has been Russian Railways' only profitable passenger service, with an occupancy rate of 84.5%.[11] According to the timetable valid from 30 October 2011, the direct train from Moscow to St Petersburg without intermediate stops needs 3:40, the train from Moscow to Nizhniy Novgorod 3:55 hours.

There were a series of stone throwing attacks against Sapsan trains. Possible reasons including cancelling of commuter trains, disruption of local transportation in rural areas, and accidents because of poor safety for pedestrians have been suggested.[12] New bridge crossings were built, platforms along the railway were reconstructed and additional track was completed in 2015. New Lastochka commuter trains were introduced on the Moscow-Tver[13] and St.Petersburg-Bologoye routes. Local trains in the rural areas were saved.[14][15] 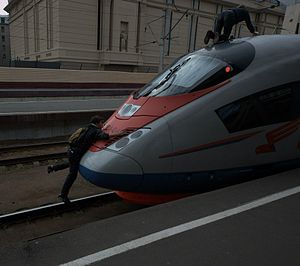 The first and the only(since 2015) route for Sapsan trains.

There are no Sapsan trains stopping at all stations on the route. The fastest ones do not stop between Moscow and Saint Petersburg at all. Numbers of the trains which stop at intermediate stations are listed above. Such measures were implemented for speed increasing.

Former route of Sapsan trains. Since 2015, new Talgo "Strizh" train was introduced. All the Sapsans were directed to Moscow - St.Petersburg route. Talgo trains are also high speed but more suitable for this route.[17] 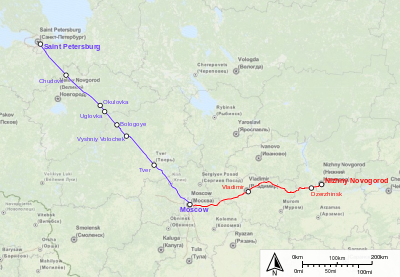 On July 1, 2012, the company "Russian Railways" introduced a new tariff system for Sapsan trains which dynamically prices tickets based on two factors:

The new rates range from 0.8 to 1.2 times the base rate for the day. It is possible to see the final price of a ticket for a specific date during the booking process.