Saraiki (Shahmukhi: سرائیکی), is the southern dialect of Western Punjabi of the Indo-Aryan language family. It is spoken by 20 million people (2013)[4] across the South Punjab, southern Khyber Pakhtunkhwa, and border regions of North Sindh and Eastern Balochistan, with some 70,000 migrants and their descendants in India,[1] who migrated as a result of the partition of British India, as well as overseas, especially in the Middle East. Saraiki is also spoken by some Hindus in Afghanistan, though the number there is unknown.[5]

It follows the standardized Punjabi Shahmukhi script for writing.[6][7] The name "Saraiki" (or variant spellings) was formally adopted in the 1960s by regional social and political leaders who undertook to promote Saraiki dialects of the Punjabi language.[citation needed]

The word sarāiki likely originated from sauvīrā, or Sauvira,[8] a kingdom name in ancient India which was also mentioned in the Sanskrit epic Mahabharata. By adding adjectival suffix -kī to the word sauvīrā it became sauvīrakī. The consonant v with its neighboring vowels was dropped for simplification and hence the name became sarāiki. Although George Abraham Grierson reported that sirāiki (that was the spelling he used) is from a Sindhi word sirō, meaning "of the north, northern", Shackle[9]:388 asserts that this etymology is unverified. Another view is that sarāiki originates from the word sarai.

The most common rendering of the name is Saraiki. However, Seraiki and Siraiki have also been used in academia until recently. Precise spelling aside, the name was adopted in the 1960s by regional social and political leaders. An organization named Saraiki Academy was founded in Multan on 6 April 1962 and gave the name of universal application to the dialect.[9] Currently, Saraiki is the spelling used in universities of Pakistan (the Islamia University of Bahawalpur, department of Saraiki established in 1989,[10] Bahauddin Zakariya University, in Multan, department of Saraiki established in 2006,[11] and Allama Iqbal Open University, in Islamabad, department of Pakistani languages established in 1998),[12] and by the district governments of Bahawalpur[13] and Multan,[14] as well as by the federal institutions of the Government of Pakistan like Population Census Organization[15] and Pakistan Broadcasting Corporation.[16] 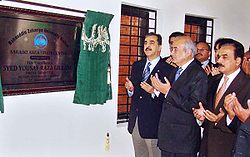 Saraiki is a member of the Indo-Aryan subdivision of the Indo-Iranian branch of the Indo-European language family. Standard Punjabi and Saraiki (South Punjabi) are mutually intelligible; they slightly differ in consonant inventory and in the structure of the verb. Saraiki is about 80% intelligible with Dogri.[citation needed]

In 1919, Grierson maintained that the dialects of what is now the southwest of Punjab Province in Pakistan constitute a dialect cluster, which he designated "Southern Lahnda" within a putative "Lahnda language". Subsequent Indo-Aryanist linguists have confirmed the reality of this dialect cluster, even while rejecting the name "Southern Lahnda" along with the entity "Lahnda" itself.[17]:18–20 Grierson also maintained that "Lahnda" was his novel designation for various dialects up to then called "Western Punjabi", spoken north, west, and south of Lahore. The local dialect of Lahore is the Majhi dialect of Punjabi, which has long been the basis of standard literary Punjabi.[18] However, outside of Indo-Aryanist circles, the concept of "Lahnda" is still found in compilations of the world's languages (e.g. Ethnologue).

The historical inventory of names for the dialects now called Saraiki is a confusion of overlapping or conflicting ethnic, local, and regional designations. "Hindki" and "Hindko" – which means merely "of India" – refer to various Saraiki and even non-Saraiki dialects in Punjab Province and farther north within the country, due to the fact they were applied by arrivals from Afghanistan.[citation needed] One historical name for Saraiki, Jaṭki, means "of the Jaṭṭs", a northern South Asian ethnic group; but Jaṭṭs speak the Indo-Aryan dialect of whatever region they live in.[citation needed] Only a small minority of Saraiki speakers are Jaṭṭs, and not all Saraiki speaking Jaṭṭs necessarily speak the same dialect of Saraiki. However, these people usually call their traditions as well as language as Jataki. Conversely, several Saraiki dialects have multiple names corresponding to different locales or demographic groups. When consulting sources before 2000, it is important to know that Pakistani administrative boundaries have been altered frequently. Provinces in Pakistan are divided into districts, and sources on "Saraiki" often describe the territory of a dialect or dialect group according to the districts. Since the founding of Pakistan in 1947, several of these districts have been subdivided, some multiple times.[citation needed] Until 2001, the territorial structure of Pakistan included a layer of divisions between a province and it's districts. The name dialect name "Ḍerawali" is used to refer to the local dialects of both Dera Ghazi Khan and Dera Ismail Khan, but "Ḍerawali" in the former is the Multani dialect and "Ḍerawali" in the latter is the Thaḷi dialect.[17]:Appendix I:220–245[18]:239ff

Status of language or dialect

Since Sindhi, Punjabi, Urdu and Hindi are spoken in a region that has witnessed significant ethnic and identity conflict, all have been exposed to the dialect versus language question. Each of these languages possesses a central standard on which its literature is based, and from which there are multiple dialectal variations.[19]

According to some, Saraiki is a separate language with its own standard as opposed to a dialect of Punjabi.[20] The development of the standard written language began after the founding of Pakistan in 1947, driven by a regionalist political movement.[9][21]:838 The national census of Pakistan has tabulated the prevalence of Saraiki speakers since 1981.[22]:46

On the other hand, Saraiki can be considered a dialect of Punjabi, because Saraiki is mutually intelligible with and morphologically and syntactically similar to standard Punjabi agreed by majority of local linguists such as Dulai, K Narinder, Gill, Harjeet Singh Gill, A Henry. Gleason (Jr), Koul, N Omkar, Siya Madhu Bala, Afzal Ahmed Cheema, Aamir Malik, Amar Nath [23][24][25][26] as well as modern linguistics publications such as US National advisory Committee based The UCLA Language Materials Project (LMP) along with modern linguistics such as Lambert M Surhone, Mariam T Tennoe, Susan F Henssonow, Cardona and Nataliia Ivanovna Tolstaia classifing Saraiki as a dialect of Punjabi.[27][28][29][30]

In Sindh province (Pakistan) it is considered a dialect of Sindhi spoken in the ten northern districts of the province. There is also a debate about it being the earliest form of the Urdu language after the first Muslim ruler in (historical) India and made Multan the capital of Sindh.[31]

The first national census of Pakistan to gather data on the prevalence of Saraiki was the census of 1981.[22] In that year, the percentage of respondents nationwide reporting Saraiki as their native language was 9.83. In the census of 1998, it was 10.53 out of a national population of 132 million, for a figure of 13.9 million Saraiki speakers resident in Pakistan. Also according to the 1998 census, 12.8 million of those, or 92%, lived in the province of Punjab.[32] Following is the distribution of Saraiki in the four provinces of Pakistan:

According to the Indian national census of 2001, Saraiki is spoken in urban areas throughout northwest and north central India by a total of about 70,000 people, mainly by the descendants of migrants from western Punjab after the independence of Pakistan in 1947. Some of these speakers are settled in Andhra Pradesh who went and settled there before the independence because of their pastoral and nomadic way of life, and these are Muslims.[33] Out of these total speakers of the language, 56,096 persons report their dialect as Mūltānī and by 11,873 individuals report their dialect as Bahāwalpurī.[1] One dialects of Saraiki that is spoken by Indian Saraikis is Derawali, spoken by Derawals in Derawal Nagar, Delhi who migrated to India during the independence.[34] The dialects of Saraiki spoken in India are "Bahawalpuri (Bhawalpuri, Reasati, Riasati), Jafri, Jatki, Siraiki Hindki, Thali".[20] Saraiki is spoken in Karnal, Faridabad, Ballabhgarh, Palwal, Rewari, Sirsa, Fatehabad, Hisar, Bhiwani, Panipat districts of Haryana, some area of Delhi and Ganganagar district, Jaipur, Hanumangarh and Bikaner districts of Rajasthan.

In Afghanistan, Kandhari, a dialect of Multani Saraiki is a native language of the Hindki.[citation needed] Before the influx of Pathans into the region, the most common spoken dialect in Kandahar was Saraiki, namely the Kandhari or Jataki dialect.[5]

Saraiki and Sindhi both have somewhat similar consonant inventories.[17] This inventory includes phonemically distinctive implosive consonants, which makes Sindhi and Saraiki unusual among the Indo-European languages (and not just among the Indo-Aryan languages). According to Shackle, C. 1976. The Siraiki Language of Central Pakistan: A Reference Grammar. Unwin Brothers Limited. Saraiki has 48 consonants and 35 vowels.[35] In other work it is described that there are 58 consonants and 16 vowels in saraiki.[36]

There are three writing systems for Saraiki, though very few Saraiki speakers—even those literate in other languages—are able to read or write Saraiki in any writing system. The most common Saraiki writing system today is the Persian script, which has also been adapted for use on computers. Saraiki has a 45-letter alphabet including 39 of the Urdu alphabet and five letters unique to Saraiki. The Saraiki keyboard can also be used for other languages such as Standard dialect of Punjabi & Kashmiri. The Devanagari and Gurmukhi scripts, written from left to right, were used by Sikhs and Hindus.[37] Though not used in present-day Pakistan, there are still emigrant speakers in India who know Devanagari script for Saraiki.[38][39] Traders or bookkeepers wrote in a script known as Langdi, although use of this script has been significantly reduced in recent times. Likewise, a script related to the Landa scripts family, known as Multani, was previously used to write Saraiki.Preliminary Proposal to Encode the Multani Script in ISO/IEC 10646 is submitted by Anshuman Pandey, on 26-04-2011.[40] Saraiki Unicode has been approved in 2005.[41]

Here is an example of Saraiki poetry by Khwaja Ghulam Farid: Saraiki: اپڑیں ملک کوں آپ وسا توں ۔ پٹ انگریزی تھانے The transliteration from and to Persian and Devanagari scripts for Saraiki language can be made online.[42]

In India, the Devanagari script is also used to write Saraiki. A modern version was introduced by the government of India in 1948; however, it did not gain full acceptance, so both the Saraiki-Arabic and Devanagari scripts are used. In India a person may write a Sindhi language paper for a Civil Services Examination in either script [1]. Diacritical bars below the letter are used to mark implosive consonants, and dots called nukta are used to form other additional consonants.

Department of Saraiki, Islamia University, Bahawalpur was established in 1989[10] and Department of Saraiki, Bahauddin Zakariya University, Multan[11] was established in 2006. Saraiki is taught as subject in schools and colleges at higher secondary, intermediate and degree level. Allama Iqbal open university Islamabad,[12] and Al-Khair university Bhimbir have their Pakistani Linguistics Departments. They are offering M.Phil. and Ph.D in Saraiki. Associated Press of Pakistan has launched its site in Saraiki also.[43] 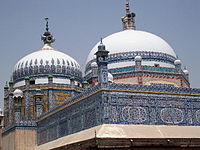 Khawaja Ghulam Farid (1845–1901), his famous collection is Deewan-e-Farid, and Sachal Sar Mast (1739–1829) are the most celebrated Sufi poets in Saraiki and their poems known as Kafi are still famous.

The beloved's intense glances call for blood
The dark hair wildly flows The Kohl of the eyes is fiercely black
And slays the lovers with no excuse
My appearance in ruins, I sit and wait
While the beloved has settled in Malheer I feel the sting of the cruel dart
My heart the, abode of pain and grief A life of tears, I have led Farid

Prime Minister Yousuf Raza Gilani on Monday said southern Punjab is rich in cultural heritage which needs to be promoted for next generations. In a message on the launch of Saraiki channel by Pakistan Television (PTV) in Multan, Prime Minister Gilani said the step would help promote the rich heritage of 'Saraiki Belt'.[44]

These are not dedicated Saraiki channels but play most programmes in Saraiki.