From Infogalactic: the planetary knowledge core
Jump to: navigation, search
This article is about the Indian city. For H. P. Lovecraft's fictitious city, see The Doom That Came to Sarnath.
"Isipathana" redirects here. For the school in Sri Lanka, see Isipathana College.

Sarnath is a city located 13 kilometres north-east of Varanasi near the confluence of the Ganges and the Gomati rivers in Uttar Pradesh, India. The deer park in Sarnath is where Gautama Buddha first taught the Dharma, and where the Buddhist Sangha came into existence through the enlightenment of Kondanna. Singhpur, a village approximately one km away from the site, was the birthplace of Shreyansanath, the Eleventh Tirthankara of Jainism, and a temple dedicated to him, is an important pilgrimage site.

Isipatana is mentioned by the Buddha as one of the four places of pilgrimage which his devout followers should visit, if they wanted to visit a place for that reason.[1] It was also the site of the Buddha's Dhammacakkappavattana Sutta, which was his first teaching after attaining enlightenment, in which he taught the four noble truths and the teachings associated with it.

Sarnath has been variously known as Mrigadava, Migadāya, Rishipattana and Isipatana throughout its long history. Mrigadava means "deer-park". Isipatana is the name used in the Pali Canon, and means the place where holy men (Pali: isi, Sanskrit: rishi) landed.

The legend says that when the Buddha-to-be was born, some devas came down to announce it to 500 rishis. The rishis all rose into the air and disappeared and their relics fell to the ground.[citation needed] Another explanation for the name is that Isipatana was so called because sages, on their way through the air (from the Himalayas), alight here or start from here on their aerial flight (isayo ettha nipatanti uppatanti cāti-Isipatanam). Pacceka Buddhas, having spent seven days in contemplation in the Gandhamādana, bathe in the Anotatta Lake and come to the habitations of men through the air, in search of alms. They descend to earth at Isipatana.[2] Sometimes the Pacceka Buddhas come to Isipatana from Nandamūlaka-pabbhāra.[3]

Xuanzang quotes the Nigrodhamiga Jātaka (J.i.145ff) to account for the origin of the Migadāya. According to him the Deer Park was a forest given by the king of Benares of the Jātaka, where deer might wander unmolested. The Migadāya was so-called because deer were allowed to roam about there unmolested.

Sarnath derives from the Sanskrit Sāranganātha,[4] which means "Lord of the Deer", and relates to another old Buddhist story in which the Bodhisattva is a deer and offers his life to a king instead of the doe the latter is planning to kill. The king is so moved that he creates the park as a sanctuary for deer. The park is still there today.

The Buddha went from Bodh Gaya to Sarnath about 5 weeks after his enlightenment. Before Gautama (the Buddha-to-be) attained enlightenment, he gave up his austere penances and his friends, the Pañcavaggiya monks, left him and went to Isipatana.[5]

After attaining Enlightenment the Buddha, leaving Uruvela, travelled to the Isipatana to join and teach them. He went to them because, using his spiritual powers, he had seen that his five former companions would be able to understand Dharma quickly. While travelling to Sarnath, Gautama Buddha had to cross the Ganges. Having no money with which to pay the ferryman, he crossed the Ganges through the air. When King Bimbisāra heard of this, he abolished the toll for ascetics. When Gautama Buddha found his five former companions, he taught them, they understood and as a result they also became enlightened. At that time the Sangha, the community of the enlightened ones, was founded. The sermon Buddha gave to the five monks was his first sermon, called the Dhammacakkappavattana Sutta. It was given on the full-moon day of Asalha Puja.[6] Buddha subsequently also spent his first rainy season at Sarnath[7] at the Mulagandhakuti. The Sangha had grown to 60 in number (after Yasa and his friends had become monks), and Buddha sent them out in all directions to travel alone and teach the Dharma. All 60 monks were Arahants.

Several other incidents connected with the Buddha, besides the preaching of the first sermon, are mentioned as having taken place in Isipatana. Here it was that one day at dawn Yasa came to the Buddha and became an Arahant.[8] It was at Isipatana, too, that the rule was passed prohibiting the use of sandals made of talipot leaves.[9] On another occasion when the Buddha was staying at Isipatana, having gone there from Rājagaha, he instituted rules forbidding the use of certain kinds of flesh, including human flesh.[10] Twice, while the Buddha was at Isipatana, Māra visited him but had to go away discomfited.[11]

Besides the Dhammacakkappavattana Sutta mentioned above, several other suttas were preached by the Buddha while staying at Isipatana, among them

Some of the most eminent members of the Sangha seem to have resided at Isipatana from time to time; among recorded conversations at Isipatana are several between Sariputta and Mahakotthita,[12] and one between Mahākotthita and Citta-Hatthisariputta.[13] Mention is made, too, of a discourse in which several monks staying at Isipatana tried to help Channa in his difficulties.[14]

According to the Udapāna Jātaka (J.ii.354ff ) there was a very ancient well near Isipatana which, in the Buddha's time, was used by the monks living there.

According to the Mahavamsa, there was a large community of monks at Isipatana in the second century B.C. For, we are told that at the foundation ceremony of the Mahā Thūpa in Anurādhapura, twelve thousand monks were present from Isipatana led by the Elder Dhammasena.[15]

Xuanzang[16] found, at Isipatana, fifteen hundred monks studying the Hīnayāna. In the enclosure of the Sanghārāma was a vihāra about two hundred feet high, strongly built, its roof surmounted by a golden figure of the mango. In the centre of the vihāra was a life-size statue of the Buddha turning the wheel of the Law. To the south-west were the remains of a stone stupa built by King Asoka. The Divy. (389-94) mentions Asoka as intimating to Upagupta his desire to visit the places connected with the Buddha's activities, and to erect thupas there. Thus he visited Lumbinī, Bodhimūla, Isipatana, Migadāya and Kusinagara; this is confirmed by Asoka's lithic records, e.g. Rock Edict, viii.

In front of it was a stone pillar to mark the spot where the Buddha preached his first sermon. Nearby was another stupa on the site where the Pañcavaggiyas spent their time in meditation before the Buddha's arrival, and another where five hundred Pacceka Buddhas entered Nibbāna. Close to it was another building where the future Buddha Metteyya received assurance of his becoming a Buddha.

Buddhism flourished in Sarnath in part because of kings and wealthy merchants based in Varanasi. By the third century Sarnath had become an important center for the arts, which reached its zenith during the Gupta period (4th to 6th centuries CE). In the 7th century by the time Xuanzang visited from China, he found 30 monasteries and 3000 monks living at Sarnath.

Sarnath became a major centre of the Sammatiya school of Buddhism, one of the early Buddhist schools. However, the presence of images of Heruka and Tara indicate that Vajrayana Buddhism was (at a later time) also practiced here. Also images of Brahminist gods as Shiva and Brahma were found at the site, and there is still a Jain temple (at Chandrapuri) located very close to the Dhamekh Stupa.

At the end of the 12th century Sarnath was sacked by Turkish Muslims, and the site was subsequently plundered for building materials.

Isipatana is identified with the modern Sarnath, six miles from Benares. Alexander Cunningham[17] found the Migadāya represented by a fine wood, covering an area of about half a mile, extending from the great tomb of Dhamekha on the north to the Chaukundi mound on the south.

According to the Buddhist commentarial scriptures, all the Buddhas preach their first sermon at the Migadāya in Isipatana. It is one of the four avijahitatthānāni (unchanging spots), the others being the bodhi-pallanka, the spot at the gate of Sankassa, where the Buddha first touched the earth on his return from Tāvatimsa, and the site of the bed in the Gandhakuti in Jetavana[18]

In past ages Isipatana sometimes retained its own name, as it did in the time of Phussa Buddha (Bu.xix.18), Dhammadassī Buddha (BuA.182) and Kassapa Buddha (BuA.218). Kassapa was born there (ibid., 217). But more often Isipatana was known by different names (for these names see under those of the different Buddhas). Thus in the time of Vipassī Buddha, it was known as Khema-uyyāna. It is the custom for all Buddhas to go through the air to Isipatana to preach their first sermon. Gotama Buddha, however, walked all the way, eighteen leagues, because he knew that by so doing he would meet Upaka, the Ajivaka, to whom he could be of service.[19]

The first five disciples pay respects to the Wheel of the Dharma at the deerpark of Isipatana. 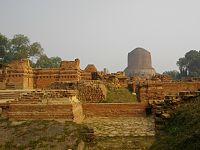 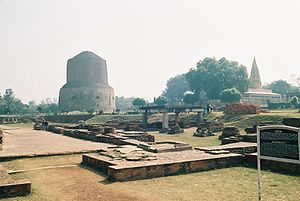 Archeological site at Sarnath (Dhamek stupa is visible in background)

Most of the ancient buildings and structures at Sarnath were damaged or destroyed by the Turks. However, amongst the ruins can be distinguished:

For Buddhists, Sarnath (or Isipatana) is one of four pilgrimage sites designated by Gautama Buddha, the other three being Kushinagar, Bodh Gaya, and Lumbini. 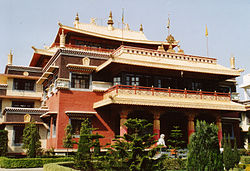 Temple of the Tibetan community in Sarnath 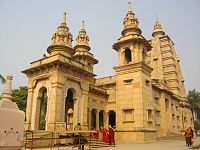 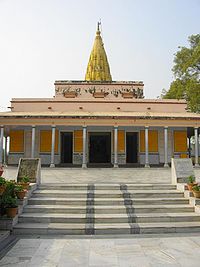 Sarnath has been developed as a place of pilgrimage, both for Buddhists from India and abroad. A number of countries in which Buddhism is a major (or the dominant) religion, among them Thailand, Japan, Tibet, Sri Lanka and Myanmar, have established temples and monasteries in Sarnath in the style that is typical for the respective country. Thus, pilgrims and visitors have the opportunity to experience an overview of Buddhist architecture from various cultures.