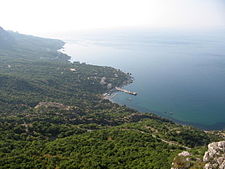 The Sarych headland on the northern shore of the Black Sea.

About 5 kilometers from the Sarych headland is the resort town of Foros. The city of Sevastopol is located about 30 km away and Yalta about 40 km. The length from Sarych to the Kerempe headland of Black Sea shore in Turkey is 142 miles, making it the narrowest point of the Black Sea.

A lighthouse is located on the headland, which from 2005, was the subject of a controversy between Ukraine and Russia. From August 3, 2005, the lighthouse is occupied by the Russian Army.[1]

Not paying attention to the ruling of the Government Court in Sevastopol on the subject of the return of 77 geographical objects to Ukraine (including the lighthouse on Sarych), Russian military officials referred to the fact that they only subordinate to the chief of the Russian Navy headquarters and no one else. The Ukrainian public activists state that Sarych is illegally occupied by the Russian Navy.[2] As a military object the territory around the Sarych headland is closed to trespassers with barbed wire with the Russian flag flying above Sarych.[3]

The issue has since become small part of the broader 2014 Crimean crisis.

On 18 November 1914 the waters off Cape Sarych saw the encounter of a Russian and Turkish naval force. The latter consisted of the German battle-cruiser SMS Goeben and the light cruiser SMS Breslau. Both ships were formally purchased by the Ottoman Empire and renamed as Yavuz and Midilli, although they retained their German crews. The Russian force consisted of five pre-dreadnought battleships. During the fight only a few salvoes were exchanged. The forces inflicted minor damage upon each other, but the commanding German admiral Wilhelm Souchon broke off the action after Goeben took a hit in one of her 15 cm casemates. He had to be very careful in putting his ship at risk, as the Ottoman Empire didn't provide facilities for repairing a modern ship like the Goeben. So he had to keep her in a battleworthy state.[4]