Saul Perlmutter (born September 22, 1959) is an American astrophysicist at the Lawrence Berkeley National Laboratory and a professor of physics at the University of California, Berkeley. He is a member of the American Academy of Arts & Sciences, and was elected a Fellow of the American Association for the Advancement of Science in 2003. He is also a member of the National Academy of Sciences. Perlmutter shared both the 2006 Shaw Prize in Astronomy, the 2011 Nobel Prize in Physics, and the 2015 Breakthrough Prize in Fundamental Physics with Brian P. Schmidt and Adam Riess for providing evidence that the expansion of the universe is accelerating.

Saul Perlmutter was born one of three children in the Ashkenazi Jewish family of Daniel D. Perlmutter, professor emeritus of chemical and biomolecular engineering at University of Pennsylvania, and Felice (Feige) D. Perlmutter (née Davidson), professor emerita of Temple University’s School of Social Administration.[2][3] His maternal grandfather, the Yiddish teacher Samuel Davidson (1903–1989), emigrated to Canada (and then with his wife Chaika Newman to New York) from the Bessarabian town of Floreşti in 1919.[4]

Perlmutter spent his childhood in the Mount Airy neighborhood of Philadelphia. He went to school in nearby Germantown; first Greene Street Friends School for the elementary grades, followed by Germantown Friends School for grades 7 through 12.[5] He graduated with an AB in physics from Harvard magna cum laude in 1981 and received his PhD in physics from the University of California, Berkeley, in 1986. Perlmutter's PhD thesis titled "An Astrometric Search for a Stellar Companion to the Sun"[6] described the development and use of an automated telescope to search for Nemesis candidates under Richard A. Muller.[1] At the same time, he was using this telescope to search for Nemesis and supernovae, which would lead him to his award winning work in cosmology.[7] Perlmutter attributes the idea for an automated supernova search to Luis Alvarez, a 1968 Nobel laureate, who shared his idea with Perlmutter's research adviser.[7]

Perlmutter heads the Supernova Cosmology Project at Lawrence Berkeley National Laboratory. It was this team along with the competing High-z Supernova Search Team led by Riess and Schmidt, which found evidence of the accelerating expansion of the universe based on observing Type Ia supernova in the distant universe. Type Ia supernova occurs whenever a white dwarf star gains enough additional mass to pass above the Chandrasekhar limit, usually by stealing additional mass from a companion star. Since all Type Ia supernovae are believed to occur in essentially the same way, they form a standard candle whose intrinsic luminosity can be assumed to be approximately the same in all cases. By measuring the apparent luminosity of the explosion from Earth, researchers can then infer the distance to supernova. Comparing this inferred distance to the apparent redshift of the explosion allows the observer to measure both the distance and relative velocity of the supernova.

The Supernova Cosmology Project concluded that these distant supernovae were not receding as quickly as would be expected due to the Hubble expansion alone, and, by inference, the expansion of the universe must have been accelerated over the billions of years since the supernovae occurred. The High-z Team also came to a similar conclusion. The two teams' reports were published within weeks of each other, and their conclusions were readily accepted by the scientific community due to corroborating theories.[8] This conclusion has subsequently been supported by other lines of evidence. These findings reinvigorated research into the nature of the universe, and especially into the role of dark energy.[8] For this work Perlmutter was awarded the 2011 Nobel Prize in Physics, shared jointly with Riess and Schmidt.[8]

Perlmutter is also a lead investigator in the Supernova/Acceleration Probe project, which aims to build a satellite dedicated to finding and studying more supernovae in the distant universe. This will help to better constrain the rate at which the universe is accelerating.

He is also a participant in the Berkeley Earth Surface Temperature project, which aims to increase our understanding of recent global warming through improved analyses of climate data.

Perlmutter is a professor and currently teaches at UC Berkeley. 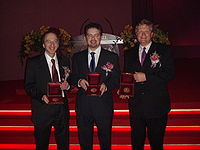 Perlmutter, Adam Riess, and Brian P. Schmidt being awarded the 2006 Shaw Prize in Astronomy. The trio would later be awarded the 2011 Nobel Prize in Physics. 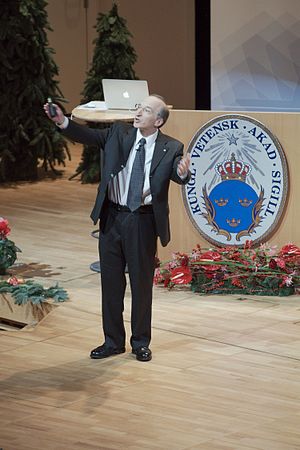 In 2002, Perlmutter won the Department of Energy's E. O. Lawrence Award in Physics. In 2003, he was awarded the California Scientist of the Year Award, and, in 2005, he won the John Scott Award and the Padua Prize. In 2006, he shared the Shaw Prize in Astronomy with Adam Riess and Brian P. Schmidt.[9] The same year, Perlmutter won the Antonio Feltrinelli International Prize.

Perlmutter and his team shared the 2007 Gruber Cosmology Prize (a $500,000 award) with Schmidt and the High-Z Team for discovering the accelerating expansion of the universe.

In 2010, Perlmutter was named a Miller Senior Fellow of the Miller Institute at the University of California Berkeley.

In 2011, Perlmutter and Riess were named co-recipients of the Albert Einstein Medal.

Perlmutter, Schmidt, Riess and their teams shared the 2015 Breakthrough Prize in Fundamental Physics with $3 million to be split among them.[10]

Saul Perlmutter has two sisters: Shira Perlmutter (b. 1956), a lawyer, and Tova Perlmutter (b. 1967), a nonprofit executive. He is married to Laura Nelson, an anthropologist at University of California, Berkeley, and has one daughter, Noa.[11]

Reference to Saul Perlmutter was made on the popular CBS television comedy series The Big Bang Theory during the 2011 episode "The Speckerman Recurrence". In the episode, the character Sheldon Cooper watches the Nobel award ceremony on his laptop, and jealously berates Perlmutter: "Look at Dr. Saul Perlmutter up there, clutching that Nobel prize. What's the matter Saul, you afraid somebody's going to steal it? Like you stole Einstein's cosmological constant?" Then later: "Oh, now Perlmutter's shaking the King's hand. Yeah, check for your watch, Gustaf, he might have lifted it."

Perlmutter was also referenced in "The Rhinitis Revelation", another 2011 episode of The Big Bang Theory. In a conversation with his mother, Sheldon says, "I’ve got a treat for us tomorrow, Mom. I’m taking you to see Saul Perlmutter give a lecture about his Nobel Prize-winning work in cosmology. And the best part is, at the Q and A afterward, I’ve worked up a couple of Q’s that will stump his sorry A." Later in the episode, Sheldon criticises the lecture and questions the decision to award Perlmutter a Nobel Prize.