Ṣawm (Arabic: صوم‎‎; plural: صيام ṣiyām) is an Arabic word for fasting regulated by Islamic jurisprudence. In the terminology of Islamic law, sawm means to abstain from eating and drinking during daylight hours. The observance of sawm during the Islamic holy month of Ramadan is one of the Five Pillars of Islam, but is not confined to that month.

Ṣawm is derived from Syriac: ܨܘܡܐ‎ ṣawmā. Literally, it means "to abstain", cognates to Hebrew tsom.[1]Fasting is not unique to the Muslims. It has been practiced for centuries in connection with religious ceremonies by Christians, Jews, Confucianists, Hindus, Taoists, and Jains. However Islam is the only religion that has retained the outward and spiritual dimensions of fasting throughout the centuries.[2]

For example, the Muslims of Central Asia, Afghanistan, India, Iran, Bangladesh, Pakistan and Turkey use the words roza/rozha/roja/oruç, which comes from Persian. While the Malay community in Malaysia, Brunei and Singapore call it puasa, which is derived from Sanskrit, upvaasa, puasa is also used in Indonesia, Southern Thailand and Southern Philippines.

Muslims are prohibited from eating, drinking and engaging in conjugal sexual relationships from dawn (fajr) to sunset (maghrib). Fasting helps Muslims develop self-control, gain a better understanding of God’s gifts and greater compassion towards the deprived. Fasting in Islam involves abstaining from all bodily pleasures between dawn and sunset.. Not only is food forbidden, but also any sexual activity. All things which are regarded as prohibited is even more so in this month, due to its sacredness. Each and every moment during the fast, a person suppresses their passions and desires in loving obedience to God. This consciousness of duty and the spirit of patience helps in strengthening one's faith. Fasting helps a person gain self-control. A person who abstains from permissible things like food and drink is likely to feel conscious of his sins. A heightened sense of spirituality helps break the habits of lying, staring with lust at the opposite sex, gossiping, and wasting time.[3] Fasting is also viewed as a means of controlling one's desires (of food, drink and sex) and focusing more on devoting oneself to God.

Sawm also carries a significant spiritual meaning. It teaches one the principle of God Consciousness: because when one observes fasting, it is done out of deep love for God and to learn self-restraint. As mention in the Quran:"O you who have believed, decreed upon you is fasting as it was decreed upon those before you that you may become righteous"[4]

Fasting in the Quran

In the Quran, this practice is mentioned:

Types of Fasting in the Quran

“The intention (niyyah) means resolving to fast. It is essential to have the intention the night before, night by night, in Ramadaan.”[11][12]

Throughout the duration of the fast itself, Muslims will abstain from certain provisions that the Quran has otherwise allowed; namely eating, drinking and sexual intercourse.[Quran 2:187] This is in addition to the standard obligation already observed by Muslims of avoiding that which is not permissible under Quranic or shari'a law (e.g. ignorant and indecent speech, arguing and fighting and lustful thoughts). Without observing this standard obligation, sawm is rendered useless and is seen simply as an act of starvation. The fasting should be a motive to be more benevolent to the fellow-creatures. Charity to the poor and needy in this month is one of most rewardable worship.

If one is sick, nursing or travelling, one is considered exempt from fasting. Any fasts broken or missed due to sickness, nursing or traveling must be made up whenever the person is able before the next month of Ramadan. According to the Quran, for all other cases, not fasting is only permitted when the act is potentially dangerous to one's health - for example, those who are sick, elderly, or on a journey, and women who are menstruating, pregnant, or nursing are permitted to break the fast, but this must be made up by paying a fidyah which is essentially the iftaar, dinner and suhur for a fasting person who requires such financial help.[13]

According to the Quran and the Sunnah,[14] if someone cannot afford fasting due to illness or traveling they are permitted to suspend fasting and continue at a more opportune time or condition of health. However, the question of those suffering a permanent disease has not been resolved. One view is that they can waive the obligation to fast if advised by a medical expert. Furthermore, it is held that they can provide a poor person with a meal for each day of fasting waived. Nonetheless, such a delinquent person must be willing to fast when in health.

Muslim scholars have stated that observing the fast is forbidden for menstruating women. However, when a woman's period has ceased, she must bathe and continue fasting. Any fasts broken or missed due to menstruation must be made up whenever she can before the next month of Ramadan. Women must fast at times when not menstruating, as the Quran indicates that all religious duties are ordained for both men and women. The Reasons for this is because the Quran refers to Menstruation as "Say: It is a discomfort(Menstruation)" According to Nouman Ali Khan an Islamic speaker in the United States the reason for this prohibition is because of the pain associated with it. A Muslim women may still do dhikr(remembrance of Allah) and make duaa(supplication to Allah) during this time. [15] [16]

Fasting is obligatory for a person if he or she fulfills five conditions:

2-He or She is accountable (Islamic past the age of puberty).

4-He or She is settled (not travelling).

5-There are no impediments to fasting such as sickness, extreme pain from injury, breastfeeding, or pregnant.[17]

Breaking the fast and the consequences

Breaking oaths and the consequences

If an oath is given and circumstances dictate that it must be broken (or if the one giving the oath deliberately breaks it), one must offer expiation (kaffara) by freeing a slave and if that is not possible, feed or clothe ten poor people and if that cannot be done because due to lack of financial means or poor people cannot be found, fast for three consecutive days.[21] 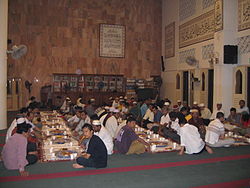 Ending the fast at a mosque

Beginning and ending the fast

In accordance with traditions handed down from Muhammad, Muslims eat a pre-dawn meal called the suhur. All eating and drinking must be finished before azaan-ul-Fajr, the pre-dawn call to prayer. Unlike the Salat-ul-Zuhr and Salat-ul-Maghrib prayers, which have clear astronomical definitions (after-noon and after-sunset), there are several definitions used in practice for the timing of "true dawn" (al-fajr as-sadiq), as mentioned in the hadith. These range from when the center of the sun is 12 to 21 degrees below the horizon[22] which equates to about 40 to 60 minutes before civil dawn. There are no restrictions on the morning meal other than the restrictions on Muslim diet. After completing the suhur, Muslims recite the fajr prayer. No food or beverage are allowed to go down the throat after the suhur. However, water unlike food may enter the mouth, but not go down the throat during wudu.

The meal eaten to end the fast is known as al-Iftar. Muslims, following the Sunnah of the Prophet Muhammad, break the fast with dates and water, before praying Salat-ul-Maghrib, after which they might eat a more wholesome meal.

Fasting is said to inculcate a sense of fraternity and solidarity with the needy and hungry.[23] Most importantly, the fast is also seen as a great sign of obedience by the believer to God.[24] Faithful observance of the sawm is believed to atone for personal faults and misdeeds and to help earn a place in Paradise.

Sawm is intended to teach believers patience and self-control in their personal conduct, to help control passions and temper, to provide time for meditation and to strengthen one's faith. Fasting also serves the purpose of cleansing the inner soul and freeing it of harm. Some scholars, following the earliest understanding of the uses and objectives of the ritual of fasting strongly object to identifying mundane objectives of the ritual such as physical and psychological well being. To them the ritual of fasting is purely a worship and should not be treated as an exercise mixed with worship. The objectives of the fast is to inculcate taqwa (God-consciousness) in a believer. As mentioned earlier, fasting can also be observed voluntarily (as part of the Greater Jihad).

Fasting on a long hot day carries a risk of dehydration. However, if one is at medical risk of dehydration, which leads to serious consequences, then it is permitted to break one's fast. An increase of negative health affects are observed exclusively during the month of Ramadan due to fasting, such as migraines,[25][26][27] tachycardia, severe headaches, dizziness, nausea, vomiting, circulatory collapse,[28] and sleeping problems.[29][30]

Fasting in the month of Ramadan is considered Fard. [37]

If you have an oath, for example: "If I graduate with a good mark, I will fast for three days for God" then one must fulfil this. This type of fasting is considered obligatory. Breaking the oath will result in a sin.

Days when fasting is forbidden

Although fasting is considered a pious act in Islam, there are times when fasting is prohibited:

Fasting while in polar region

The opinion adopted by Al-Azhar and most Muftis is to follow in fasting and praying the nearest Islamic region (or country) or follow Mecca or Medina. This fatwa is based on the authentic hadith in Sahih Muslim about Dajjal : No. 7015 also here 7015:

We said: 'God's Messenger, would one day's prayer suffice for the prayers of day equal to one year? Thereupon he said: No, but you must make an estimate of time (and then observe prayer).'[39]

We said: 'O Messenger of God, on that day which is like a year, will the salat (prayers) of one day be sufficient for us?' He said: 'No. Calculate the time (for prayer).'

Fasting in other religions

Lent in Culture Christianity, Yom Kippur, Tisha B'av, Fast of Esther, Tzom Gedalia, the Seventeenth of Tamuz, and the Tenth of Tevet, all in Judaism, are also times of fasting.[41] Nevertheless, the fasting practices are different from one another. Eastern Orthodox Christians fast during specified fasting seasons of the year, which include not only the better-known Great Lent, but also fasts on every Wednesday and Friday (except on special holidays), together with extended fasting periods before Christmas (the Nativity Fast), after Easter (the Apostles Fast) and in early August (the Dormition Fast). Members of The Church of Jesus Christ of Latter-day Saints (Mormons) generally fast for 24 hours on the first Sunday of each month. Like Muslims, they refrain from all drinking and eating unless they are children or are physically unable to fast. Fasting is also a feature of ascetic traditions in religions such as Hinduism and Buddhism. Mahayana traditions that follow the Brahma's Net Sutra may recommend that the laity fast "during the six days of fasting each month and the three months of fasting each year" [Brahma's Net Sutra, minor precept 30]. Members of the Baha'i Faith observe a Nineteen Day Fast from sunrise to sunset during March each year.